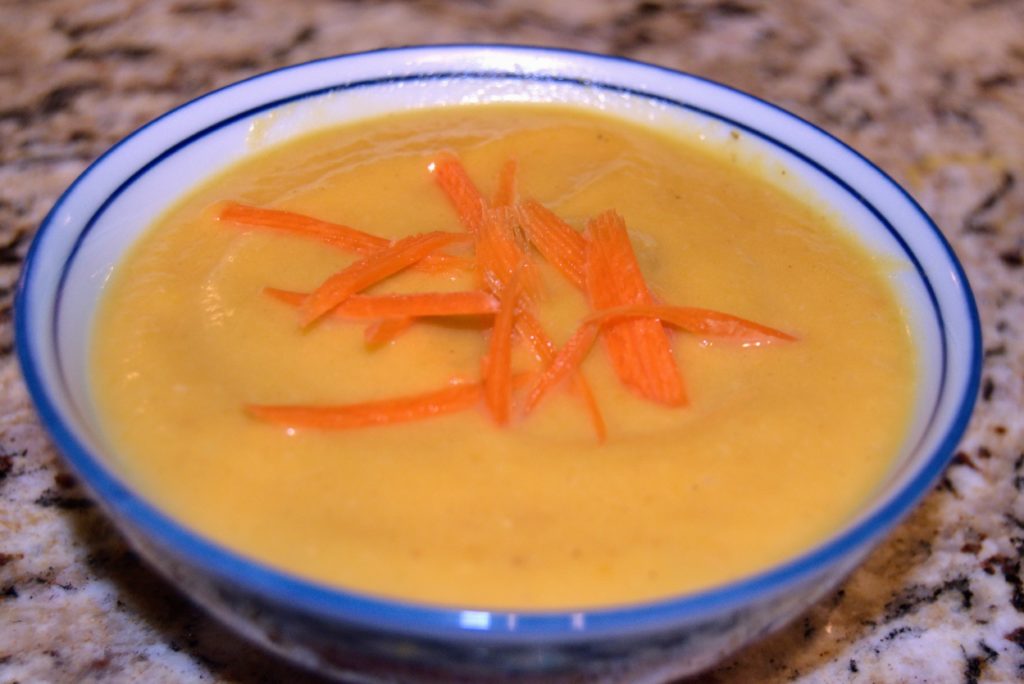 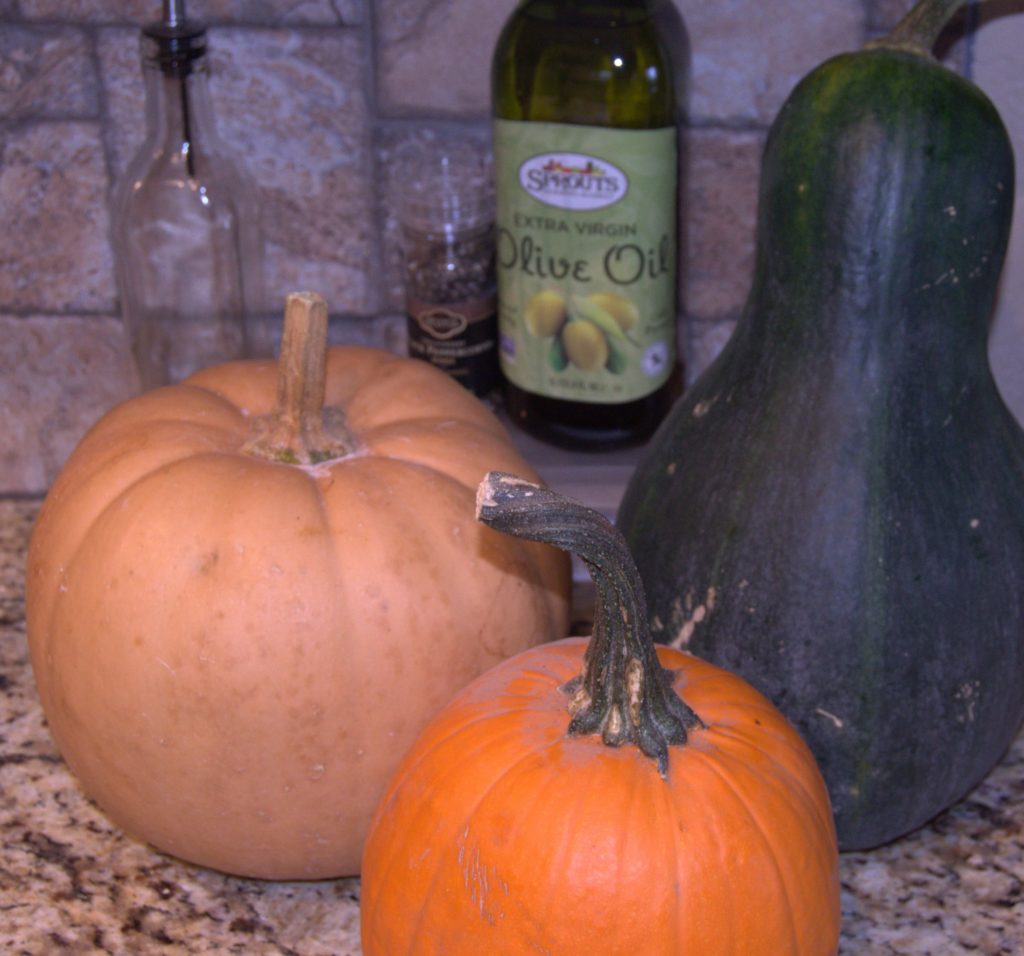 Steve and Willie never arrive empty-handed. They are my drinking buddies, musical cohorts, fellow foodies and, lastly, just happen to be my aunt and uncle. Steve has the dubious honor of being my father’s younger brother. They live about six hours north of me in the wilds of Missouri and came through Norman on their way back from visiting family in Texas. Despite being the last port of call on their Thanksgiving cruise, they did not disappoint in the gift department.

Steve invariably finds a way to link me to my family origins. I still refer to the family-tree that he kindly thought to draw out for me so that I would understand the difference between the rogue uncle who ran slot machines on New York’s lower east side from the rogue uncle who had a respectable business printing board-games in the front of house and pictures of naked ladies in the back. The latter is said to have lost a number of fingers trying to get paper in and out of the presses quickly. Who knew that board-games were in such high demand?

In the goody-bag this time was a simple brass puzzle that he told me had been his father’s (my grandfather’s) and had been given to him and never solved. If any of you know the secret of how to remove the cord without cutting it, [please let me know. There was also a bottle of 12-year-old single malt scotch and three types of squash – only one of which bore a pedigree.

“Isn’t that some kind of Acorn Squash?”, I inquired.

“Well,” assured Willie “The best that we know is that there was an acorn squash involved somewhere in the works. It sure does have that color. That’s a butternut shape though. It’s a volunteer from the compost heap. We found it growing there and thought that you would enjoy it.” 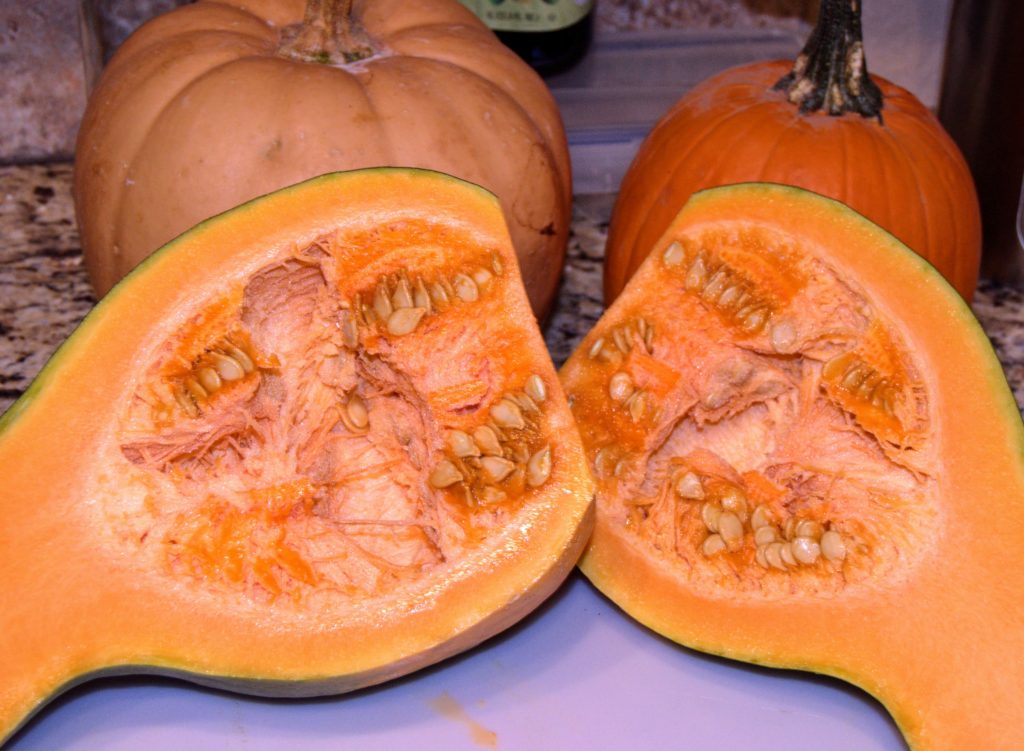 I always liked the idea of salting and drying/baking the seeds in the oven, but have never found the end product to be anywhere near as exciting as the idea. I scooped them out and tossed them with a wistful sigh. 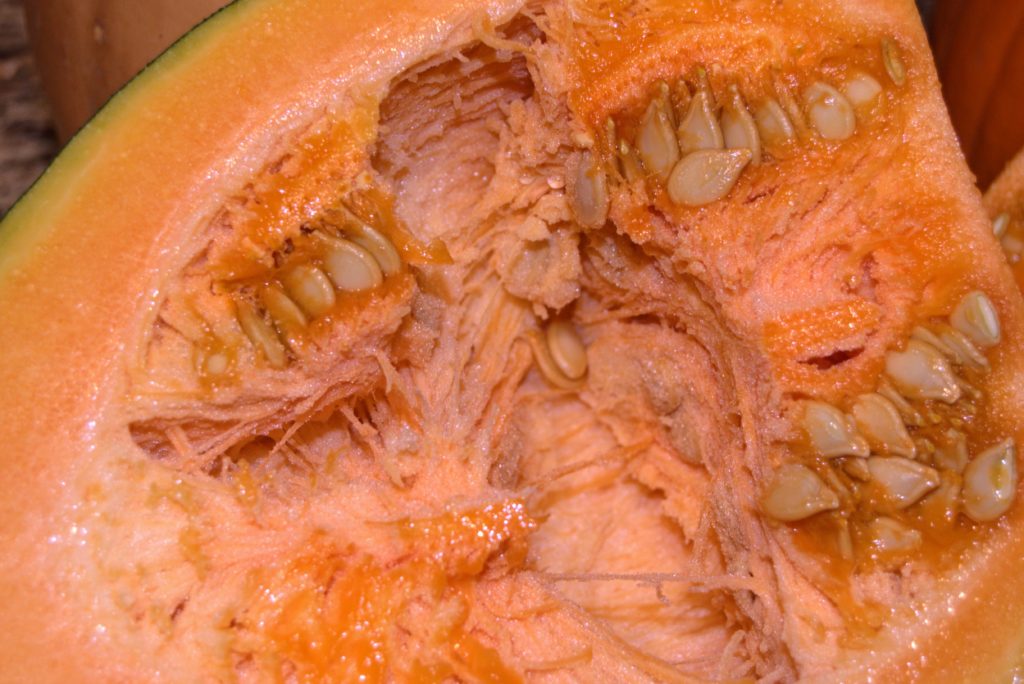 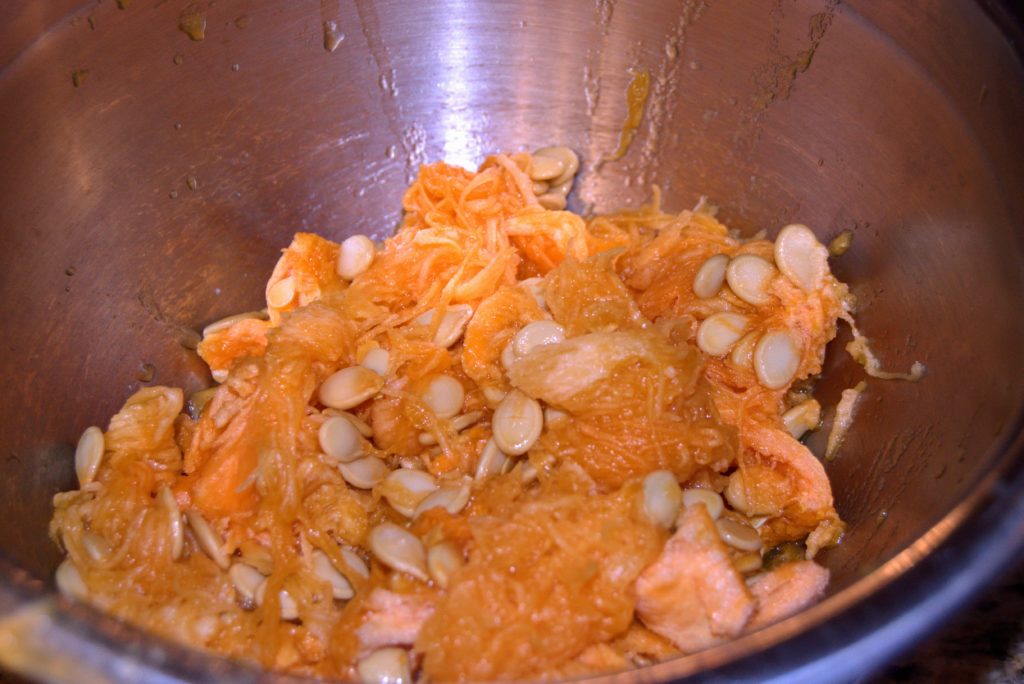 Whether you have a robust peeler or wield a chef’s knife like a ninja, remove the hard outside skin and chunk the squash ready for a 375 degree oven. 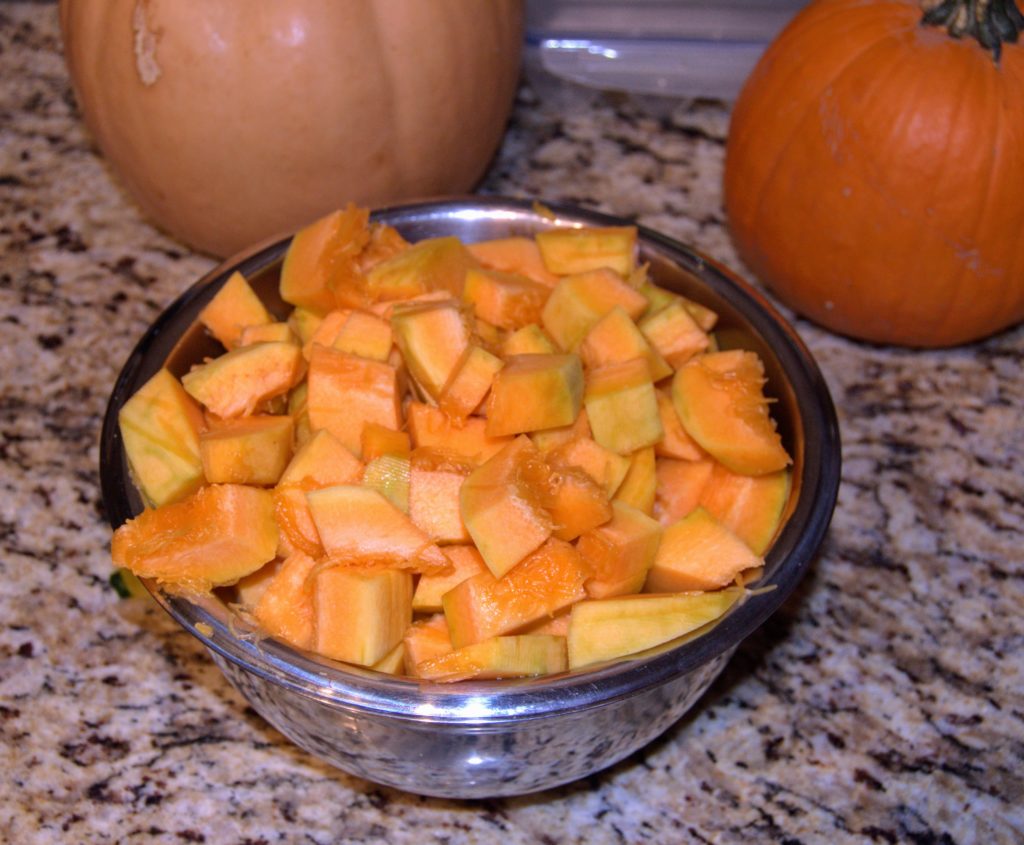 Place the chunks on a cookie sheet or metal casserole and toss in EVOO. Then add your flavoring spices. 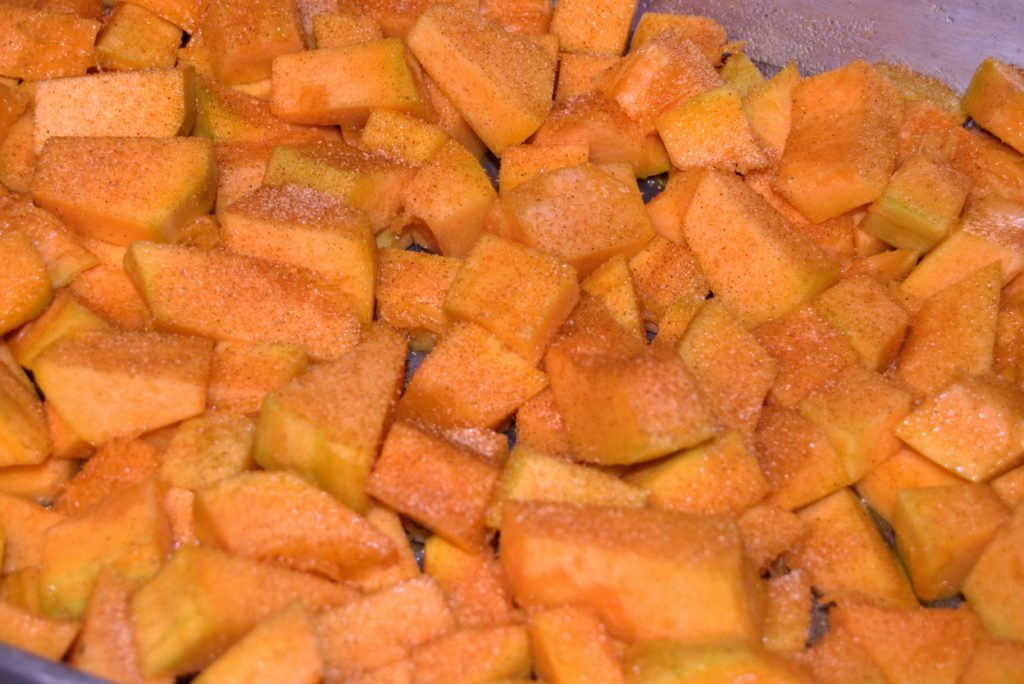 In this instance, I used a stand-by blend that I like to use and is colloquially known as Soul-Food Seasoning. In fact, it is actually a blend that varies from household to household. I gave a recipe for one version in my post on Ribs and Greens. Here is another:

Place this in an oven for 60-90 minutes, depending on the size of your chunks and the amount of EVOO. Start checking after an hour. 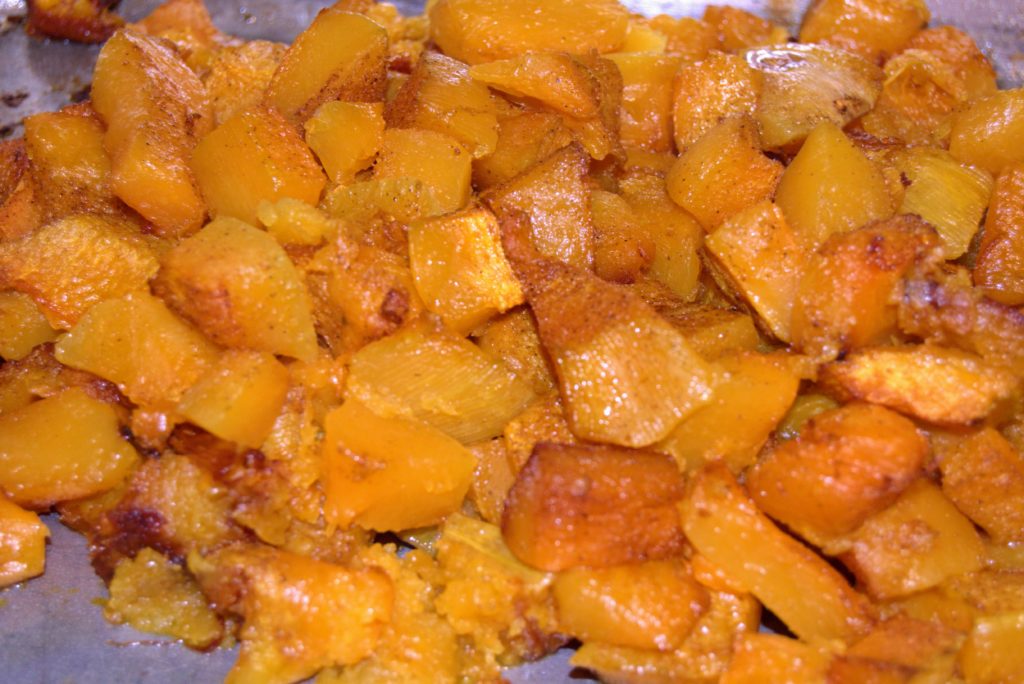 Your squash is ready when it is soft and caramelized.

Spoon the squash into a blender in small enough batches so that it will blend smoothly. This will depend on the quality of your blender. You should have a good idea of what you equipment will handle. 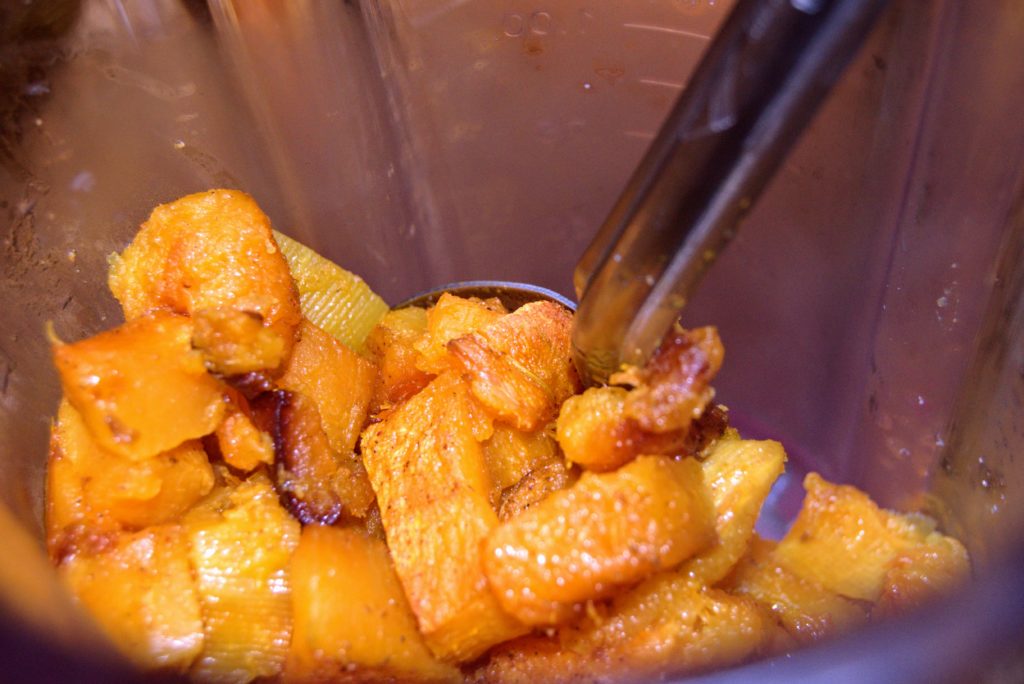 Apparently I added some leeks at the end of the baking period. Do not put them in with the squash from the start. They will cook too long. Add them about half way through.

Once you have your squash pure, add some of the stock from the first part of this blog and you have delicious, smokey, squash soup. 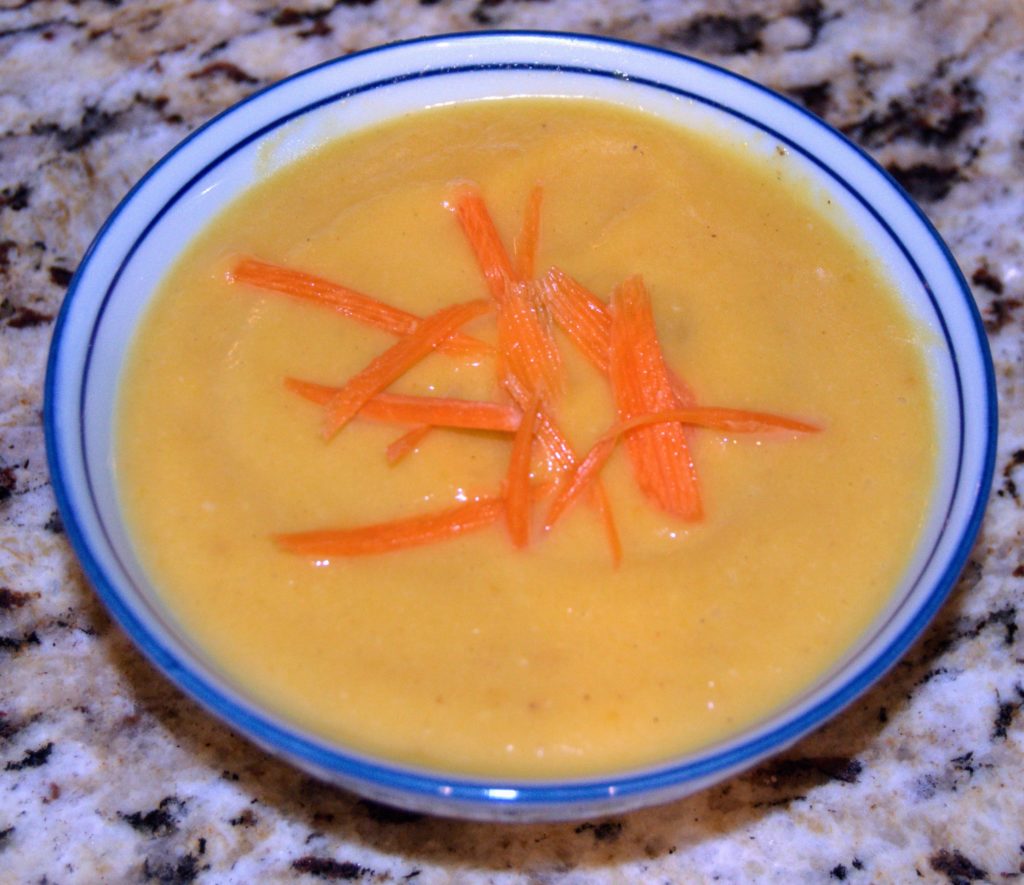 « Holiday Leftovers – Part One
Spaghetti with Mushrooms, Bacon and Basil »