You are here: Home / Chicken / THE GREAT CHICKEN ADVENTURE! PT. 4: Something to crow about. 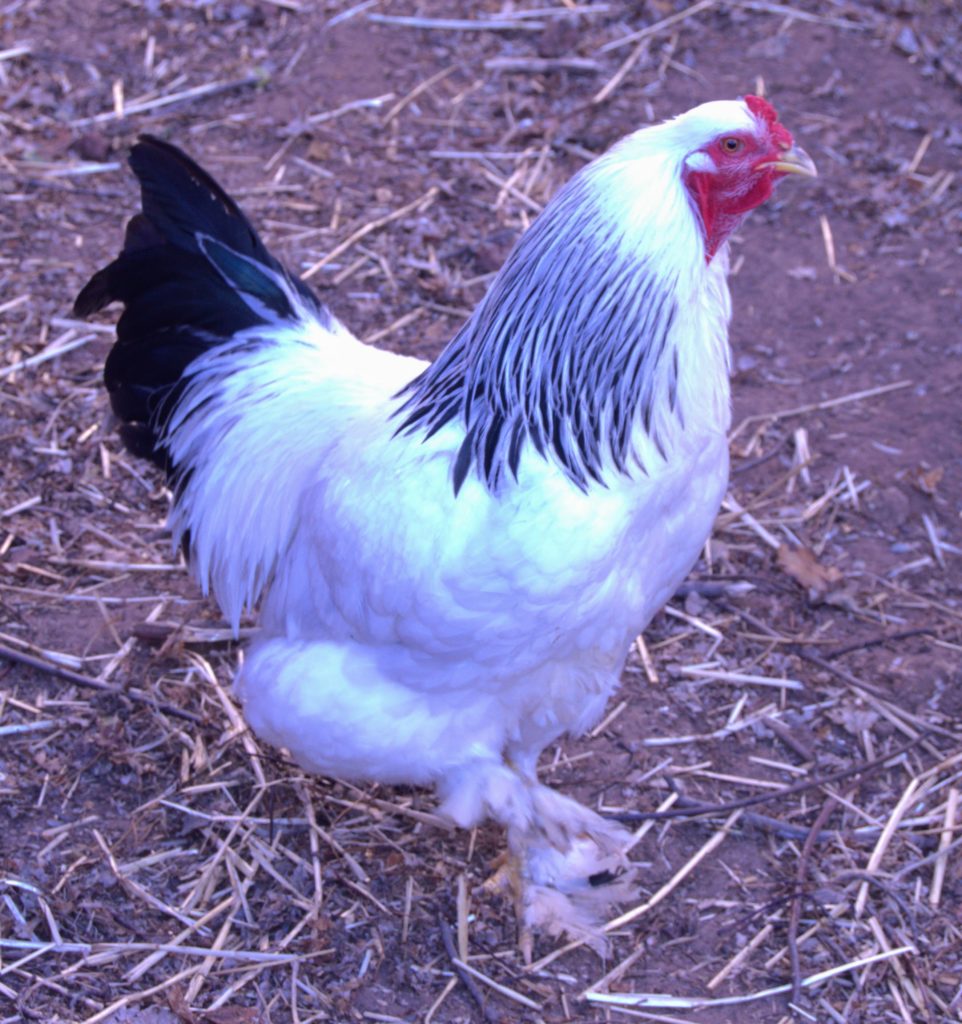 Baltimore Dennis is not a man to mince words. I met him in the spring last year as he relocated his family from Baltimore MD to Oklahoma. He is the one who got me interested in raising chickens. He spoke enthusiastically about his flock and was clearly sad that he had to leave them behind,

As I became more interested, so Baltimore Dennis became more supportive. Clearly, I was now his substitute chicken farmer, Instead of buying a flimsy coop that would not last, I took his advice and built my own – solid and dependable. I was ready for my flock.

The girls rode home in the back of my Jag and I was tickled to be a backyard chicken farmer. I sent pictures of the girls to Dennis and received a curt reply.

“Sorry to say this pal, but you got yourself a roo.”

He was suggesting that one of my girls was a boy. Roo – as in rooster,

It happens more often than you think. About 25% of the time, apparently. However, they were too young and the pictures were too indistinct for him to be right. It wasn’t until I had guests stay over and the stumbled from the guest bedroom – located right in front of the chicken coop so that I can check on the girls from the house – that we had confirmation.

“I hate to tell you this, but one of your hens is crowing!”

One quick check and it was readily apparent that Baltimore Dennis had been correct. Abigail was, in fact, a rooster.

Abigail became Abi and I was now one hen down…

That was until I was telling the story to Trevor across the closing table. He had just signed the papers on a new home. We were kicking our heels while the document packages were being signed. 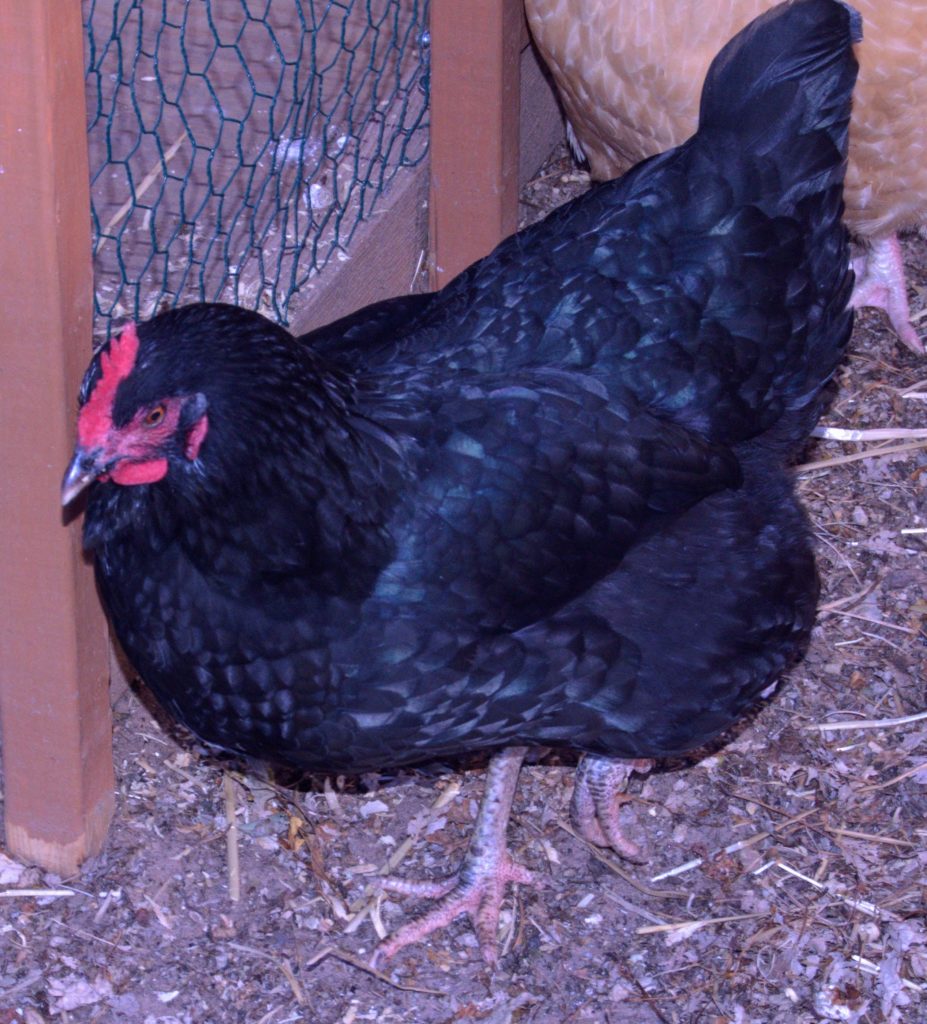 His father had gone a little crazy and bought 3,000 chicks at 5 cents a bird. That was several months ago and, while he had made a tidy profit selling pullets at $8.00 each, they still had hundreds of chickens on their hands.

“You want to come back to the house right now and pick yourself up a chicken?”

I followed his truck out to the pens behind their house. Indeed, there were hundreds of birds of various varieties, all about the same age as my existing flock..

“At the risk of being greedy, do you think that I could have two?”, I asked. 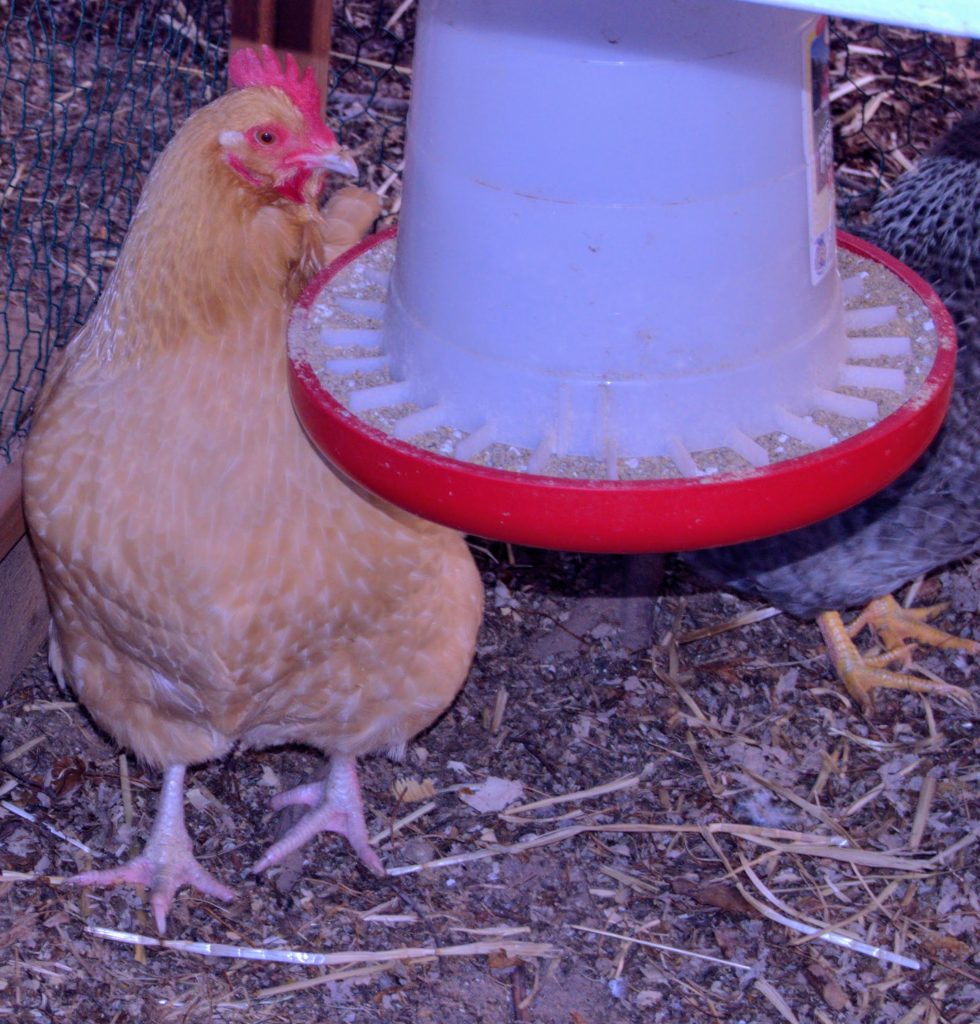 There was method to my madness. A single new bird was likely to be bullied by the original hens. Two, on the other hand, would be able to look after each other and keep each other company.

And so, Gentle Reader, Evadne and Franchesca came home with me that day. I can’t tell if they are Orpingtons or Australorps (a variation on the Orpington). They are big and boxy – fine specimens of generic chickens, who should be heavy-duty egg producers. Egg production weighed heavily on my mind. All of my girls (and my new-found boy) were now about six-months old and should be laying. I had nothing to show and was beginning to fear that they might all be boys!

Not knowing any better, I threw the new girls in with the flock and watched as the fun began. They were chased off the food and kept on the peripheral of the flock. Franchesca seemed willing to stick up for herself, but Evadne, despite her size, was clearly the bottom of the pecking order. 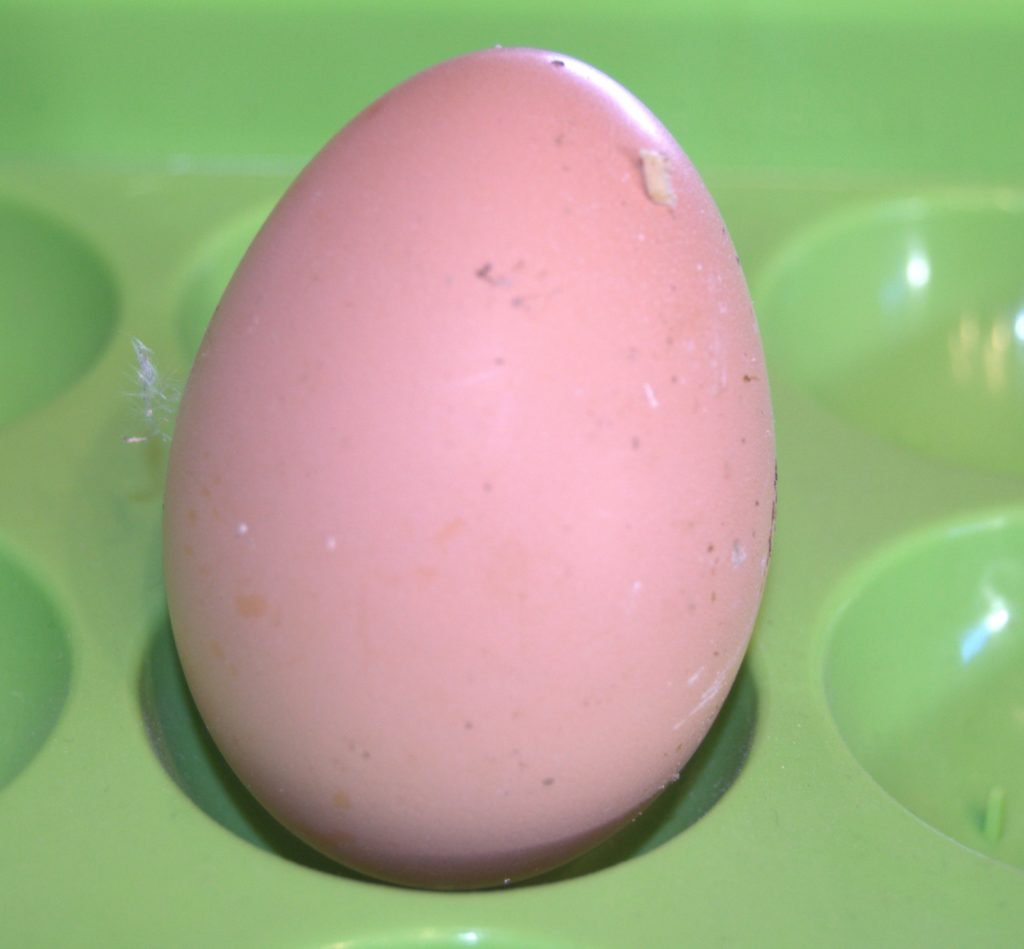 Slowly, the old-timers have begun to accept the new girls and a few days before Christmas, Constance presented me with the very first egg. Three days ago Delores contributed her very first blue-green egg. 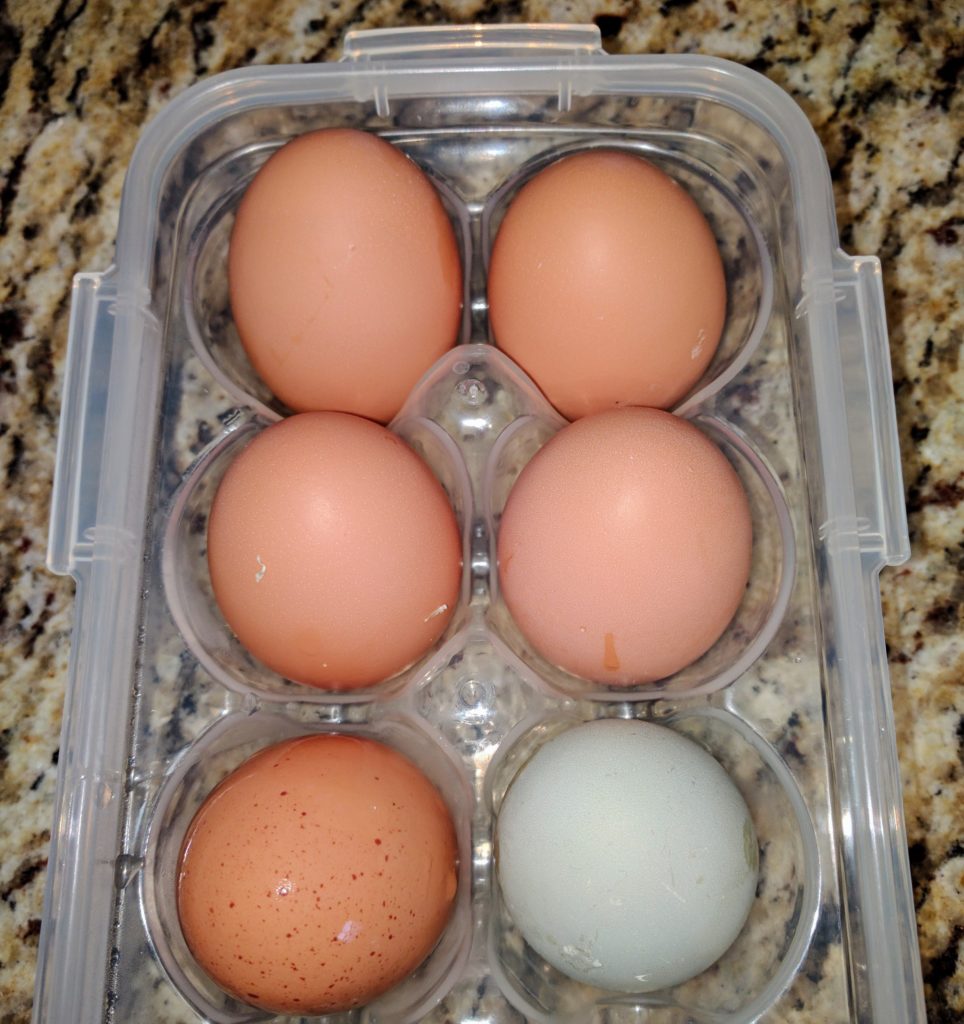 The flock are happy – a little different than I imagined, but happy. Winter is here and the girls have encountered their first snow. Connie and Delores are laying eggs and the other girls are sure to follow soon.

The building of a coop and the arrival of chickens has enriched my life so much more than I could ever have anticipated. They are now providing gifts of eggs. All is well in the hen-house. 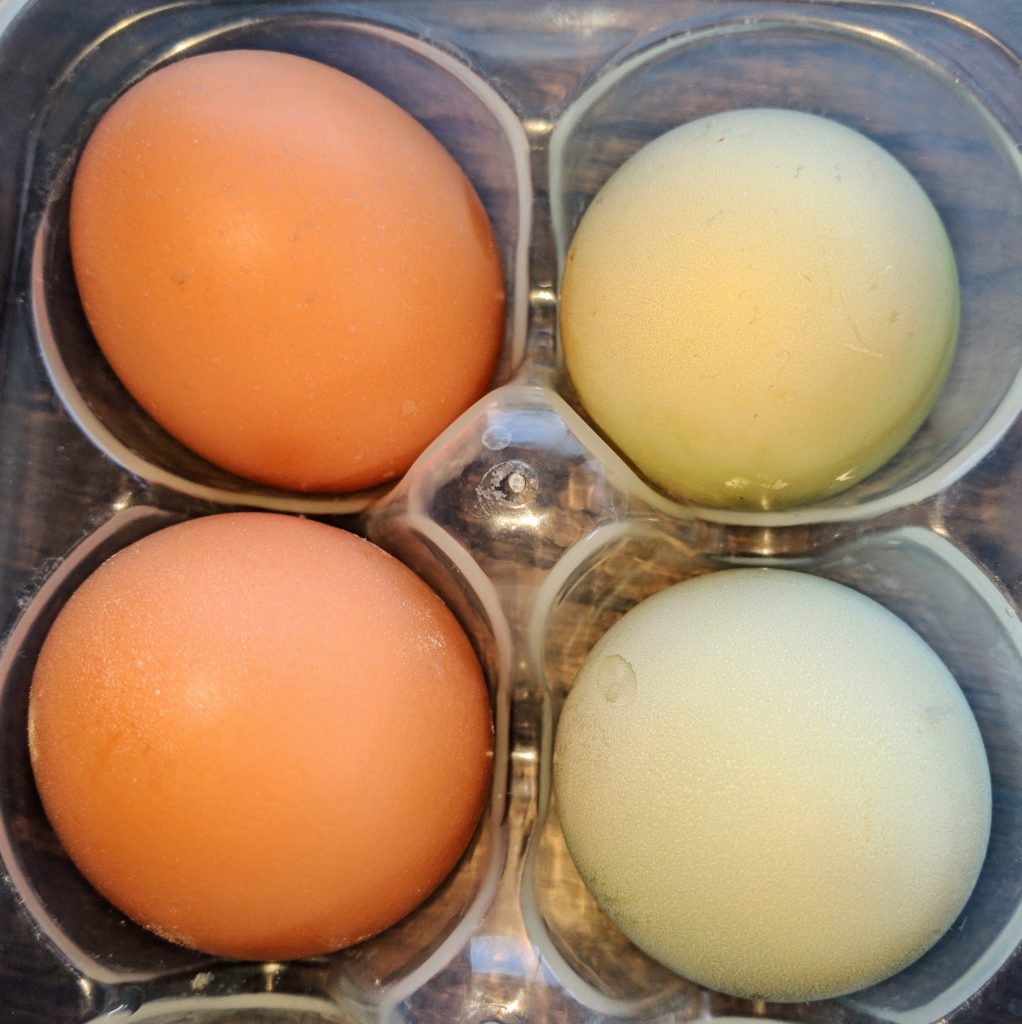