You are here: Home / Cooking tools / Tools of the Trade: Romertopf Pork and Prunes 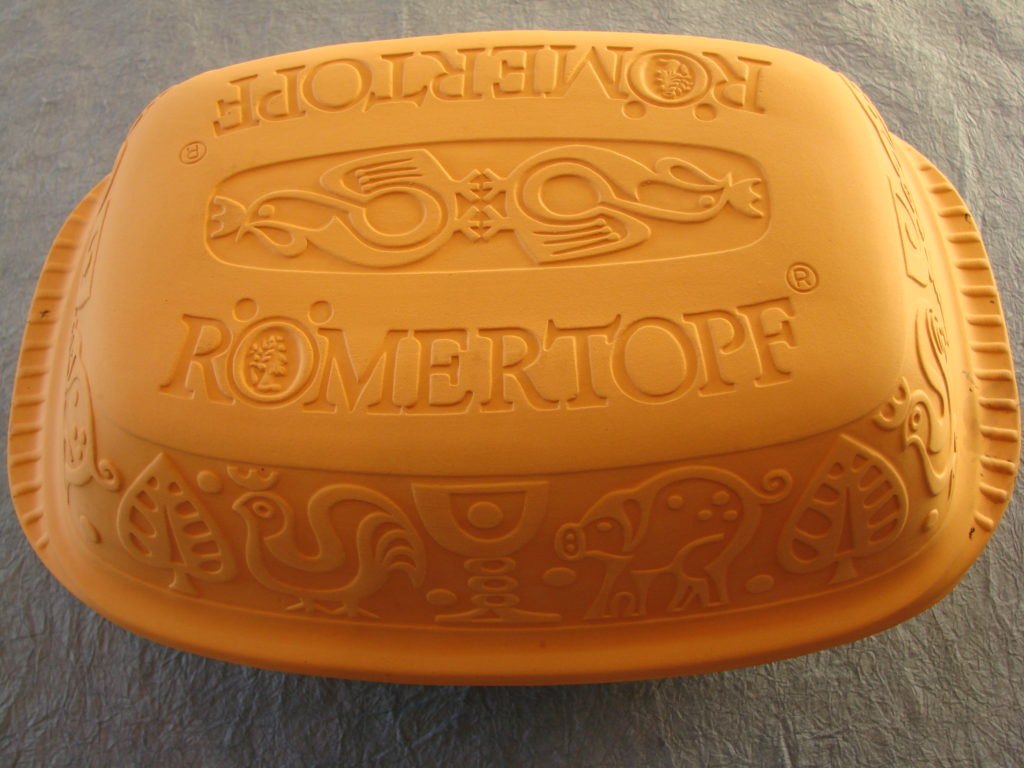 This is Karl’s Romertopf. It is brand new. Cook, Karl, cook! 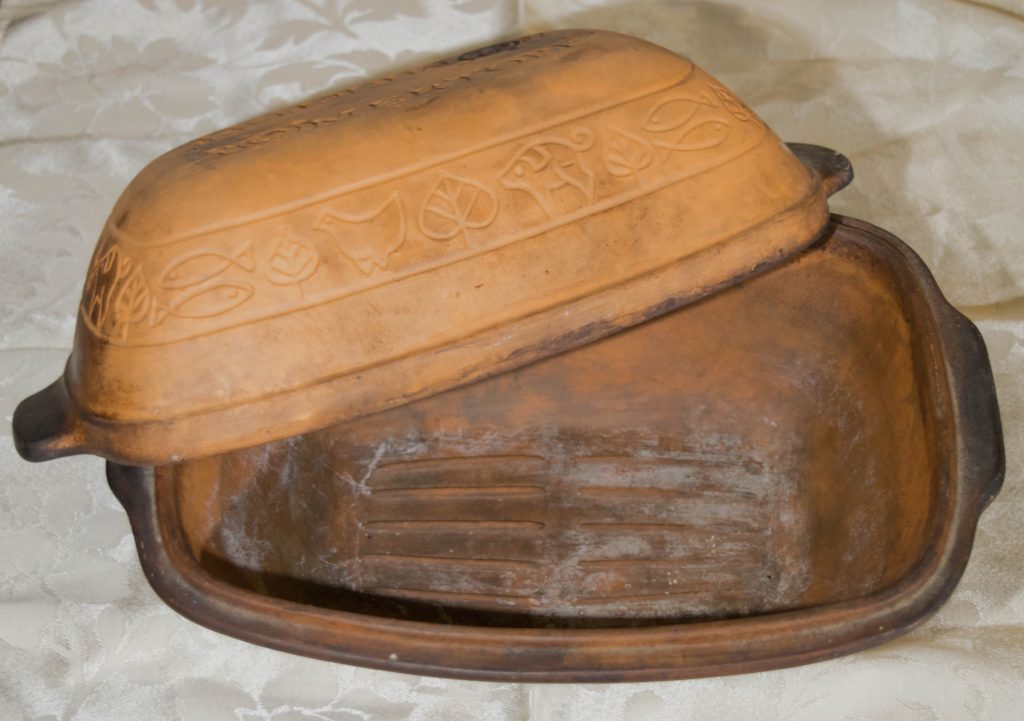 My first Romertopf was given to me by a friend when I was in grad school. It arrived in much the same condition that mine is now.  It is made from earthen ware, much the same as a run-of-the-mill flower pot. You soak it in water for 30 minutes before putting it in a cold oven and turning the oven up to a very high cooking temperature – 450 degrees or so. It then allows the food inside to bake and steam at the same time. The effect is rather like a pressure cooker, in that it speeds cooking times and imparts flavors throughout the food contained within.

I gave Karl his when we were talking about baking bread. I did not tell him what I was doing, only that I was sending him a gift that would dramatically change his life. Now, I was probably over-promising and under-delivering, but I will leave it up to him to fill you in on the impact of the Romertopf on his bread making. 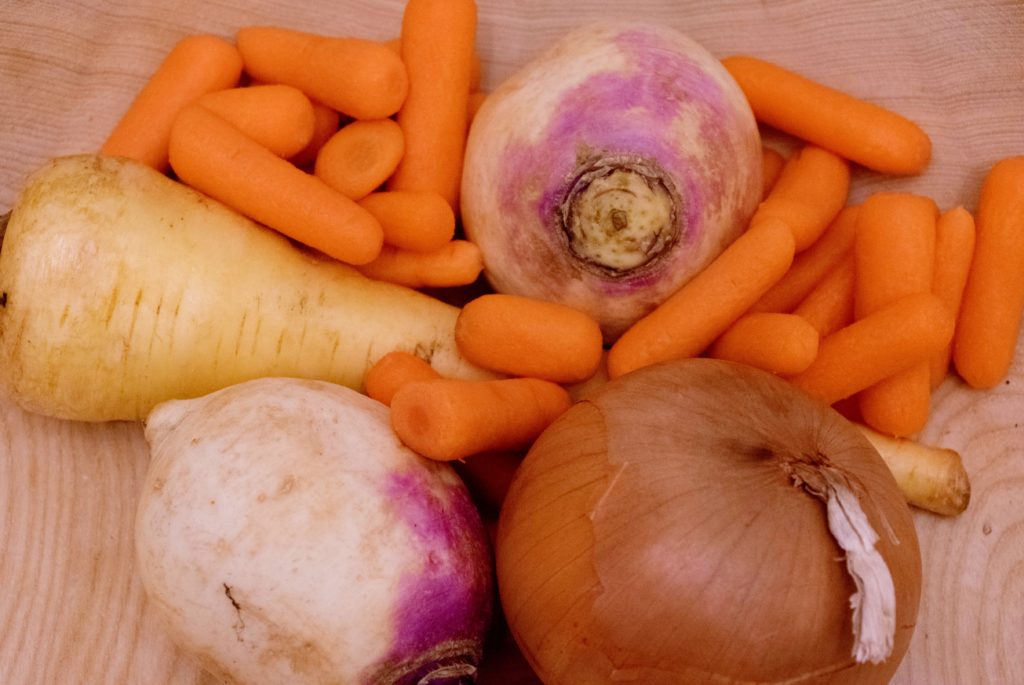 In a recent blog article, I confessed that I rarely stick to a recipe. This week there was no recipe. I had some pork and a whole bunch of fall-type root vegetables on hand. I also had a hankering for a dish that my mother used to make – pork and prunes. Originally, it was a recipe for Rabbit and Prunes, which was sensational, but once we moved back close to London, the only rabbit we saw was my sister’s pet named Cyril. 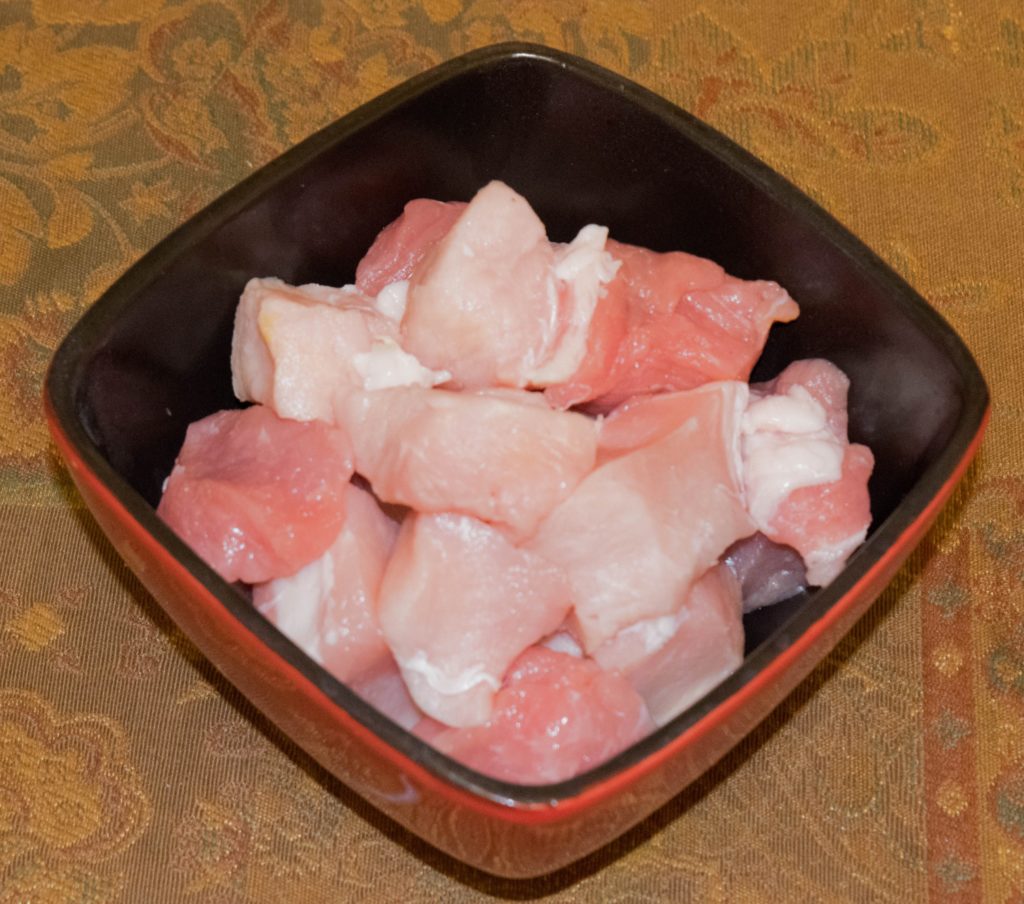 This is Country-Style Pork Ribs. Cheap as dirt and much tastier.

And these… well, if you don’t know what these are, then you are young, healthy and have an excellent digestive system. The rest of us are more familiar with prunes! 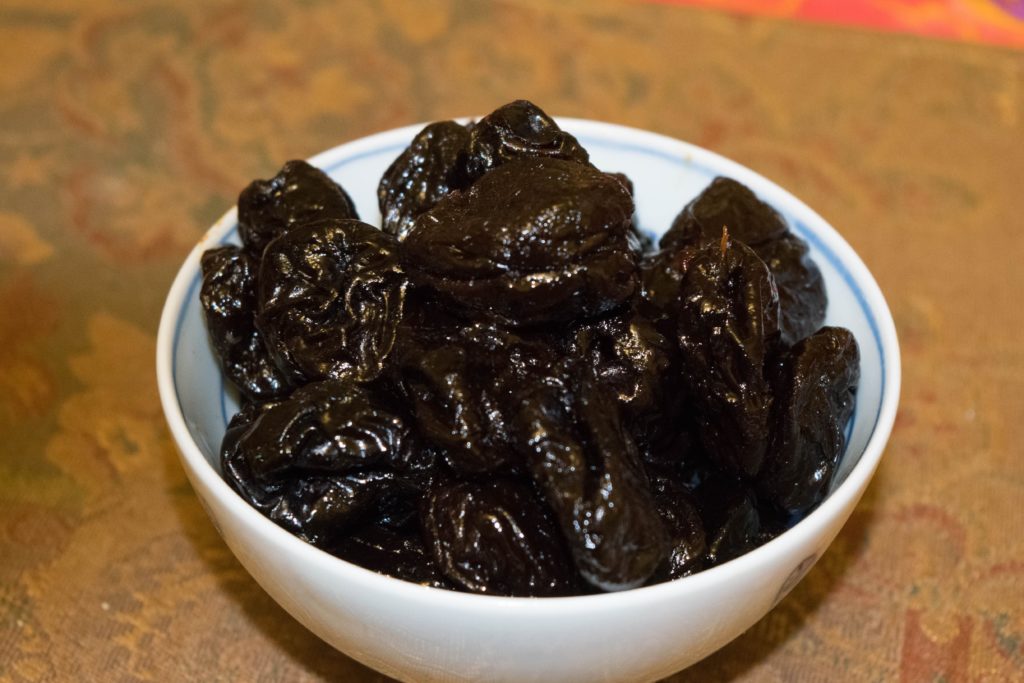 Since the Romertopf is another form of one pot cooking, it lends itself nicely to fall and winter fare. Additionally, since it cooks at a higher oven-temperature than normal, you would have to be crazy to use it during warm weather! I remembered prunes and red wine and veggies. So, I browned the pork (to keep a firm texture)… 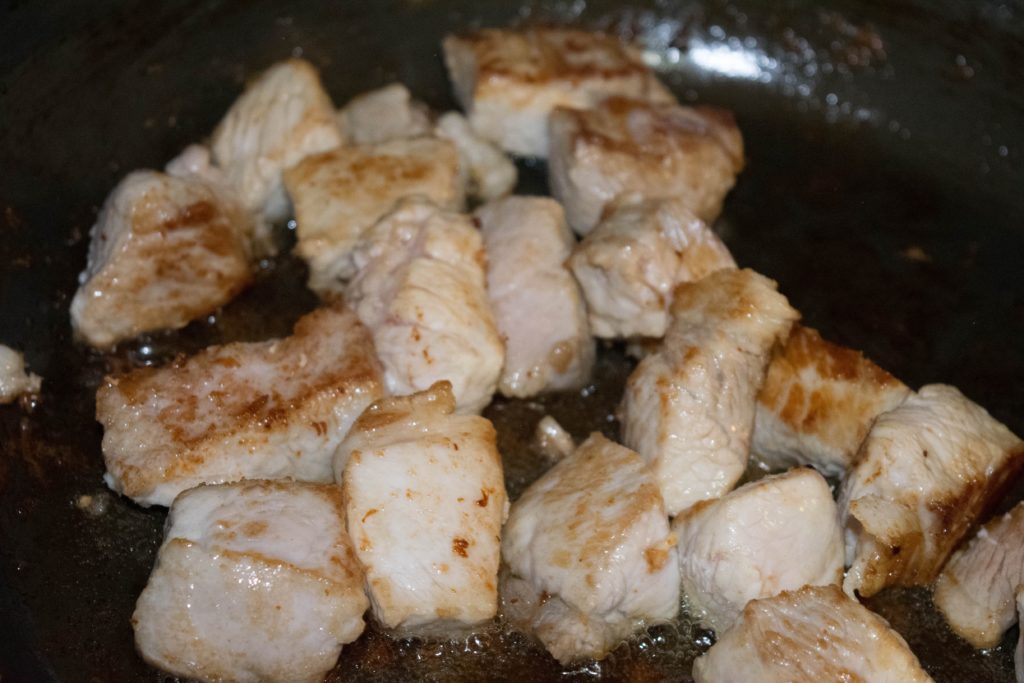 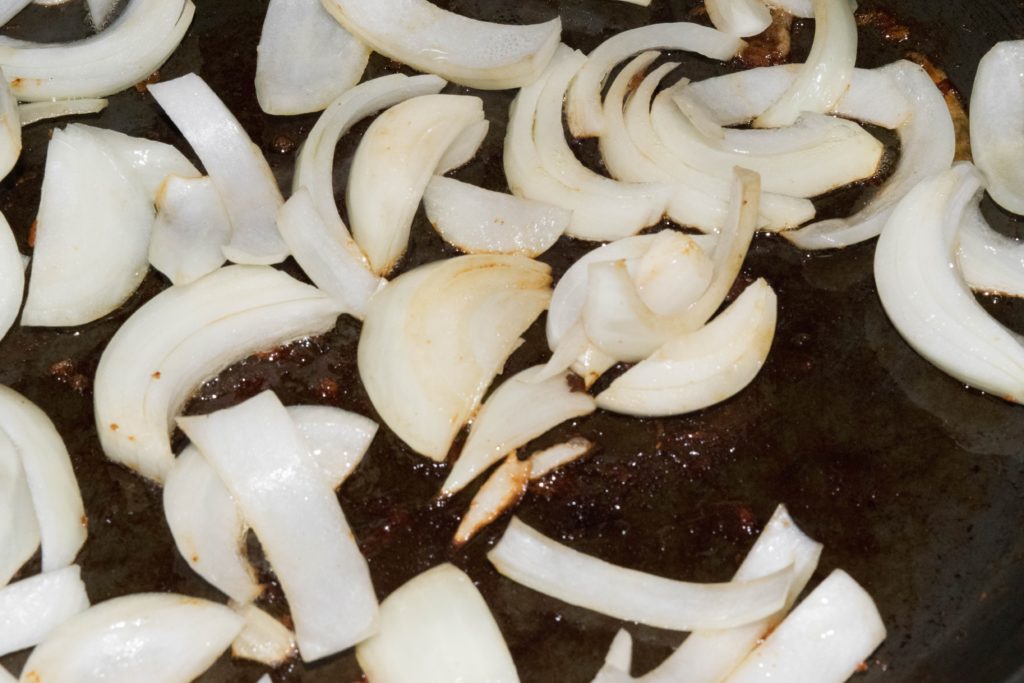 Threw in the root vegetables… 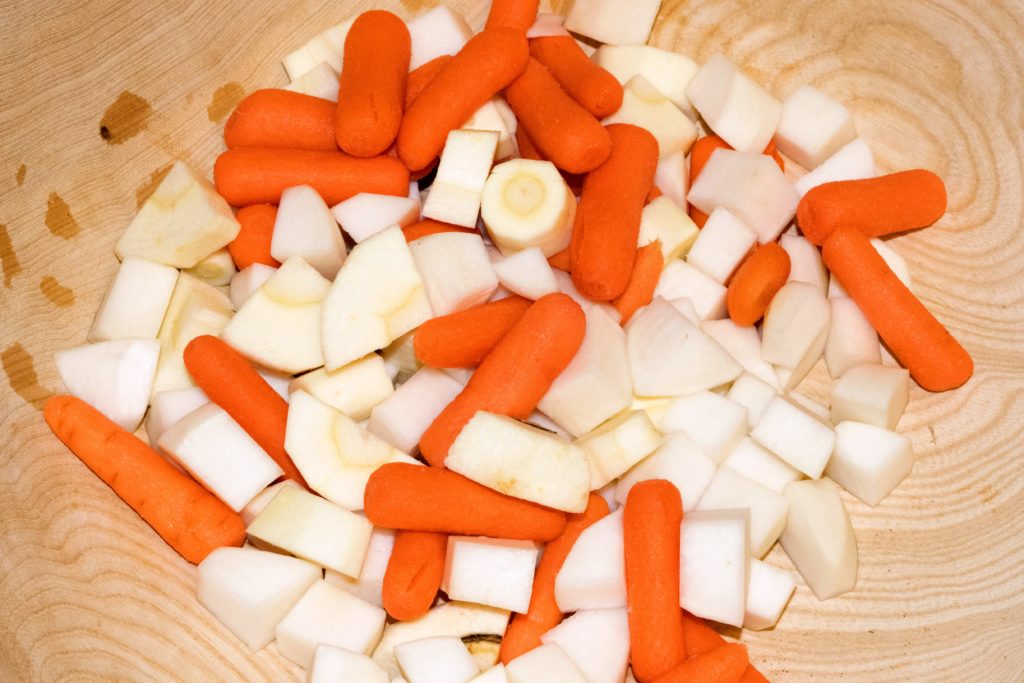 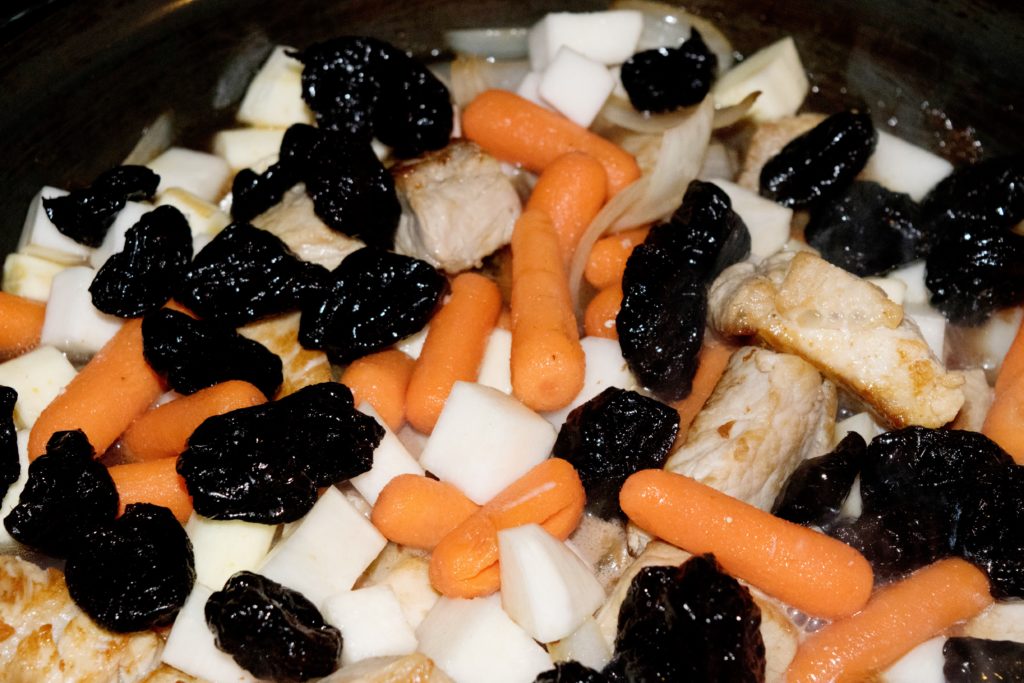 Mixed it up and put it in the Romertopf that had been soaking for 30 minutes in cold water. 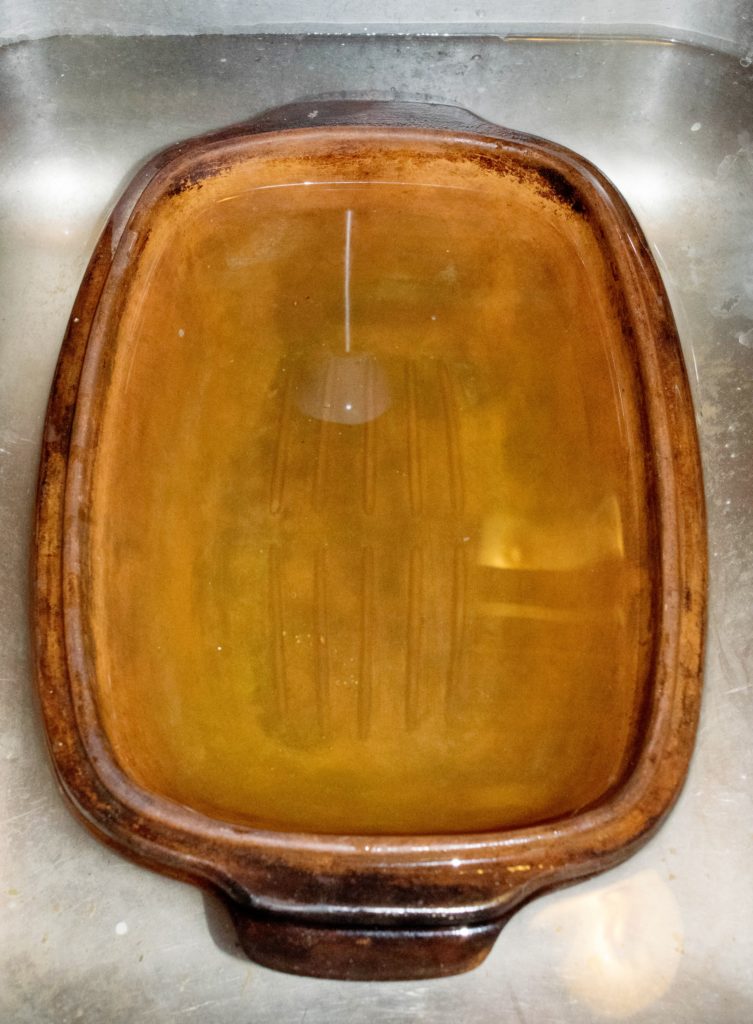 Instead of red wine, I used cranberry juice and vegetable stock. 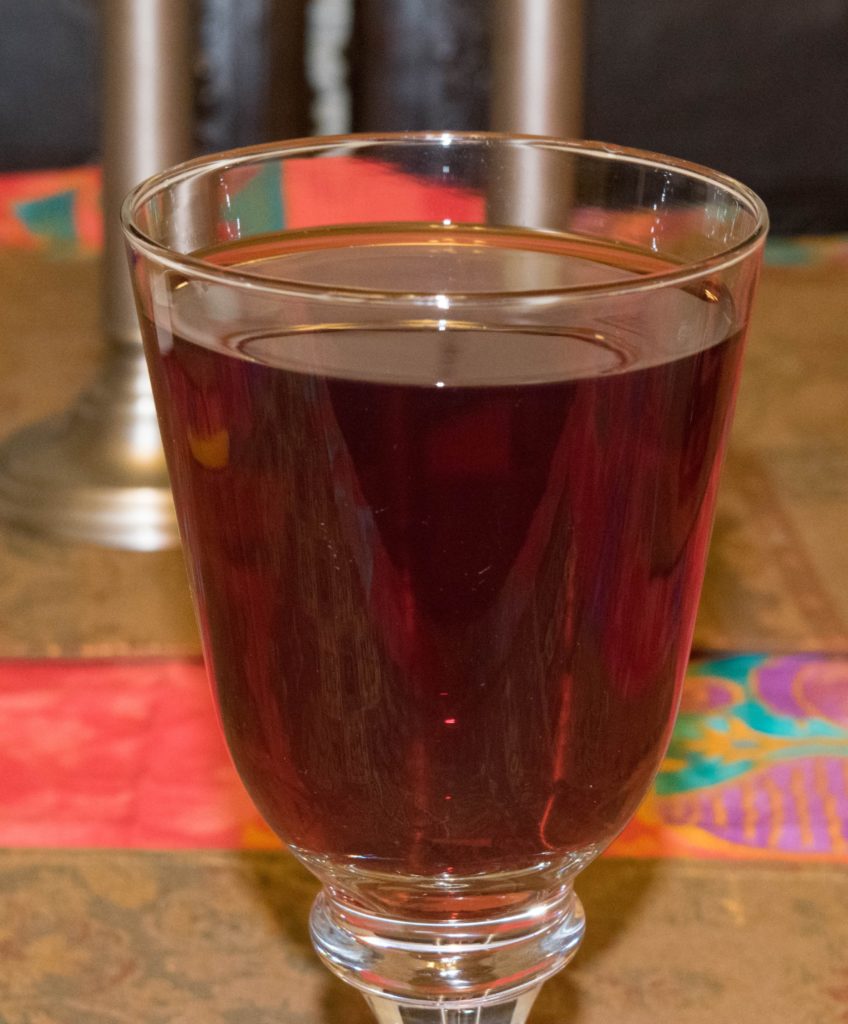 Most similar recipes call for red wine and sugar. With the sweetness of the prunes and the flavor of the cranberry juice, there really is not need for additional sugar. Who needs it?

The Romertopf is then covered with its lid (which has also been soaking in cold water), placed in a cold oven and the oven temperature set for 475 degrees for anywhere between 75 and 120 minutes.  I would recommend 90 minutes, but there is a large window  here, as with any stew. Nota Bene: It is important to use a cold oven as placing the cold, wet earthenware Romertopf into a hot oven could cause it to crack. Romertopf recipe books tell you to place it low in the oven to ensure even circulation of the hot air.

What comes out are delicious, melded flavors – excellent on your table that night, even better the next day. I tend to shy away from flour/starch based thickeners. I eat my stew on the soupy side. If you like your gravy to be thick, add buerre mane, cornstarch or arrowroot. I will blog about thickeners in the future. Feel free to nag me if it doesn’t appear soon enough for your needs! 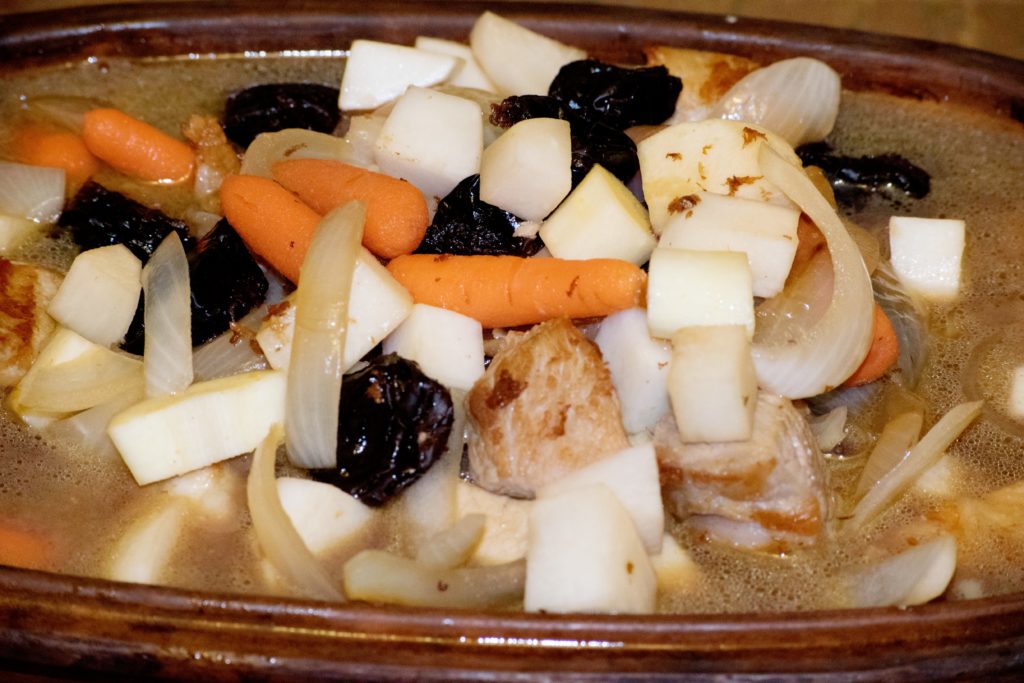