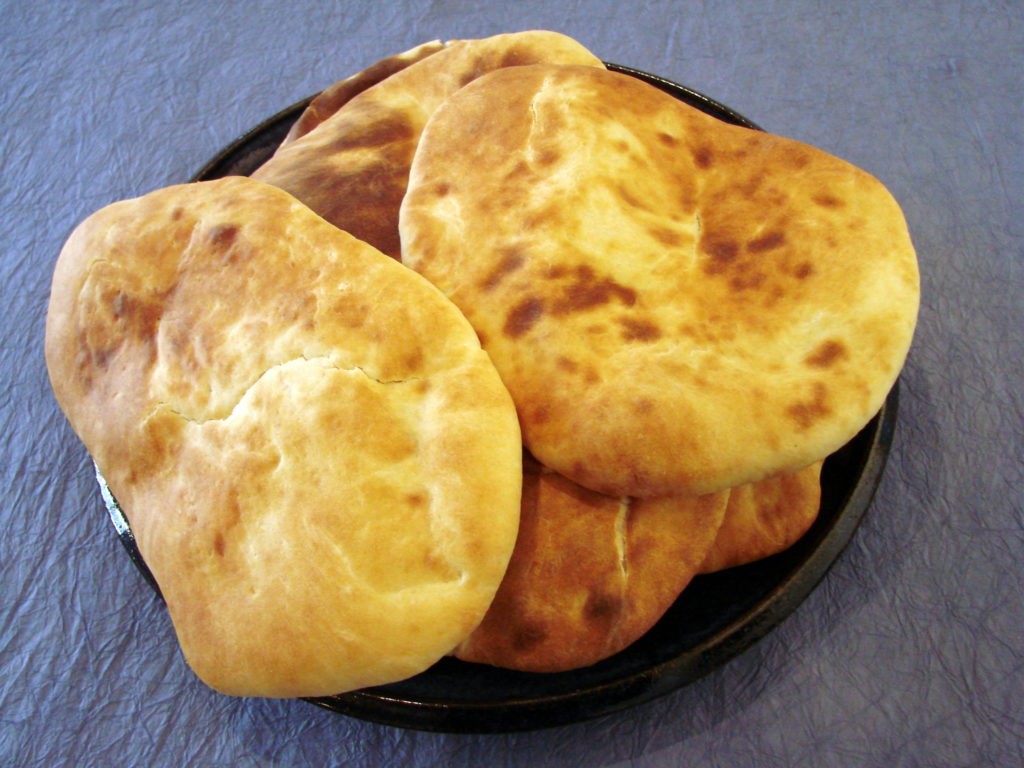 Naan is one of the delicious breads that is ubiquitous on Indian restaurant menus. There’s a reason for this: it is filling and the perfect accompaniment to Indian curries and such, whose delicious sauces should be mopped up from your plate. What better tool to use than naan?

Naan is traditionally cooked on the nearly vertical wall on the inside of a Tandoori oven, which can get to upward of 900 degrees. Being slapped against a nearly vertical surface gives the naan its characteristic tear-drop shape, as a result of the dough sagging before it becomes fully cooked.

Unless you are lucky enough to have a tandoori oven in an outside kitchen, you’ll have to resort to cooking it in an oven set to its highest temperature. It’s actually pretty easy to do, as you’ll find out if you try to make it.

There are many things you could add to naan, such as onion, garlic, topped with coriander when done cooking, Indian-spiced potatoes or ground meat. There are too many variations to list here, but a little poking around online will give you some ideas. 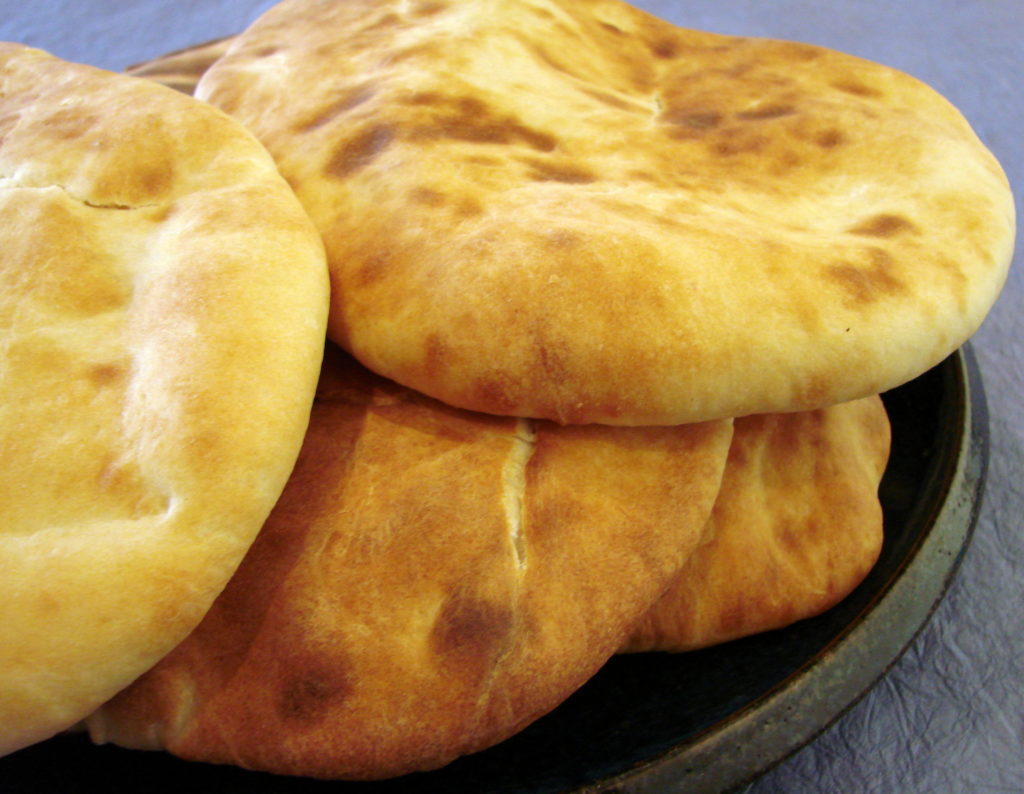 You’ll be so glad you made these!

Put the hot milk in a bowl and add 1t of the sugar and the yeast. Stir and set aside for about 20 minutes, or until the yeast is dissolved and the mixture becomes a little foamy.

Sift the flour, salt and baking powder into a large bowl, then add the remaining sugar, the yeast mixture, 2T oil, the yogurt and the egg. Thoroughly mix this to eventually make a ball of dough.

Put the dough-ball onto your work surface and knead it for about 10 minutes until it becomes smooth. Pour 1/4t of oil into a large bowl and coat the outside of the dough with it. Cover with plastic-wrap and let the dough rise in a warm part of your kitchen for an hour.

Preheat to its hottest temperature and put the cast iron skillet in the oven that has now been set to broil.

Punch down the dough and knead it for a bit before dividing it into 6 equal pieces. Keep each of them covered until you’re ready to cook them, one by one. Roll the ball into a tear-shaped naan that’s about 5 x 10 inches or so. Ensure that it’s not too thick

Here’s the part that you must do uninterrupted for each piece—and be very careful, because there are so many chances of getting burned. Remove the skillet from the oven and slap the naan into it. (Don’t fret if it’s not centered, you’ll have 5 more attempts.) Place the skillet in the oven for 3 minutes, during which it will get a little puffy. Next, move the pan to under the broiler (3-4 inches from heat) for 30 seconds, until the naan gets slightly browned. Remove and place on cooling rack if not eating right away. Brush the warmed naan with a little butter right before serving.

Cooled naan can be frozen for another dinner. Just reheat in the microwave or covered with a slightly damp dishtowel in the oven. 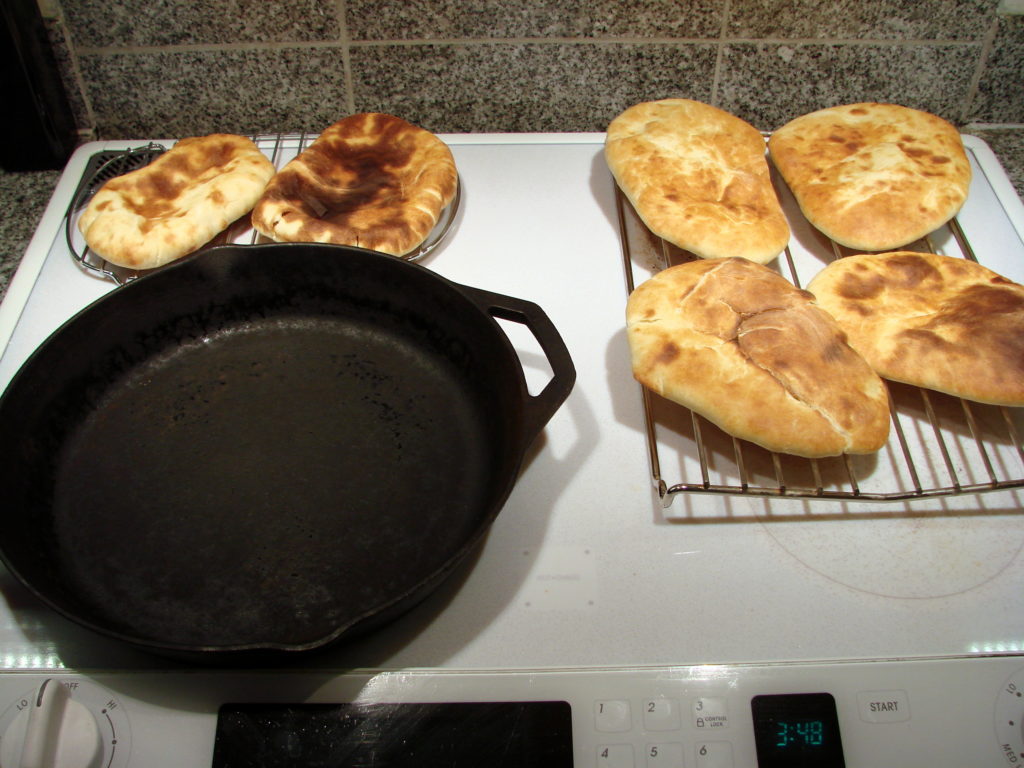 If you do freeze it for later, ensure that it’s completely cooled.