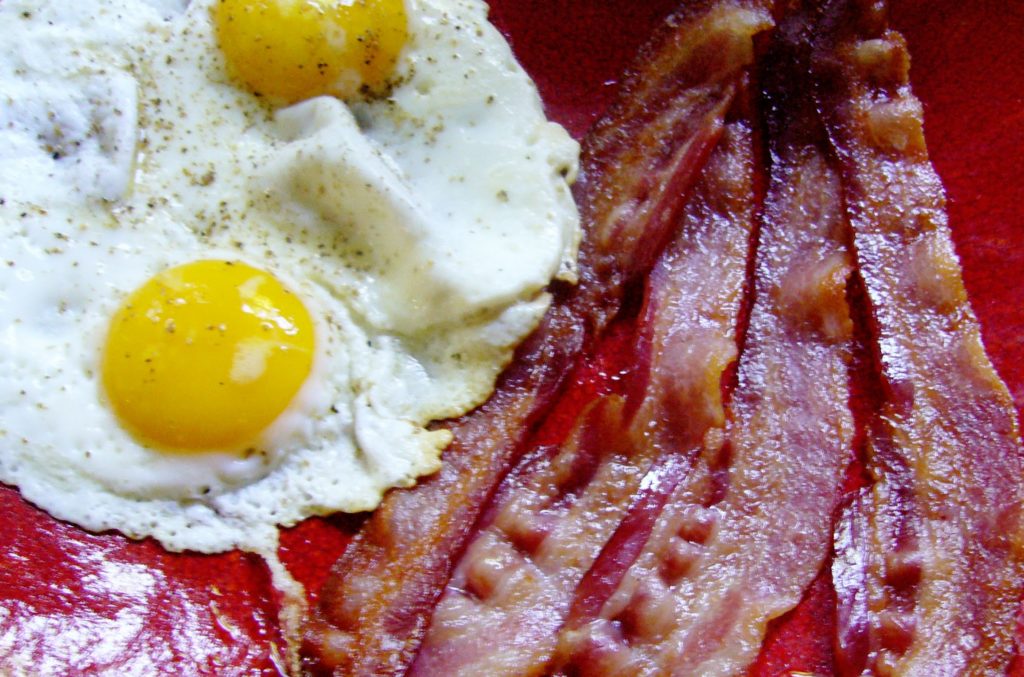 Sunday breakfast was always a special meal. It was special because it invariably included bacon and you don’t get much more special than bacon! Back in the sixties (you do the math on my age!) in England, fruit juice was far less bountiful than it was in the United States. It came in a can and was measured out in small portions.

From time to time we would have american-style pancakes if we were luckey enough to find maple syrup in the shops. My father was a US Airforce G.I. who had met his English rose and decided to settle in the outskirts of London. He still had friends on base who would smuggle him goodies from the PX. Maple syrup was a big deal in our house – along with Cheerios, Root-Beer Barrels and Oreos.

I have tried to keeo up the tradition of Sunday breakfast, even as a single man. It marks the day as different and is part of what establishes the rhythm of my week. However, I recently overhauled my diet. It happens when you turn 50 and realize that, not only are you mortal, but the time you have left is severly limited and not to be thrown away.

I have long believed that many of the illnesses that we experience in the United States and Western Europe have to do with the amount of processed foods that we consume. More especially, we are encountering increasing numbers of allergies, both generally and specifically. The rise of gluten-intolerance is not only because we now understand the issues surrounding Sprue Celiac Disease, a condition that “creates inflammation in the small intestine, and damage in the lining. This prevents important components of food from being absorbed. The damage to the lining of the intestine comes from a reaction to eating gluten, which is found in wheat, rye, barley, and possibly oats, and in food made from these ingredients.” (Medicine Plus), but because of the way in which we have tinkered with the farming process that produces the food we ingest. This is compounded by the chemistry used in production which is intended to produce consistency and preserve products longer. The effect has been disastrous on our bodies. 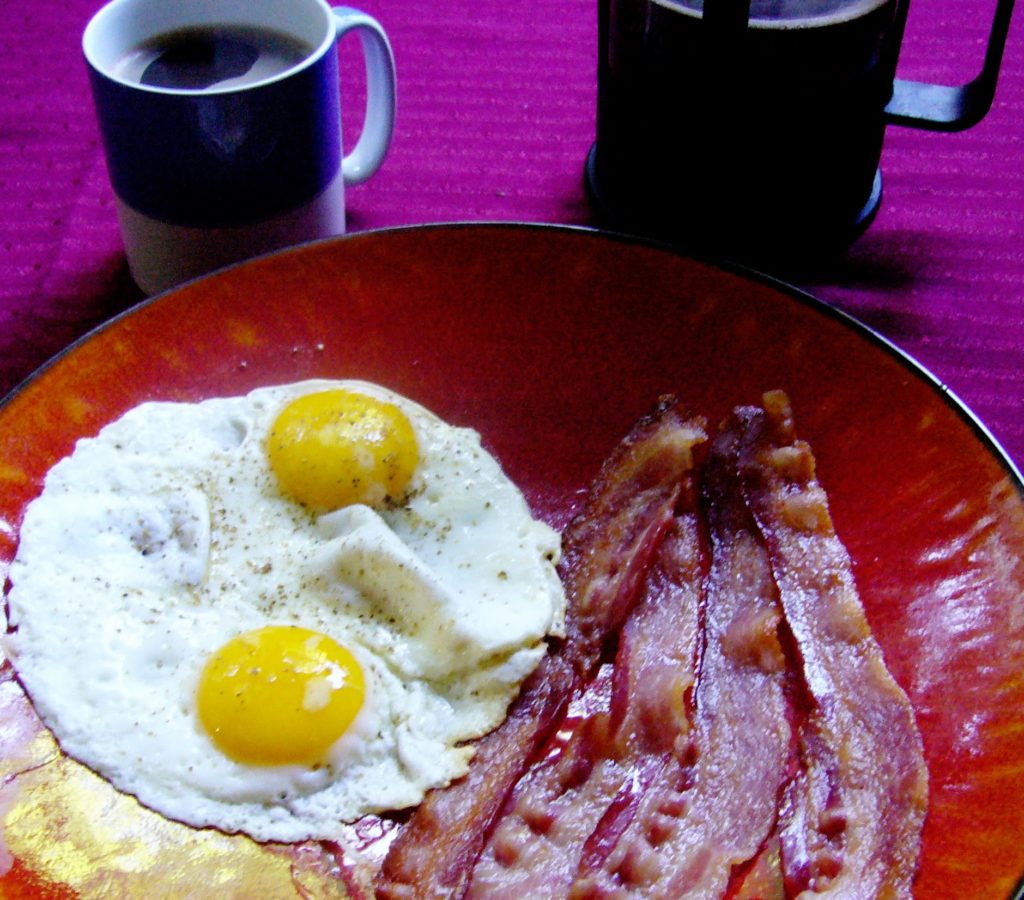 So, I have turned to whole foods, given up anything that has sugar and try to avoid processed foods. “Oh, you are going Paleo?”, I am often asked. The answer is complicated, but, despite the fact that a Paleo diet comes close to what I am doing, it is a resounding “No.”

I don’t miss very much of my old life. I was recently at a semi-pro soccer game with a friend, when the smell of barbecued bratwurst came floating through the stands. It was delicious and I must have resembled a cat being teased with a laser-pointer. I really wanted to look at it. If I couldn’t eat it, surely I could enjoy looking at it!

The point here is, not that I will never eat German sausage ever again, but that, if I do, it is likely to be in Lancaster County PA, where is has been hand-made by local Amish. If I go around to the back of the barn and find a discarded cardboard box from where they bought them frozen from Hormel, I am going to be very sad.

And that brings us to today’s breakfast.

My cousin, Daniel (my dad’s sister’s boy) visited me this week and brought with him Woobie Roast coffee. His son and daughter-in-law roast their own coffee and each roast carries the name of a family pet. Woobie roast is robust, but not over-poweringly so. The flavors are all still there and the aroma alone will put a spring in your step.

English (better still, Danish) bacon is an entirely different cut. It results in a rasher that is part US-style and part Canadian. It is not cooked until the fat is rendered and what remains is a slice of crispy goodness, the way that it is in the US. Most Americans would consider English-style bacon to be under-cooked. Certainly, the fat content in European bacon is higher. There is a great deal to be said for both approaches. You can tell from the photographs that I took the middle-ground on this batch. Since I eat bacon so rarely now, you can only imaging the pleasure that this plate produced! 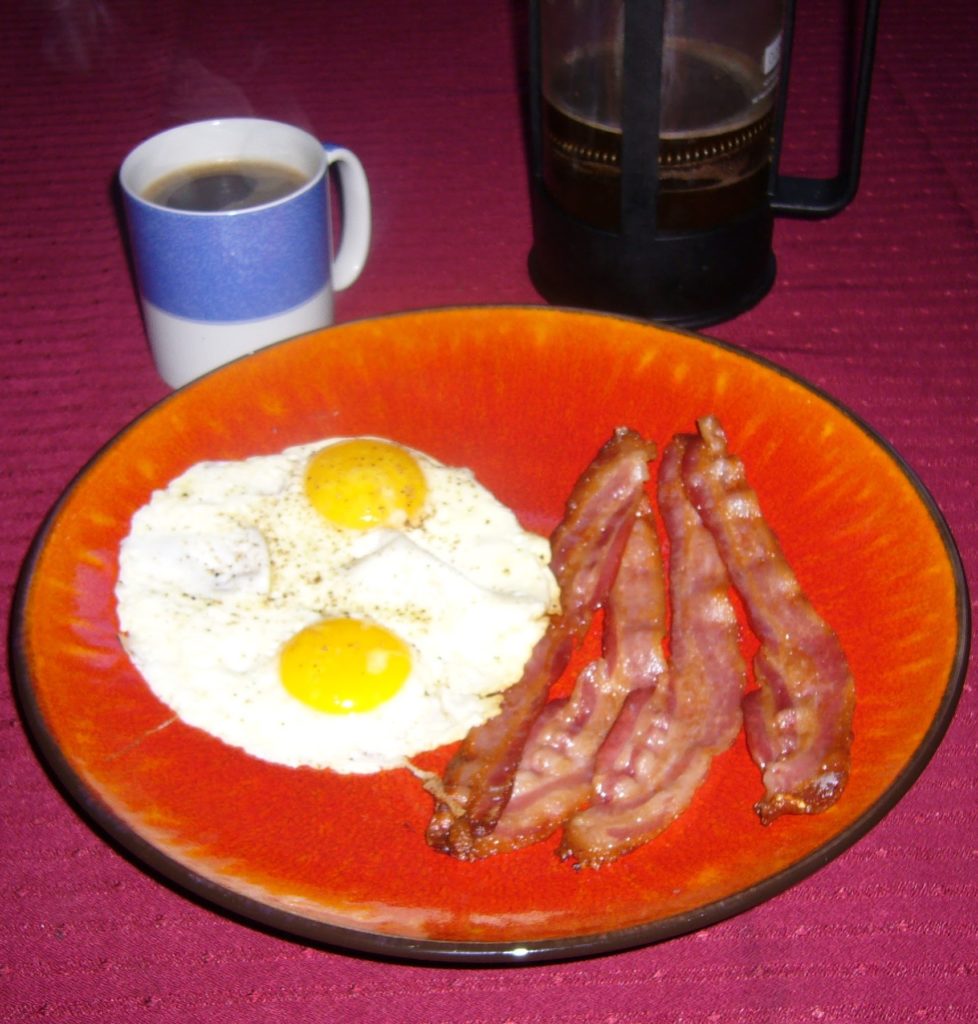 A colleague of mine keeps chickens and once I tasted a farm-fresh egg, I was spoiled for anything else. Folks, if you have never tried one, do yourself a flavor and do so. The yolks are golden-amber in color and have a flavor unlike their store-bought counterparts. You will never go back.

I have fond memories of my childhood, Sunday breakfasts. Here I should also point out that preparation of Sunday breakfast was always carried out with the sound of the weekly omnibus version of The Arches on the radio, in the background. Pure English nostalgia. I received similar pleasure from my breakfast today. Good food, that may well kill me in other ways besides unwanted chemistry, with local and family connections. I really enjoyed my Sunday morning and appreciate the family, friends and livestock that brought it to me.

[At this point, for those who have not heard this aphorism, I should point out that the chicken contributed to my meal, but the pig was committed to it!]

And what is my next step? Allow me to show you… 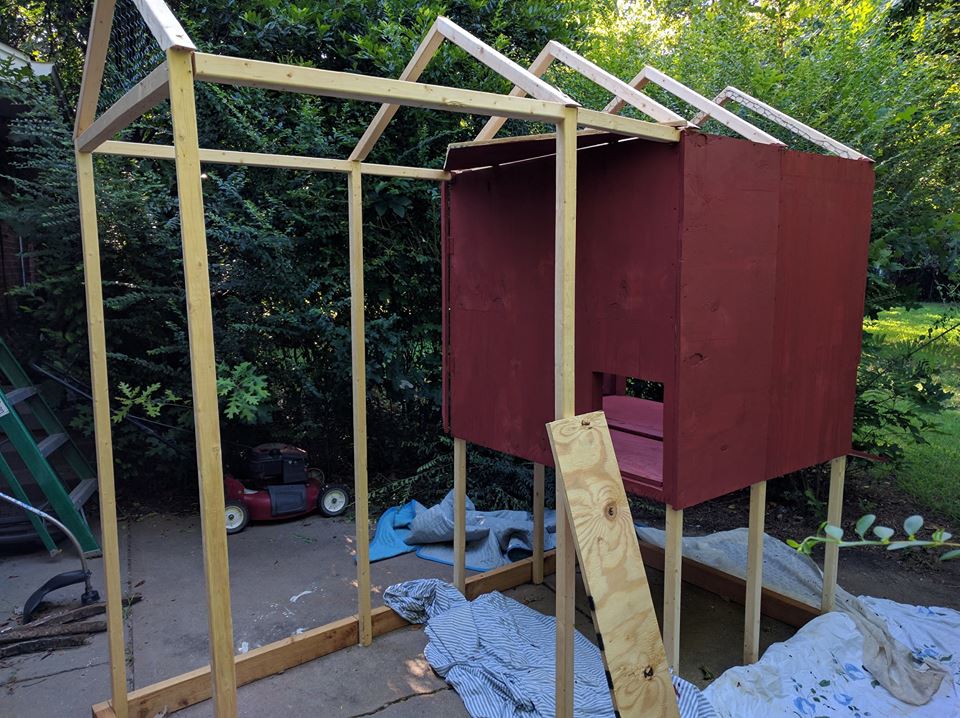