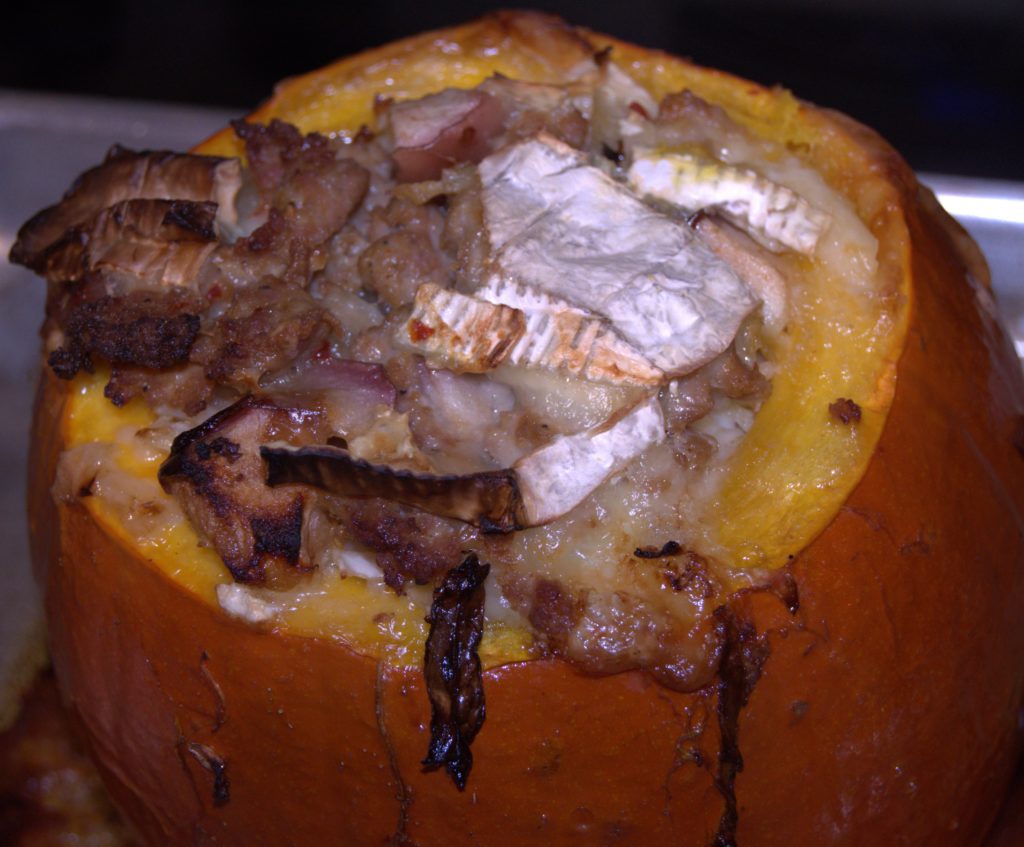 One of the things that I enjoyed about living in Japan was the way that the food changed with the seasons. I recently realized that, even though the American dream includes being able to buy any kind of food desired, no matter what the season, that does not prevent us from enjoying the spoils of fall food during the autumn and that is what I did for this post-thanksgiving meal. 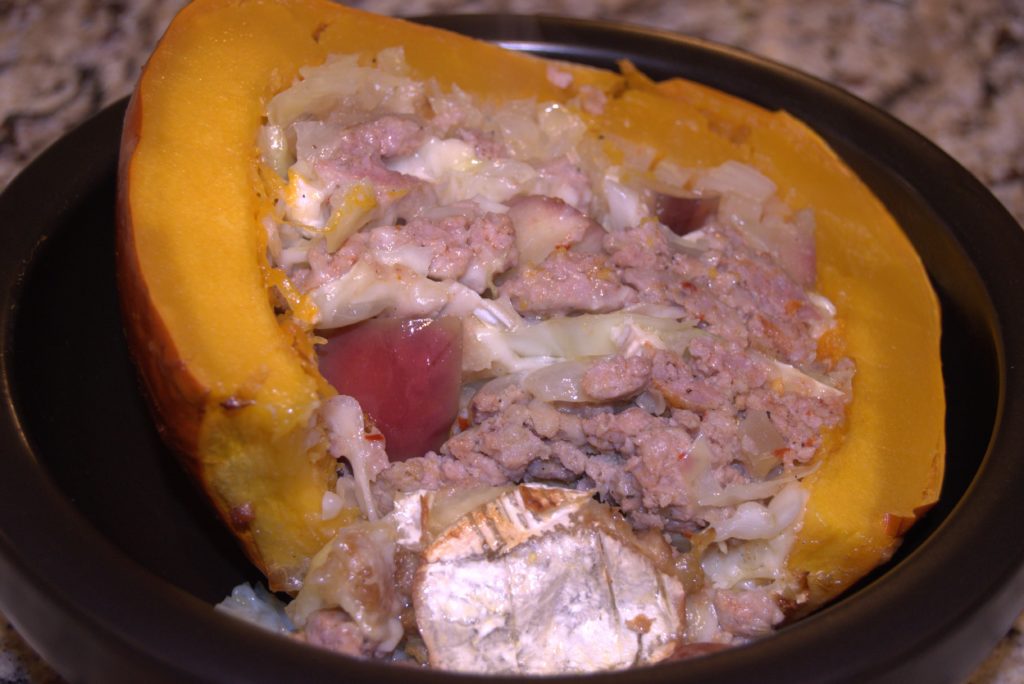 This is an unbelievably easy meal to make and is hugely impressive when served. I did this with a small pumpkin (the same that you would use for pumpkin pie) and cut it in half for two servings, but there are mini-pumpkins out there and you could make individual servings. 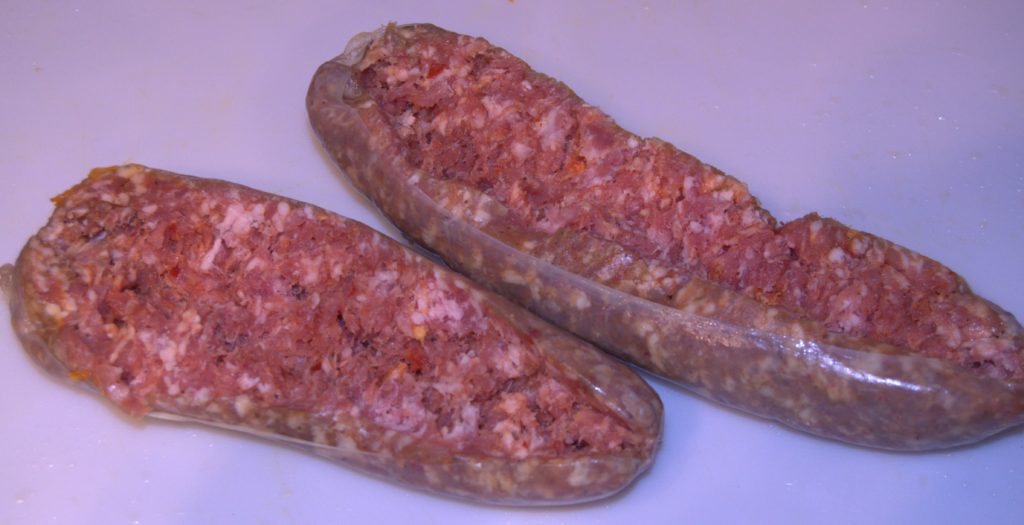 The idea for this meal began at my local health food store. They have a fabulous range of sausages – Italian, Chorizo, Parmesan and the above depicted Andouille. All are chicken or turkey and so almost guilt-free. They also had small pumpkins and the idea for stuffed pumpkin was formed. 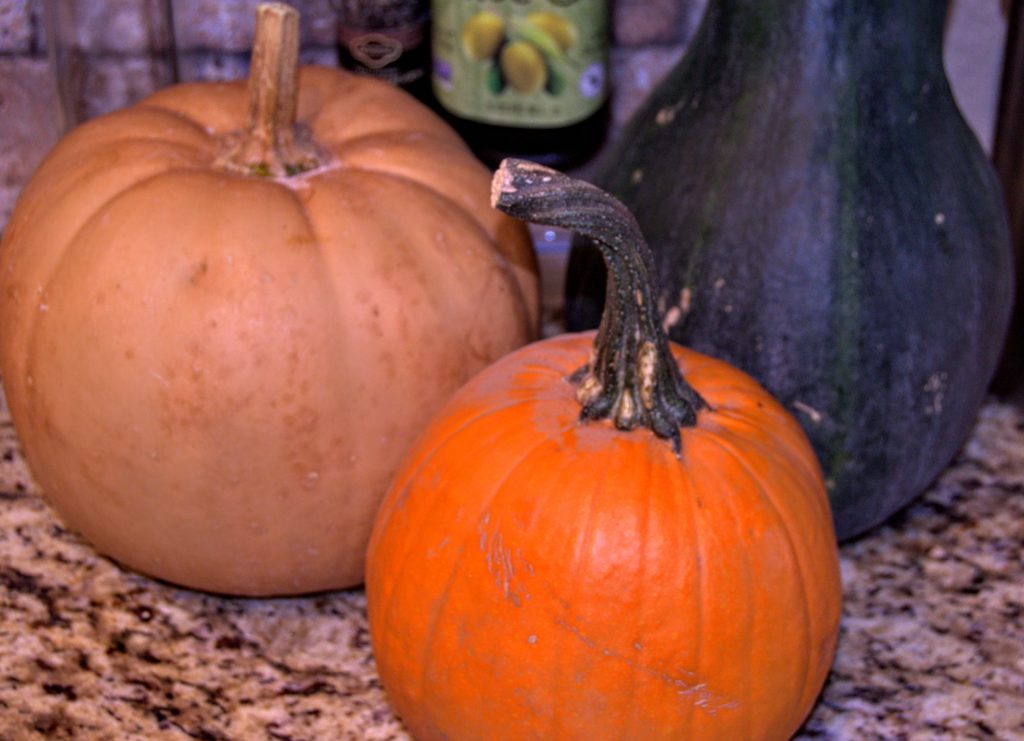 There is no recipe for this – just a method.

The ingredients list for this version is as follows, but you should feel free to modify this to your tastes. 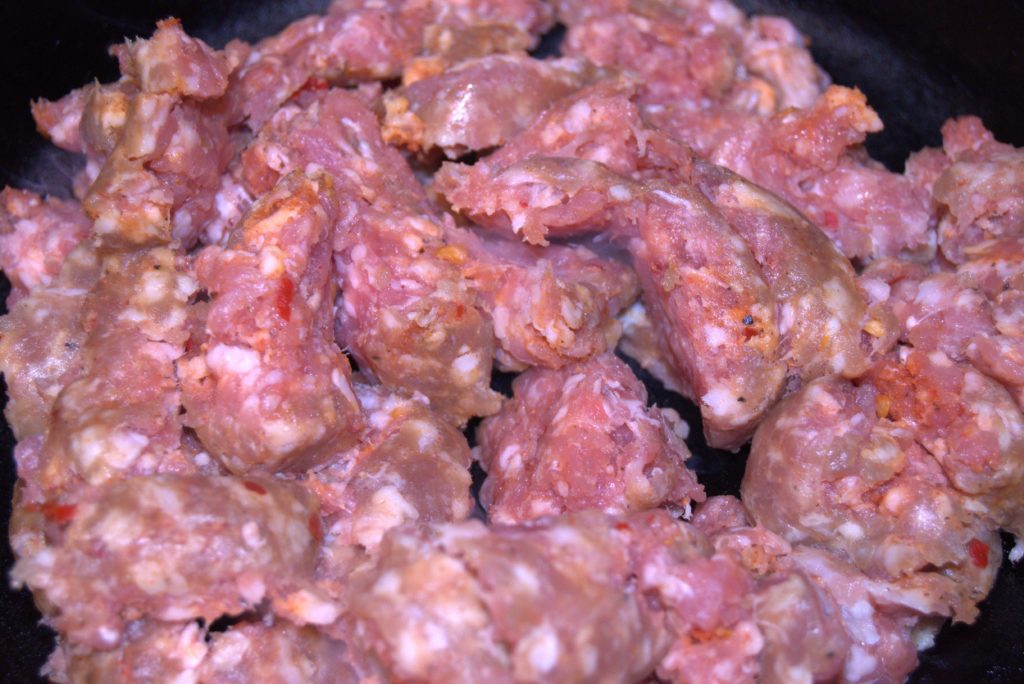 Brown the Andouille, but it will be baked inside the pumpkin, so do not fully cook. 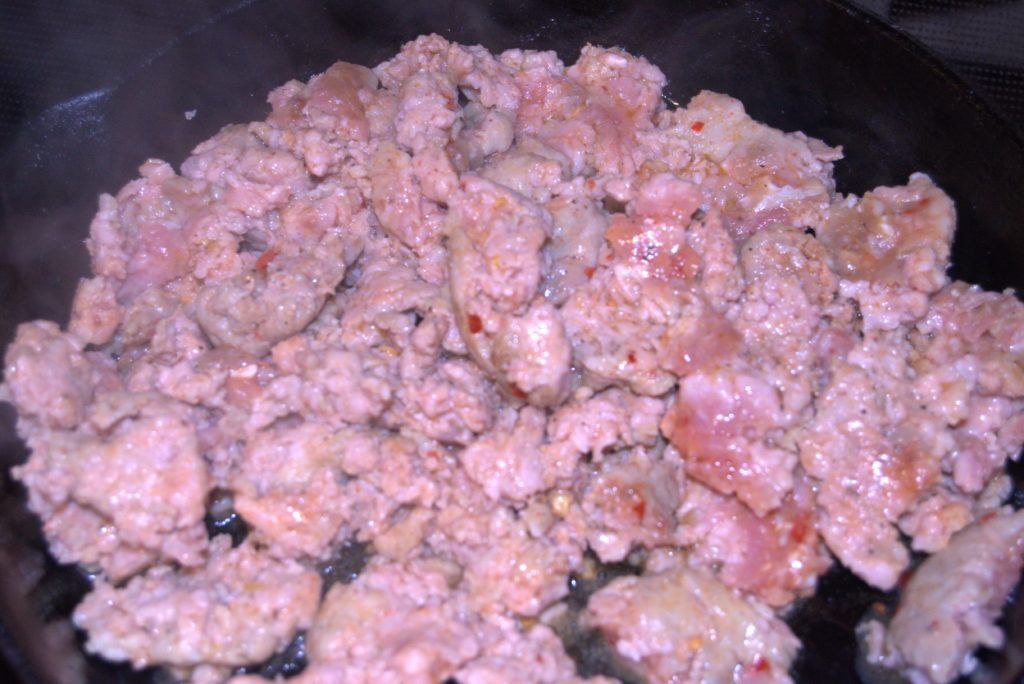 Set sausage aside in a bowl and prepare the rest of the filling. 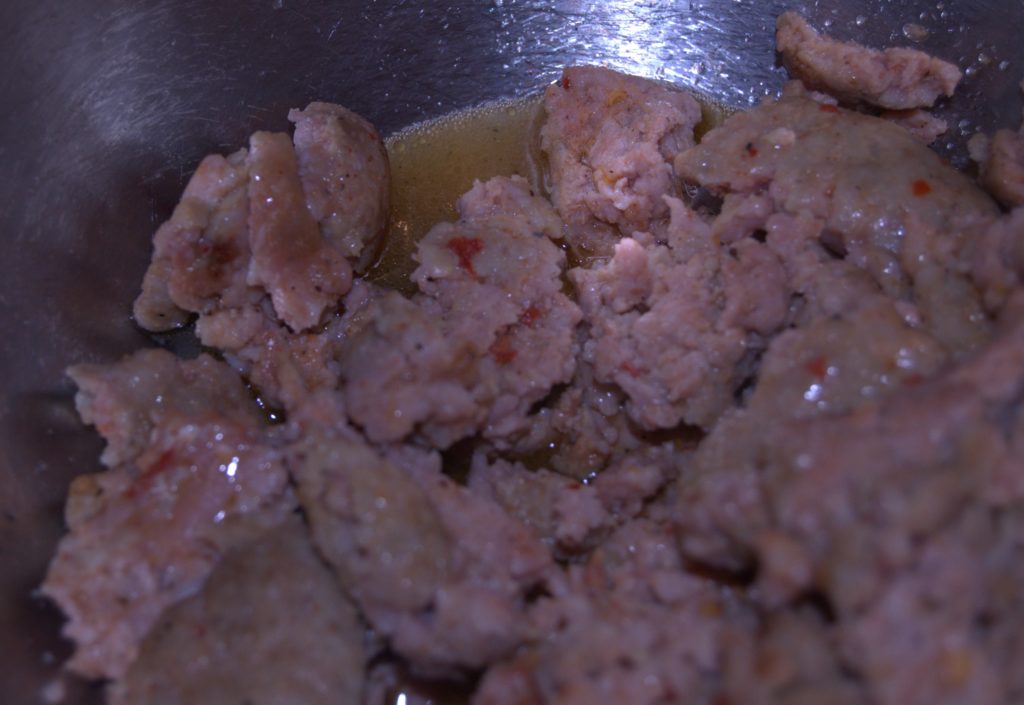 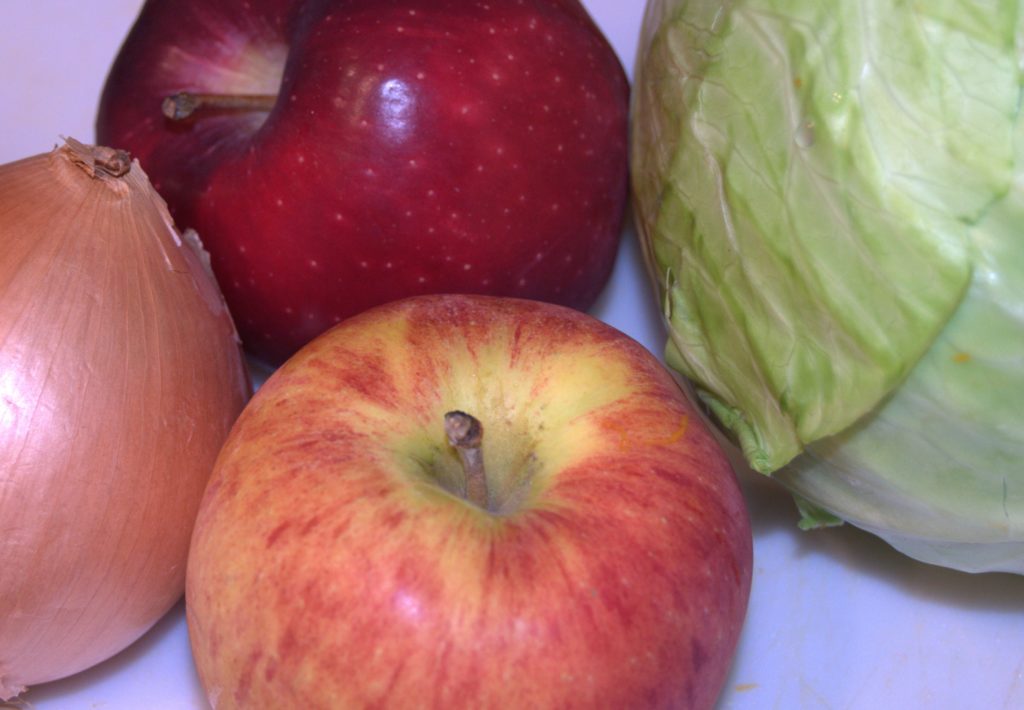 I like to soften the onion and have it slightly caramelized. 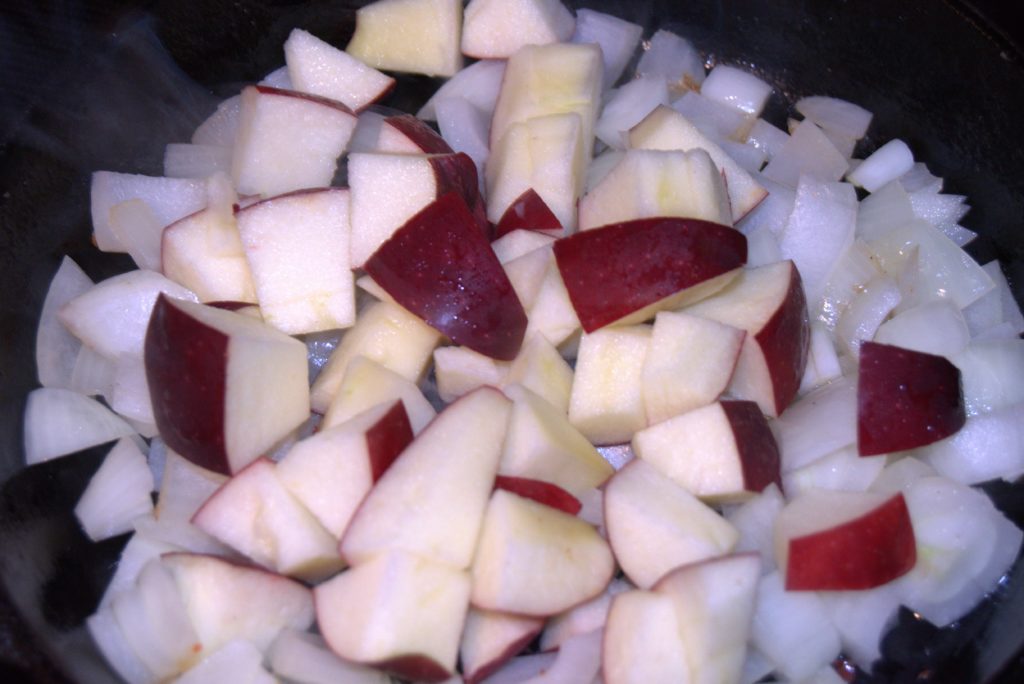 You will see that I also add the apple to the pan. This is really to heat it a little since I do not want the filling to be cold when it goes into the pumpkin. 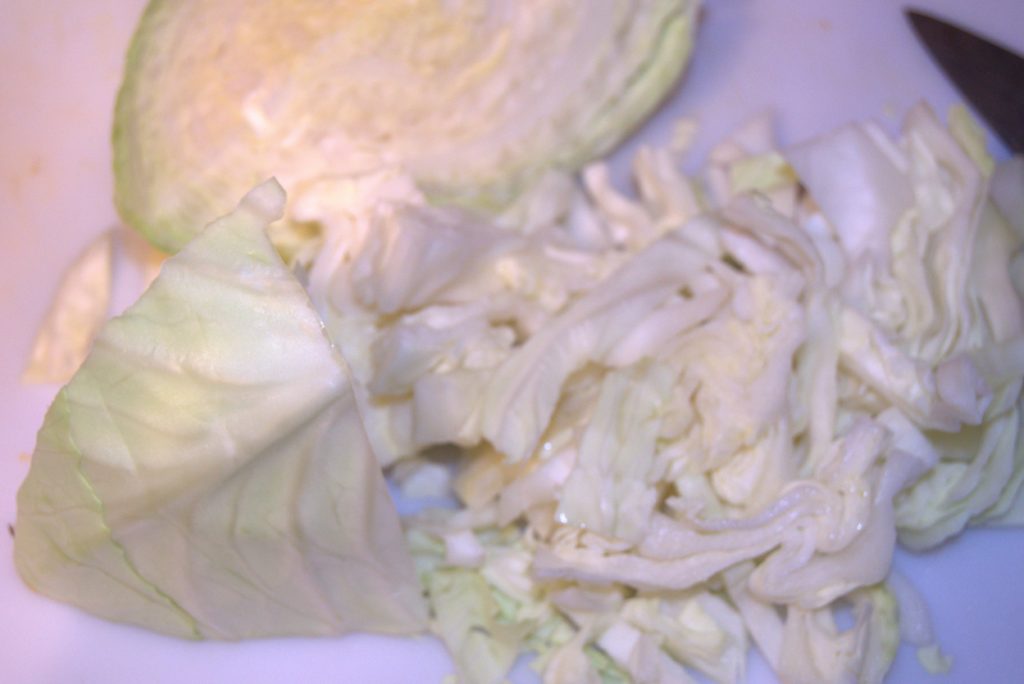 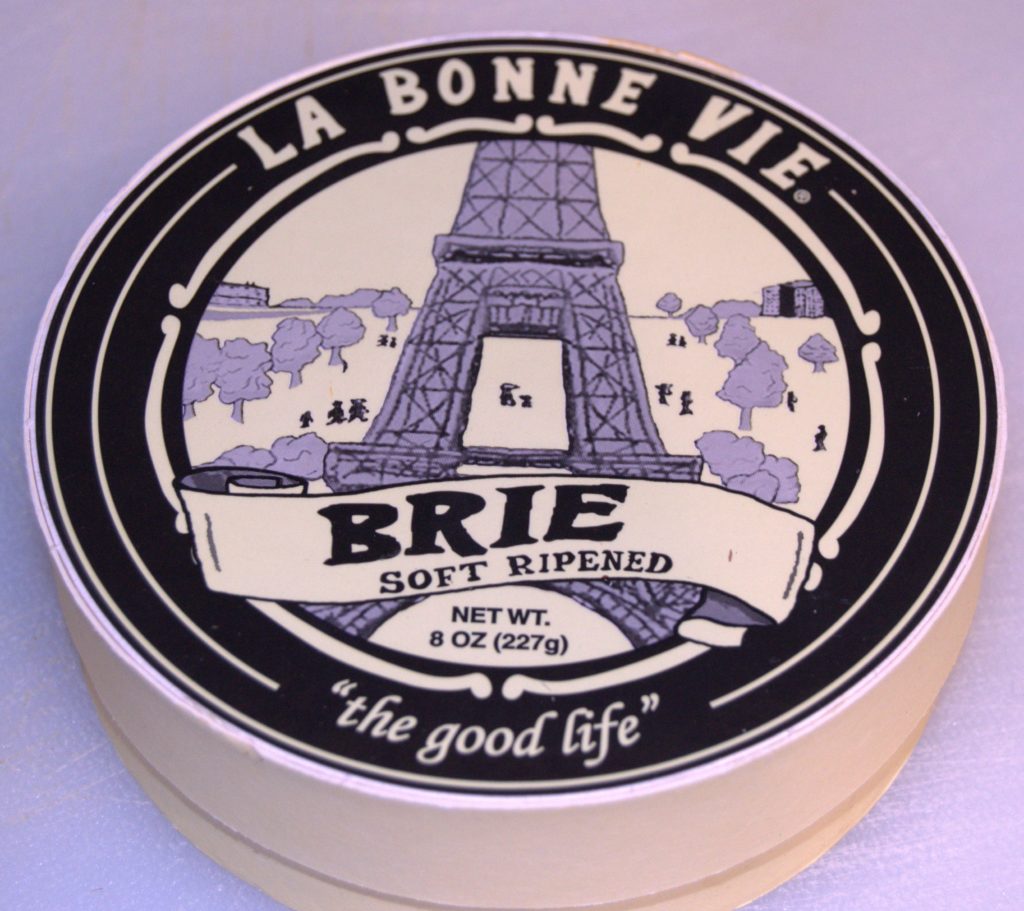 And slice the brie. 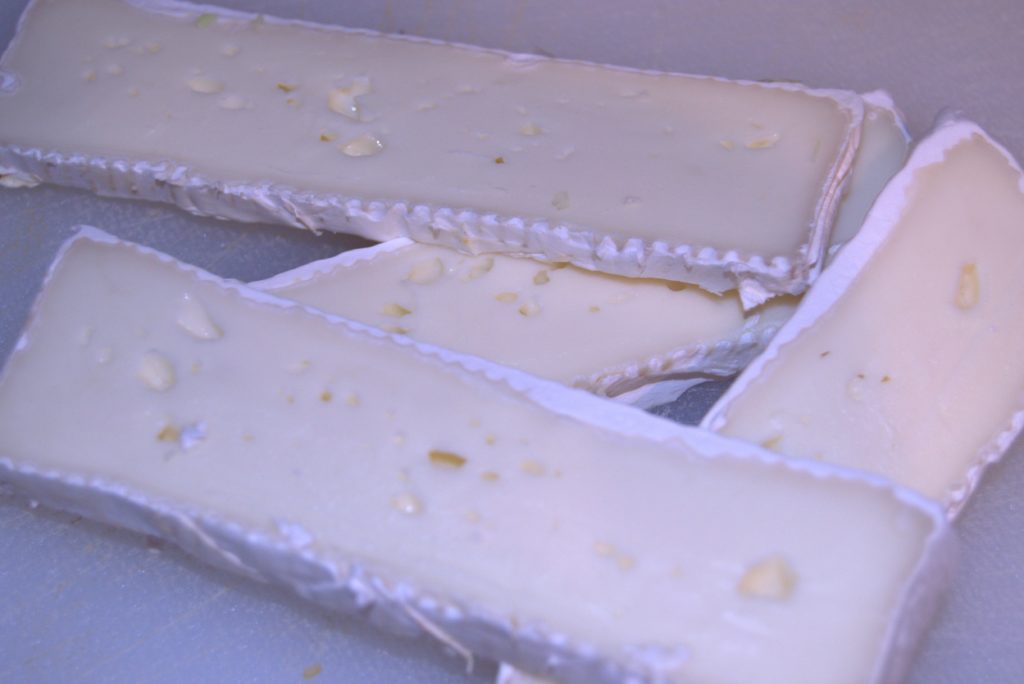 Now scoop out the seeds from the pumpkin. 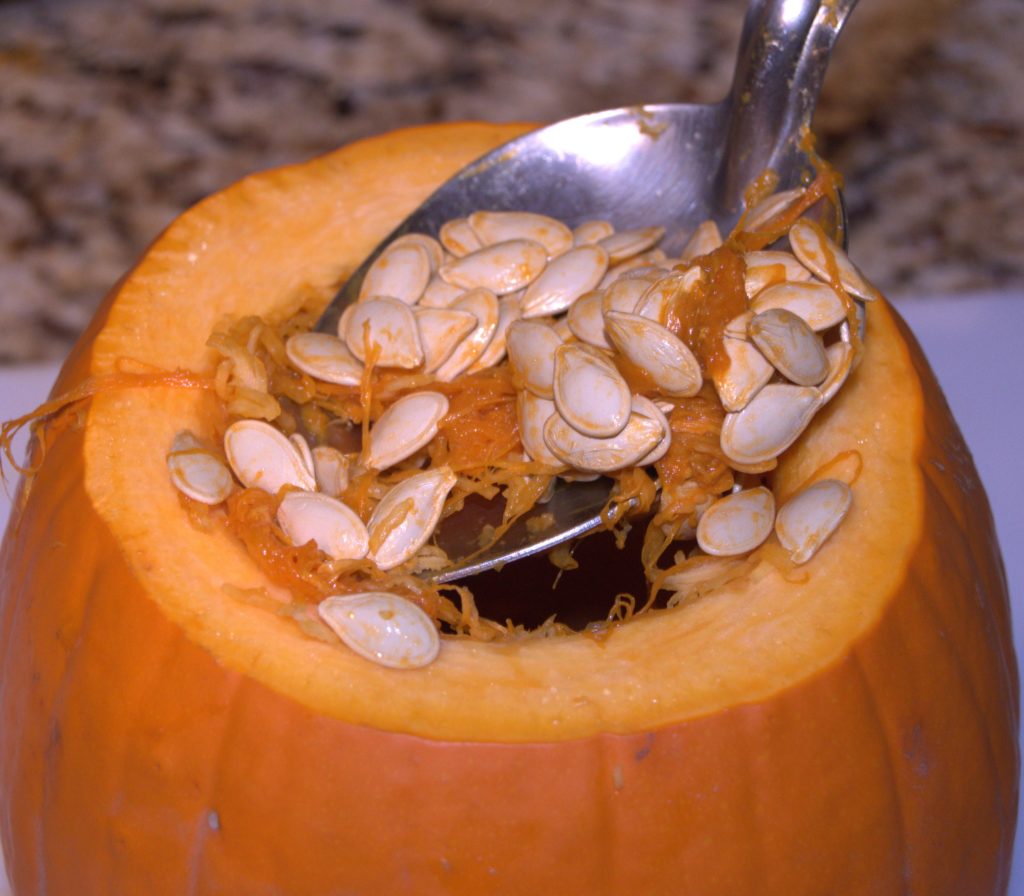 and layer the ingredients in the pumpkin. 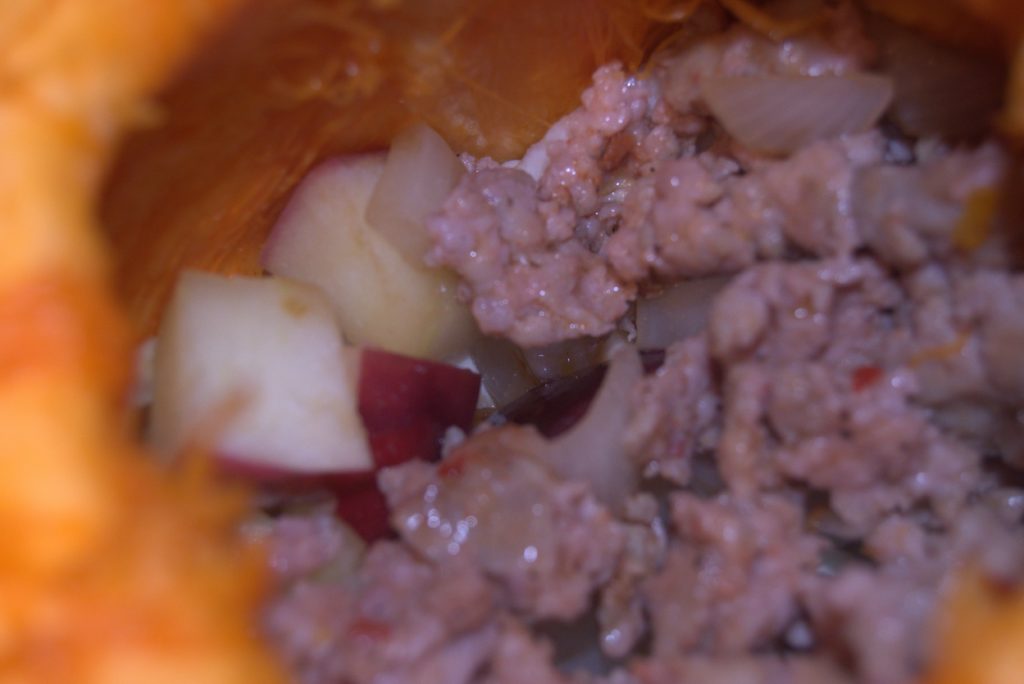 You can layer them any way that you want. Make sure that you have a number of layers of cheese. You will note that I haven’t used spices, so much of the flavor is going to come from the cheese. 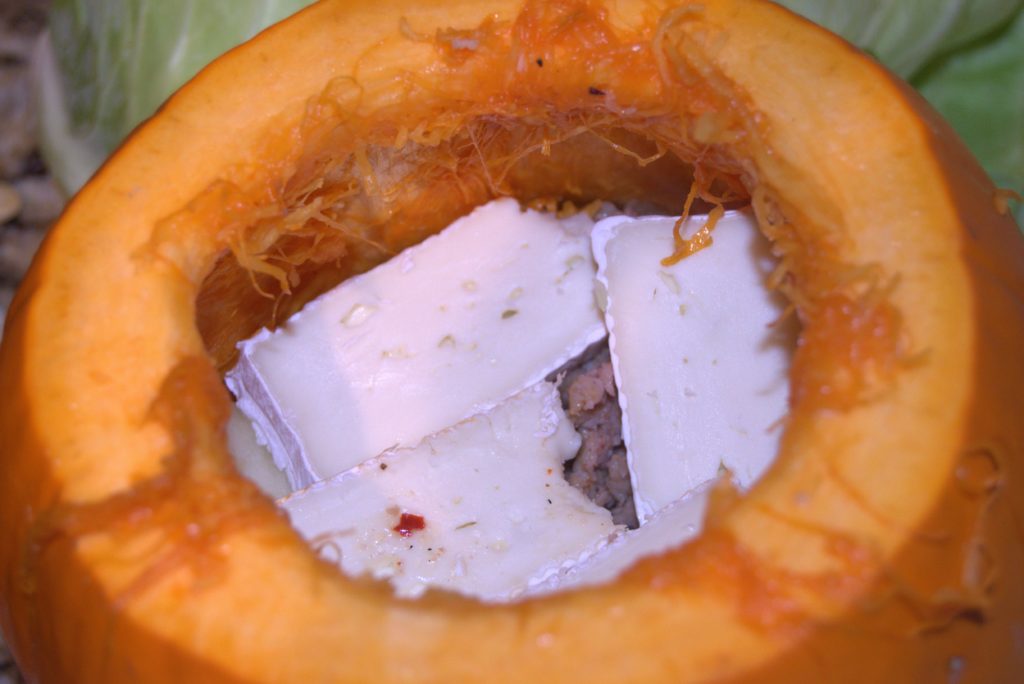 When you have filled your pumpkin, ladle in 1/4-1/2 cup of liquid. In this instance, I used a smoked Turkey stock that I had made at Thanksgiving. This is another reason that I did not use heavy spices. I wanted the smokey stock to shine through. Put the top back on a place in a 375 degree oven for an hour. 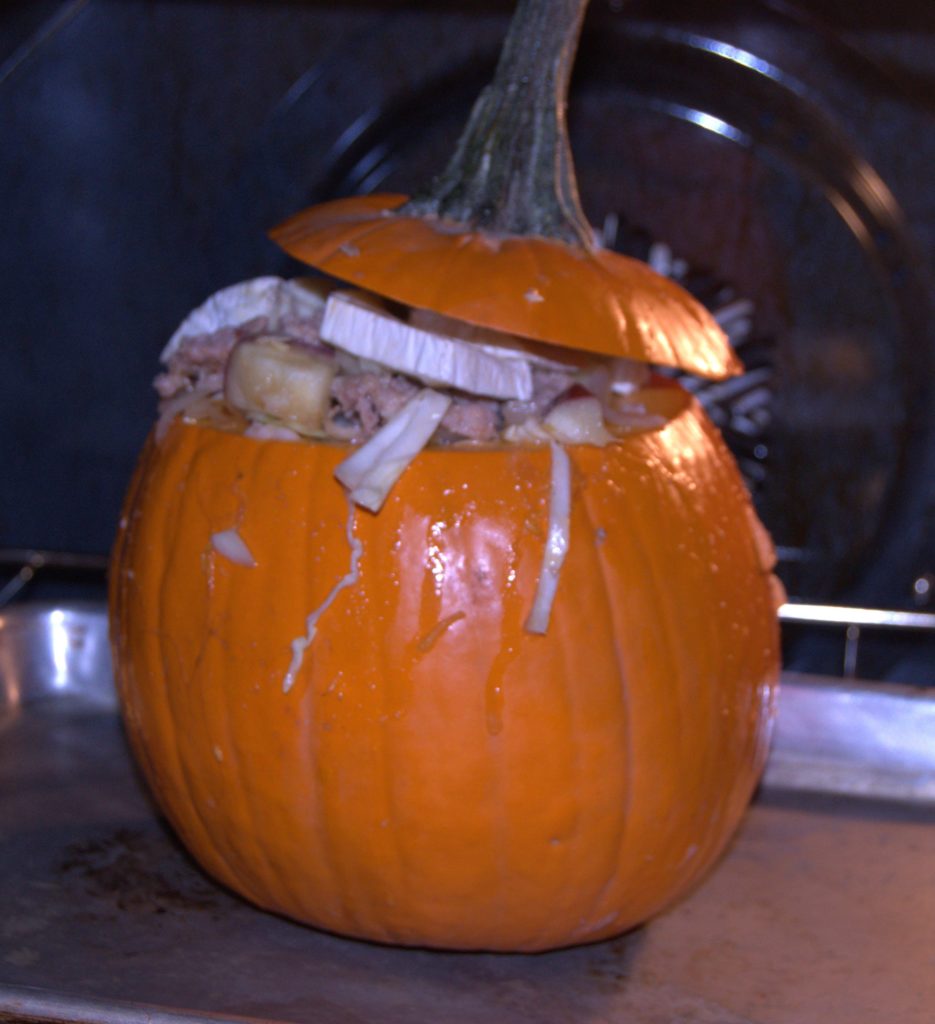 After 30 minutes, remove the “lid” so that the cheesy top can brown. 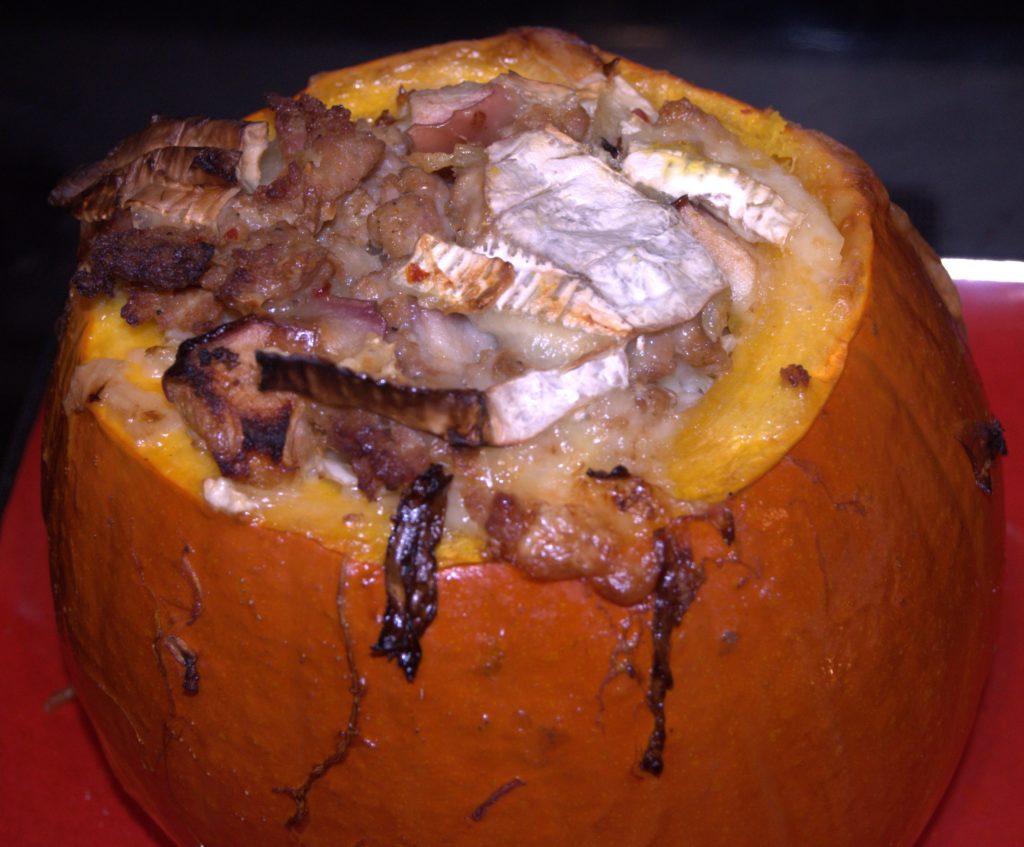 If you bought mini pumpkins, you will want to serve them individually. I bought a small regular pumpkin and cut it in half. 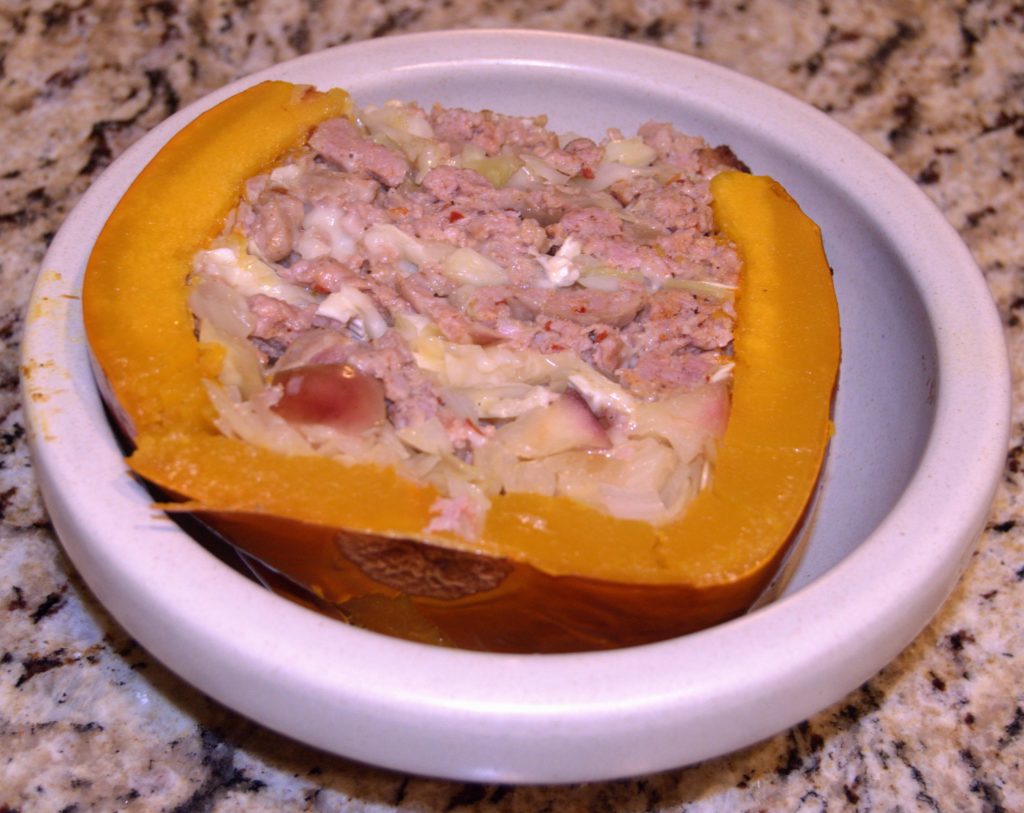 « Food For The Soul: Ribs, Greens and Sweet Potato
Scrambled eggs—really good ones »