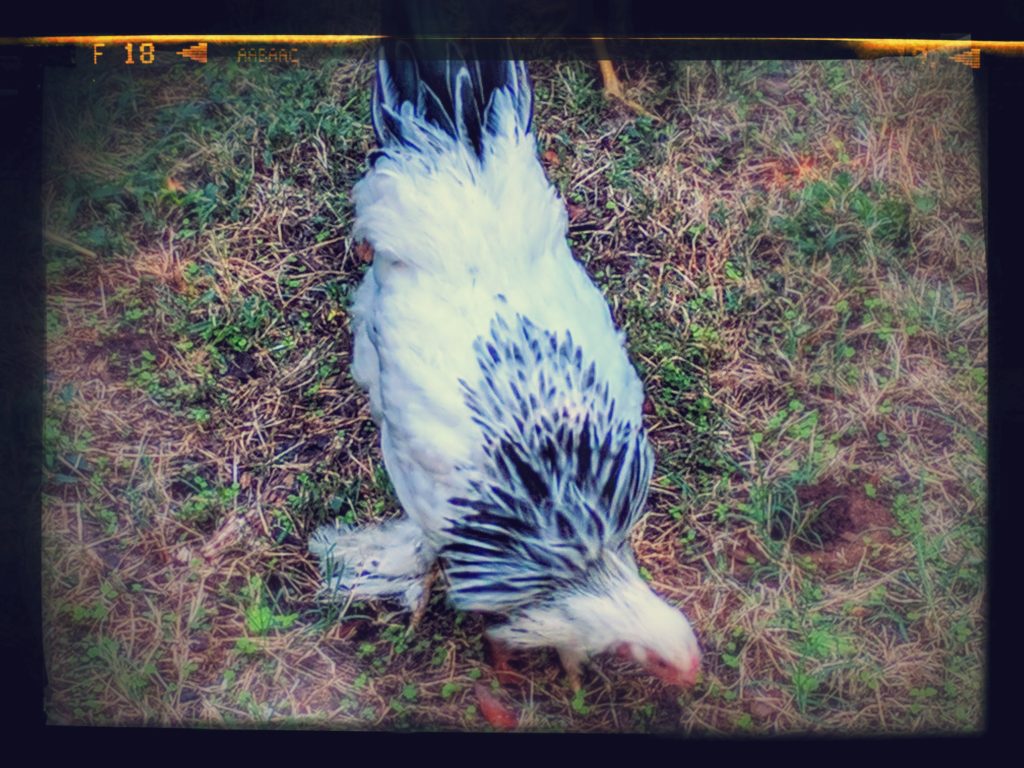 Frankly, I am a little worried about Constance’s tail. Actually, they all look a little manged. It looks as if they have been chewed by the black cat that keeps hanging around the yard. I don’t see any other evidence to confirm my suspicions, but I haven’t been able to find an answer to my “pullet plumage tail feathers” google search either. It is a mystery. The group photos below are all from the day that they arrived home and you can see that their tail-feathers are in fine shape. The individual photographs are from within the last twenty-four hours. It must be a growth thing, but I can’t find reference to it anywhere.

Stephen “The Termite Guy” gave me the address of his dealer, Joyce – a woman who, for the right price, would hook me up with some serious chickens. She lives out in the boonies of Southwestern Oklahoma and a quick phone call was all that was required to know that Joyce was the woman to see. 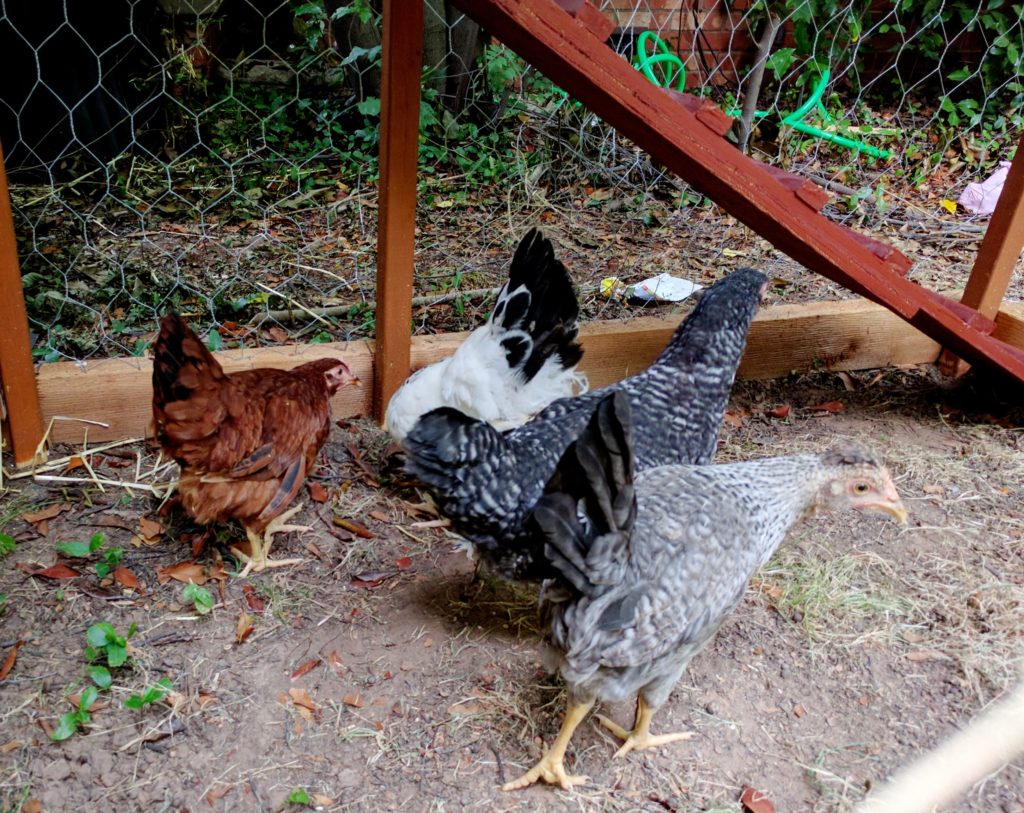 It was a bright day towards the end of summer when I drove out to retrieve my hens. The air conditioning had gone out in my trusty VW, so I put a sheet down in the back of my XJ8 and cruised out to the farm. As with most things, the devil is in the details and my GPS got me to within about a quarter of a mile of my destination and then insisted that I turn into a scary looking abandoned business premises. After a little consternation, I found the farm and Joyce on the front yard waving and smiling.

Joyce is a character. She breeds, hatches and raises chickens. The yard has, a dozen or so, mostly roosters running around, and dozens upon dozens of pullets (young hens) caged. Roosters are in short demand. City slickers like me can’t have them. They make too much noise. Only a few roosters are necessary in a flock and the unnecessary ones will get run off by the cock-o-the-walk! 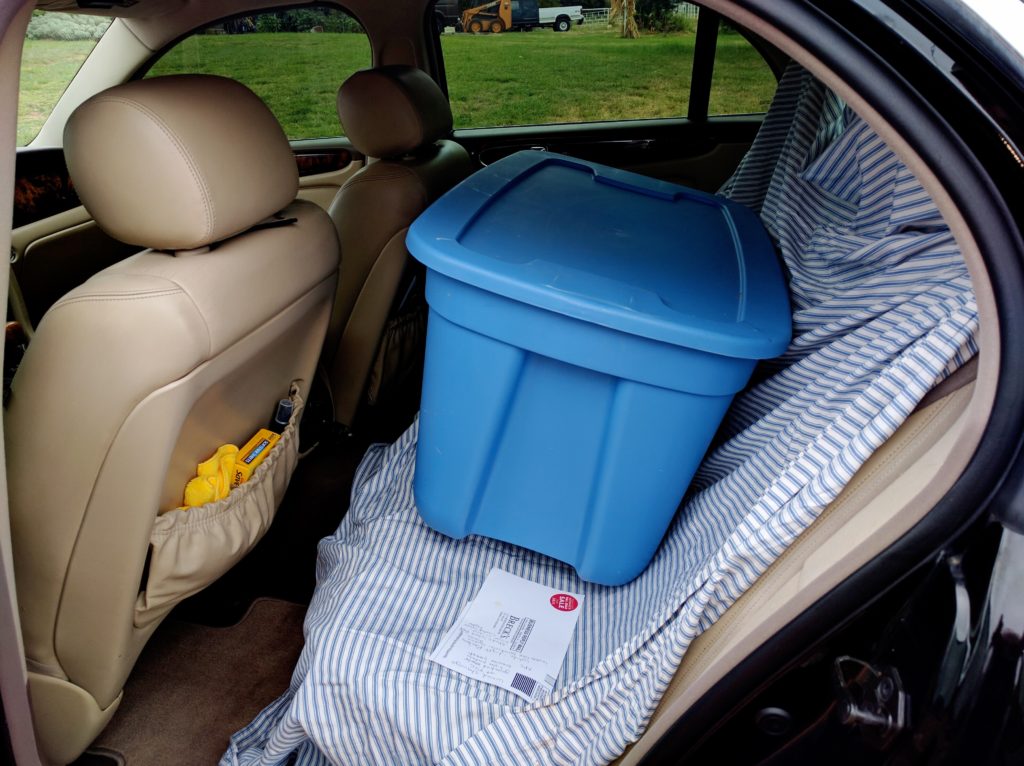 I would like to paint a comic picture of the two of us chasing about the yard, trying to capture wildy flapping hens to carry away. In truth, Joyce reached in and pulled out examples of different breeds. I had in mind that I wanted a classic American bird – the Rhode Island Red. Other than that, my only requirement was that they should be hardy enough to withstand the temperature variations in Oklahoma. While winter is rough on them, they regulate their body temperature pretty well by fluffing and contracting their feathers. Summer, however, is really hard on chickens. Plenty of shade and lots of water for your girls in the hot months 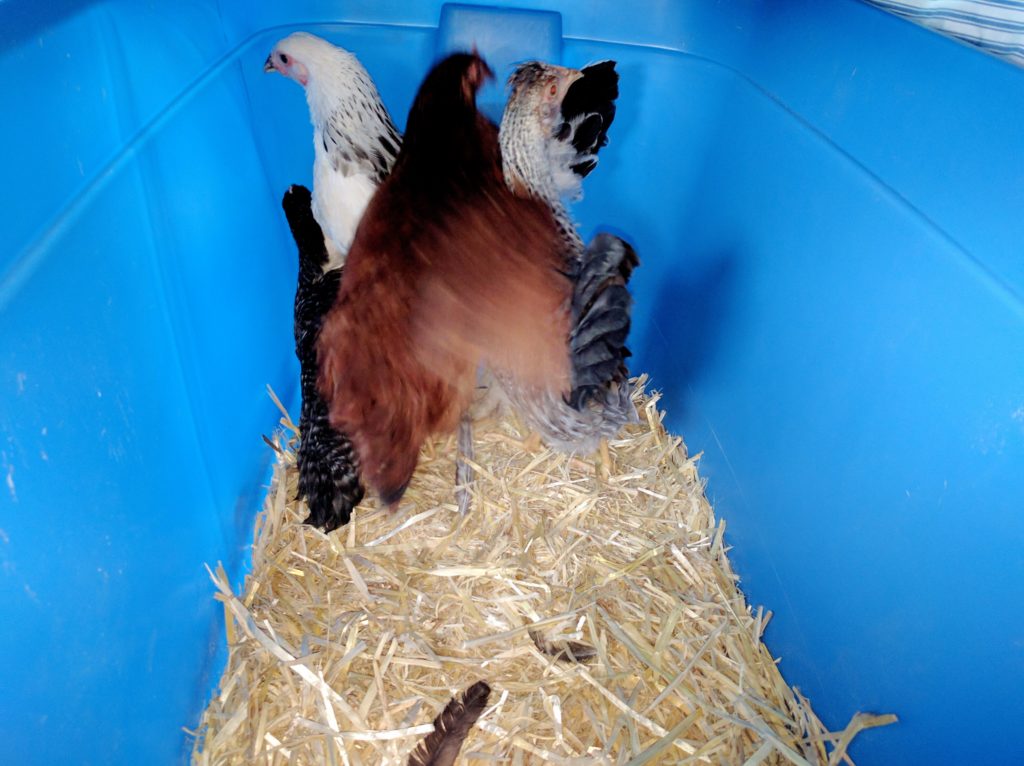 The girls traveled home in the back of my black Jag. My girls ride in style!

So, I would like to introduce you to the girls. 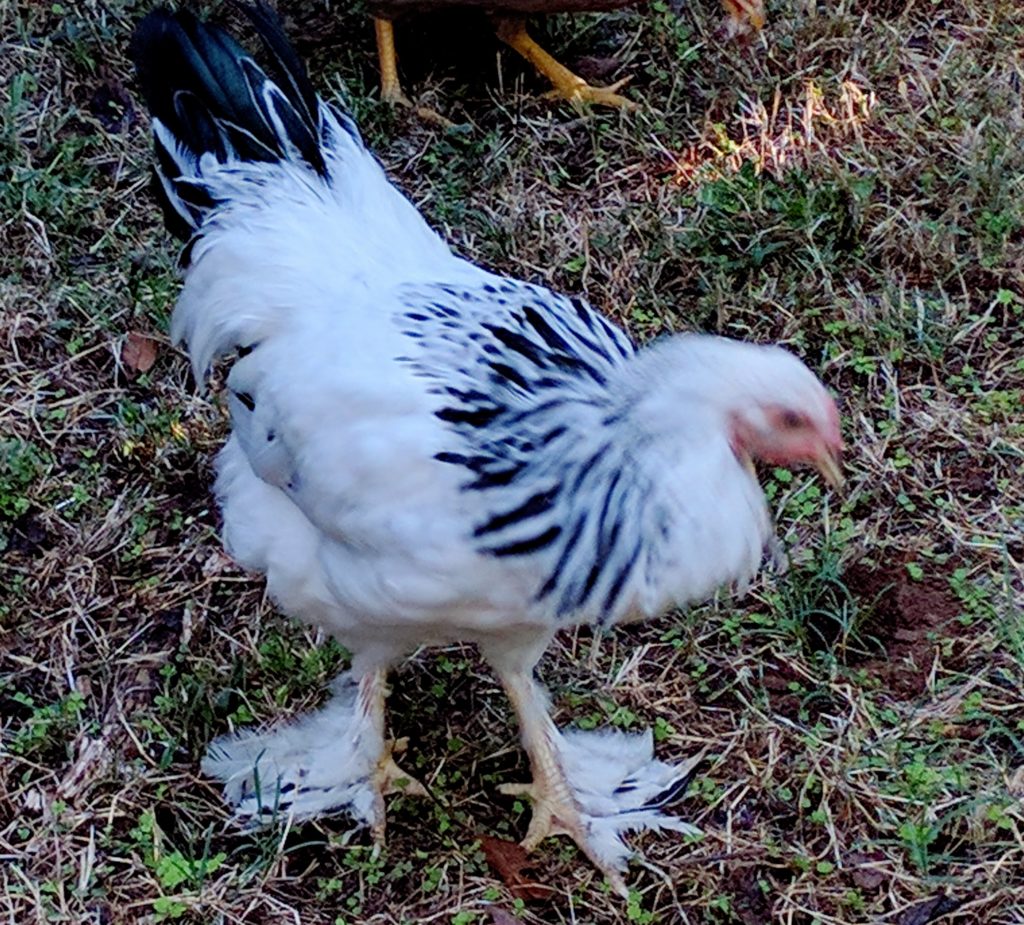 Abigail is a Light Brahma and is very proud of the plumage on her feet. I had no idea until they were a little more grown, but she is the top of the pecking order. Chickens do not understand age, but they do respect size! The fact that Abigail is slightly bigger than the rest, makes her the head honcho. I read somewhere that the top of the pecking order sleeps above the other hens. Actually, the top of the pecking order sleeps wherever she wants. In Abigail’s case, she sleeps on a lower perch, but she sleeps alone. The other three huddle above her and squawk softly to each other. Abigail is usually the first out of the coop and the last one in at night. Sometimes she will return to the run with the other birds, but slip back out again, as if to assert her independence from the others. Her eggs will be light brown. 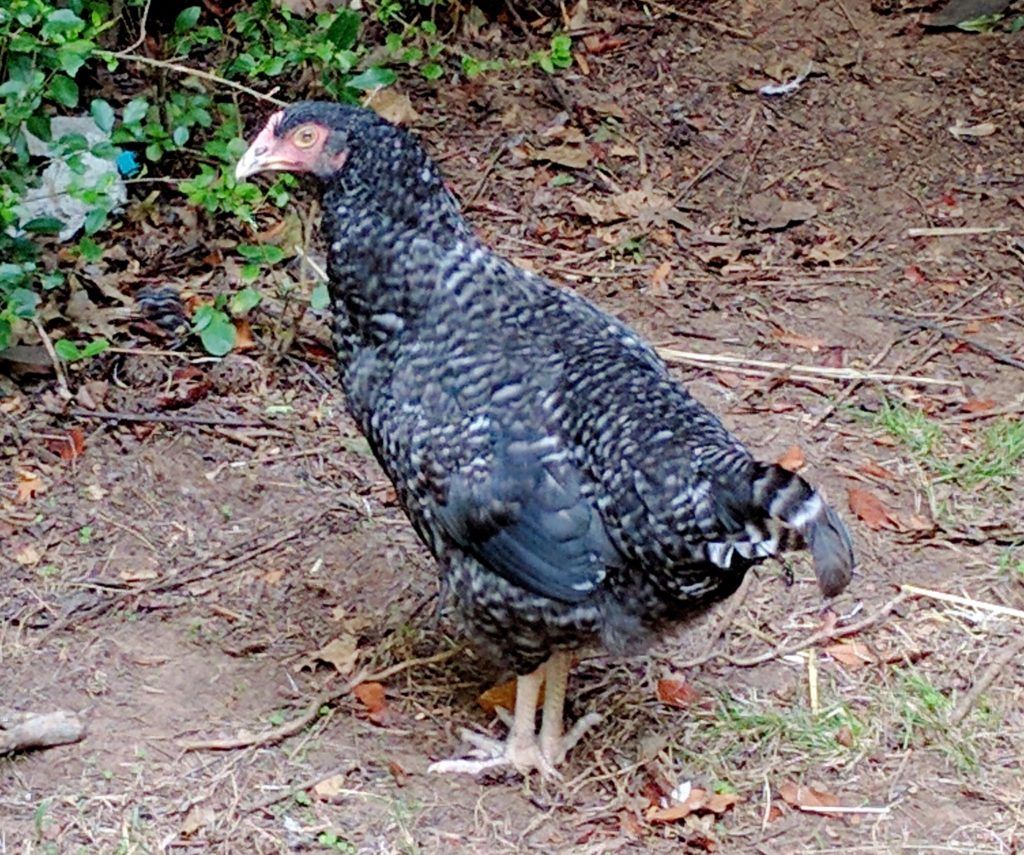 Beatrice is a Cuckoo Maran and is a talker. Chickens do not make much noise. Roosters do and that is why us city-folk with neighbors don’t get to keep ‘em. Beatrice has to comment on everything. The poor dear, she just can’t help herself. Look at me, I just woke up BAWK. You are standing too close, thank you BAWK. Is that something to eat over there BAWK. Like most talkative folks, she hangs around the least smart hen of the flock and talks her ear off! Her eggs will be dark brown. 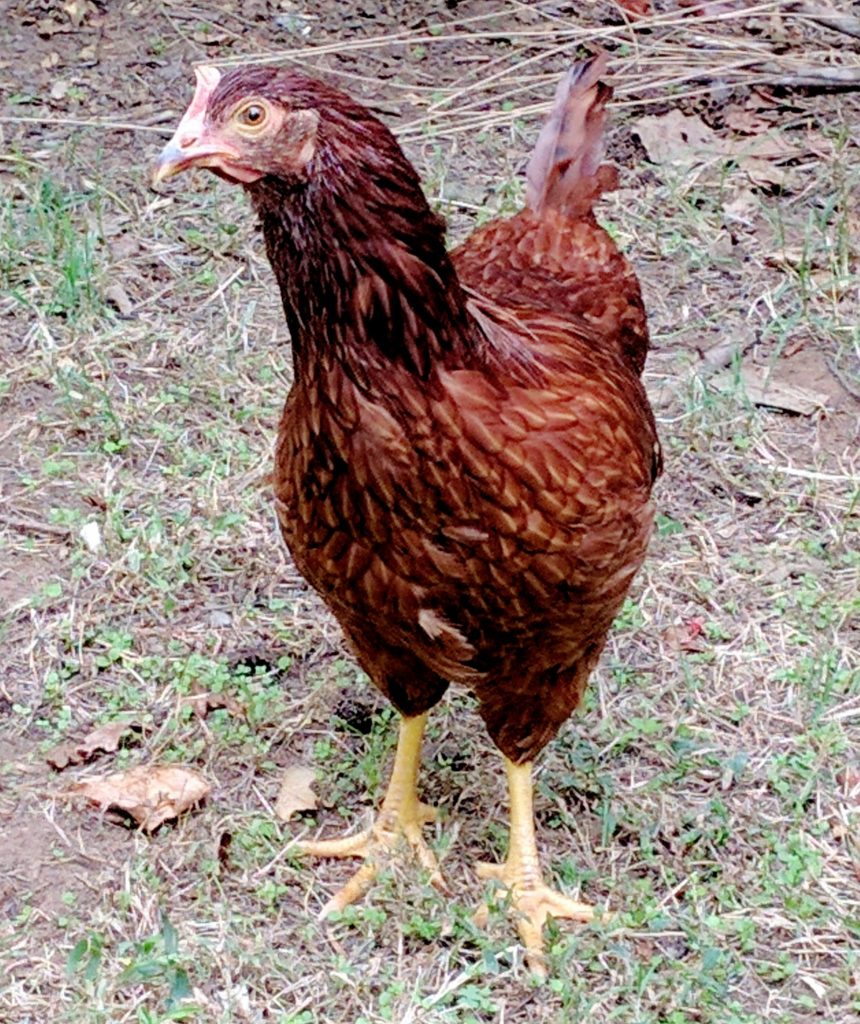 Poor Constance, the Rhode Island Red, is the dummy of the flock. She is mystified by everything that happens. When the other hens have left the coop, she is still running around, trying to work out how they got out. It may take five or ten minutes before she locates the open door that the others found immediately! Her eggs will be light brown. 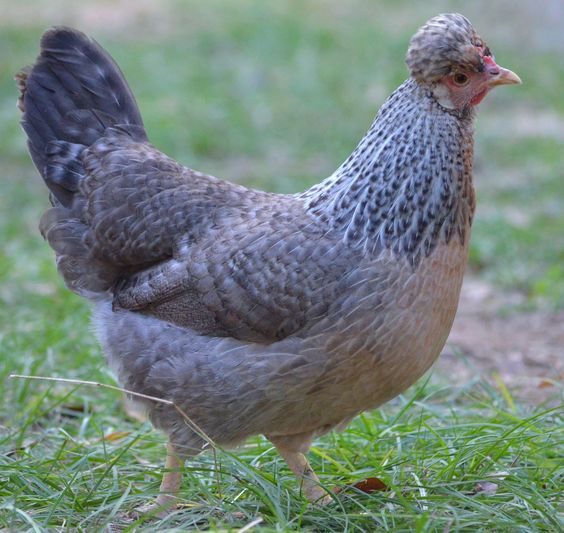 Finally, Dolores is a Crested Cream Legbar. The crested part refers to the feathers on the top of her head. She is a smart gal who hangs out with Abigail. I had intended to have three chickens until my friend Edwina, a country woman through and through, told me that chickens like to hang out in pairs. Joyce backed her up and an extra hen was selected. Dolores is a very attractive gray bird with a brownish red chest, not unlike a robin. In addition to being, perhaps, the prettiest of the flock, she lays blue eggs. I can’t wait! 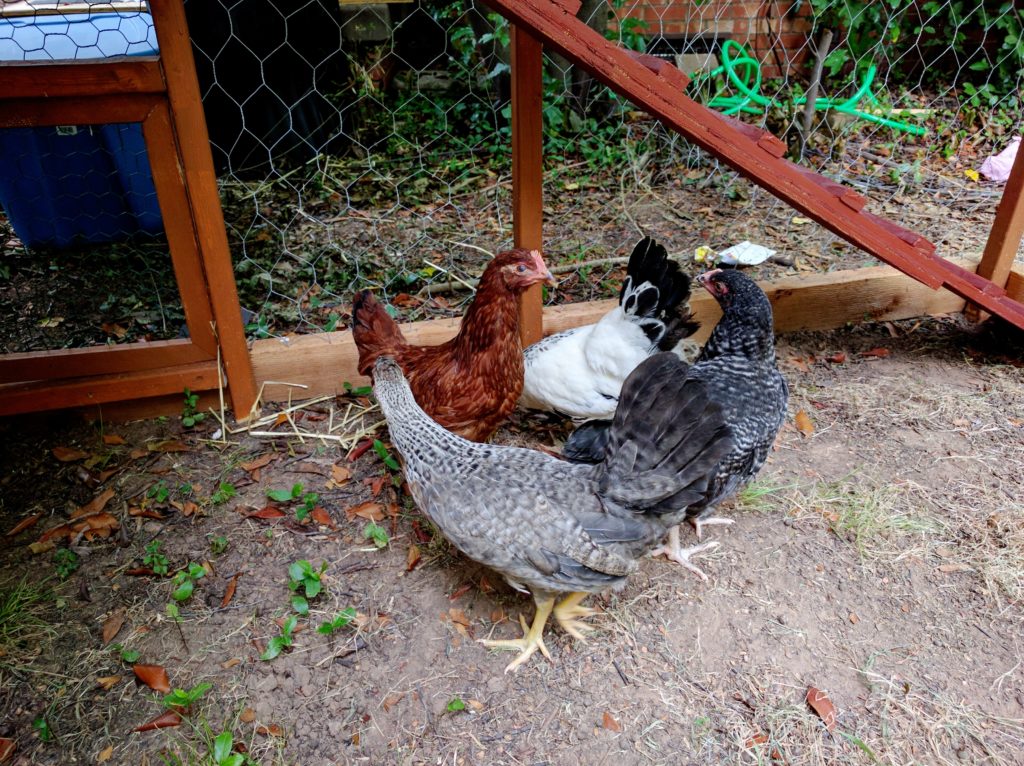 You may want to conclude, gentle reader, that I have grown quite attached to my girls. In fact, my son recently noted that I had chosen splendid names for them and was clearly smitten. I quickly pointed out that I had named them Abigail, Beatrice, Constance and Dolores and the next one might well be Ermintrude. In other words, I had taken very little effort to disguise the fact that my hens are named A, B, C and D. The other thing that I am not trying too hard to hide is the fact that, if they do not lay eggs, they are destined for the stew-pot.