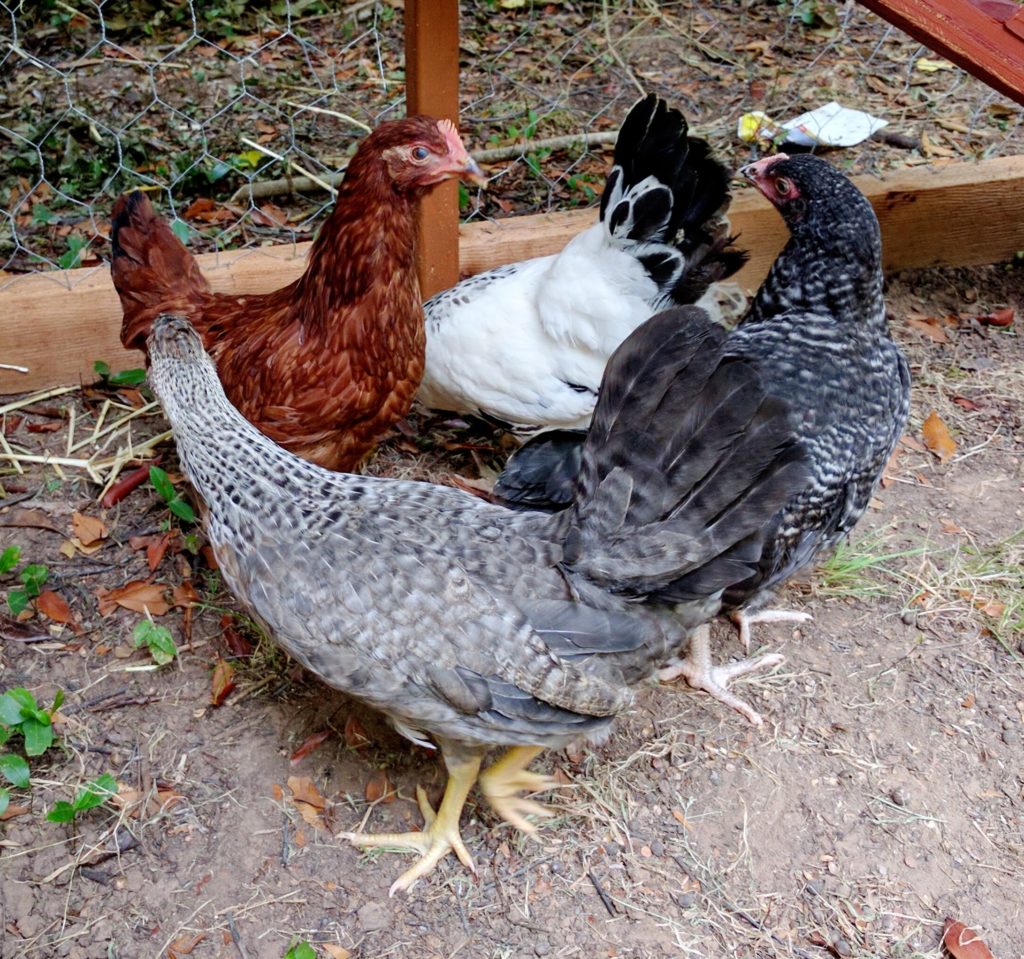 I wasn’t sure that my journey toward urban homesteading belonged on this blog until Karl encouraged me to document it. As with most things, it is impossible to tell where in my journey I am. I suspect – and hope – that this is merely the beginning, but who can tell. I will certainly keep you informed. 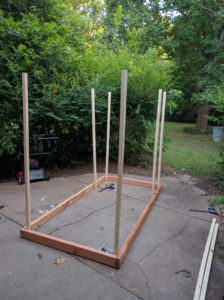 Incipe! You start at the beginning and keep going until the end.

Dennis was the one who piqued my curiosity. I had been thinking about a dog for some time, but my lifestyle does not really allow for such a high maintenance pet. “I have to leave my chickens in Baltimore!” he complained. I was slightly shocked by the passion behind his statement, but he was in earnest. He originally bought the chickens for his twin nine-year-old daughters. However, he fell in love with his fowl and, as happens with most children’s pets, he became the principle caretaker and chicken wrangler. I listened as he waxed lyrical and formed a plan. 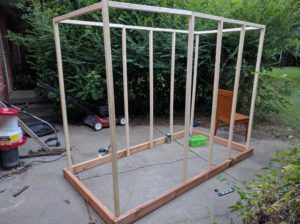 The ceder base should make it less resistant to rot and – at least initially – wood destroying insects like termites.

I do not claim to be the author of this idea. I was sat in class last week (don’t ask – I am 54 and still in school!) and the teacher laid this piece of wisdom upon us. There are two kinds of people in this world; digital natives and digital immigrants. That struck a chord and I realized that, while I am technically a digital immigrant, I have assimilated quite nicely. The point of this digression? I have learned to plunder the internet before I start in on any project. With the idea of keeping chickens in my suburban, campus-adjacent home in Norman, Oklahoma, I went in search of poultry information. 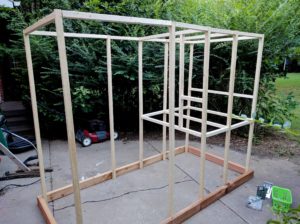 I quickly learned how to frame. Even if it isn’t perfect, who is going to compain – the cheickens?

This city of Norman web site is highly informative and all of the necessary ordinances are easily found. 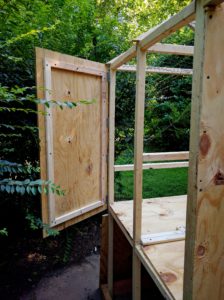 Clean-out doors were a natural addition to the plans. I even doubled the coop so that there would be no doubt that I was complying with city ordinances. Also, I wanted a seperate roosting box so that they didn’t poop on each other’s heads when they were laying.

The main issue was what to do about the coop itself. In this hipster world, chicken coops can be purchased on-line, at your local Tractor Supply/Atwoods or even, believe it or not, at Sam’s Club. I do most of my shopping on line. I wouldn’t be caught dead in my local mall. However, a good art supply or hardware store will bring out the shopper in me. I love to browse technical knick-knacks and can lose myself for hours on end in old-fashioned hardware bins. So the chance to hang out in my local farm store was too delicious to turn down and off I went to my local Atwoods.

I found it hard to believe that people who work as hard as farmers work would throw their money away on the flimsy coops that I found before me. I went on line and researched the reviews and found that I was not alone. “Flimsy,” “Cheap,” and “Won’t last a single season” were the consistent comments. With a sense of foreboding, I knew that there was only one way to solve the problem – build it yourself. 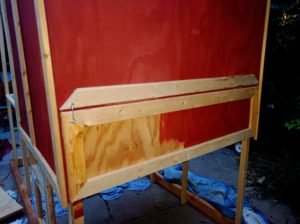 This is the egg-collecting hatch, as seen from the outside. 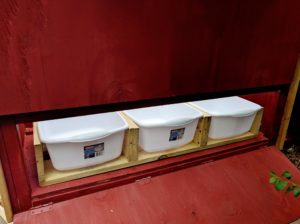 Nesting boxes, lined with washing up tubs for easy collection and clean out. 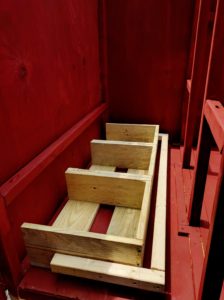 Now, I am a highly trained man. I can think well, cook well and seem to handle money and contracts better than most. However, I have absolutely no construction skills whatsoever. I hit the internet to see what help was available to me. Lots of sites said that chickens will roost in just about anything, but the city of Norman have other ideas. The only things that I was sure of was that, whatever the quality of construction, my coop was going to be more robust than anything that I have seen and if the construction wasn’t up to snuff, who was going to complain – the chickens?

I took every idea that the internet had to offer and settled upon a coop design. The next step was my local hardware store. My biggest problem, apart from the fact that a miter saw needed to be acquired, was how I was going to transport everything. I have two cars. One is my Sunday-best Jaguar XJ8 which, while very handsome, is not the greatest for carting lumber. My VW Jetta, on the other hand, is not the largest vehicle on the road, but its fold-down rear seats make it surprisingly roomy. I am not saying that I didn’t look like a dust-bowl era Okie making the trip west to California, but I got the job done. It also helps to know that your local hardware store (the blue one, not the orange one) will make ten cuts free of charge. Just make sure that you have an accurate lumber list and know what your cuts need to be in order to get it into your vehicle. 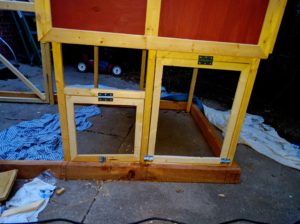 All I can tell you about the build is that I took it one step at a time. I am a working guy and a novice carpenter. This means that I had a couple of hours a day, at most. Somedays I wasn’t able to do anything. However, the one foot in front of the other approach made plenty of sense. It gave me the chance to think things through, double-check techniques and methods on the internet, before a single cut was made or joint screwed in place. I can tell you that my biggest mistake was not checking that all of my 2x2s were straight. I have a warped board at one corner of the coop and it made life very difficult and not entirely pretty. But hey, who’s complaining – the chickens? 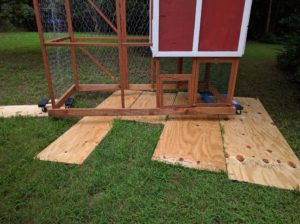 This coop is built like a victorian brick out-house and is heavier than heck. Moving it on my own was no small feat of engineering!

The wonderful thing about a project like this is that there is no pressure. I had anticipated getting my chickens about two months earlier than actually took place. However, they didn’t know that and I was having a geat time! Each coop construction session brought with it a new set of problems to be solved. Sometimes I got them right the first time, oftentimes, not – but I got there in the end and learned a thing or two along the way. 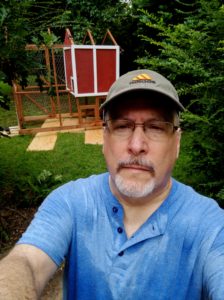 It was hot, hard work and I was grouchy!

Once you commit to chickens, you discover that there are more chicken fanciers  out there among your friends and colleagues than you ever imagined. Stephen “The Termite Guy” is one of them. We were at a home inspection one day and talk turned to chickens (I was really caught up in this project!). He confessed to being a proud flock owner for nearly three years and could he come over and see my coop? His neighbor gave him his coop, along with his first flock, and I could tell that he was sad that he had not had the opportunity to make his coop himself. 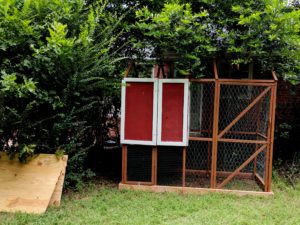 I moved the coop into place before I put the roof on. It was heavy enough as it was and I didn’t want to make it heavier.

When he came over he was suitably impressed and I was suitably heartened, considering that this was my very first construction job. Like most chicken enthusiasts, he had suggestions to make. I hadn’t thought about a sheet metal floor to make cleaning easier, so I quickly incorporated that into the build. For less than ten dollars, I now had a coop that was impervious to poultry pee and poop! Since the floor was going to be coverd with wood shavings, the birds wouldn’t slip about on the shiny surface and injure themselves. Thanks, Stephen, nice idea! 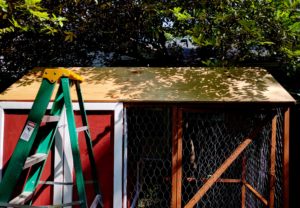 I left what I thought would be the hardest part to last – the roof. Another suggestion, from my customer, Glenn, was a corrugated plastic roof. This is a great idea. Chickens are hard-wired to respond to light. It tells them when to get going in the morning and it brings them back to the coop in the evening. It also determines the egg production, so that winter months, with their shorter days, see a drop in numbers. An opaque plastic that allows light through makes absolute sense. However, I already had my heart set on learning how to shingle a roof. The materials were already in the garage and, even though I was procrastinating, wrangling the three-tab composite shingles into a water-proof barier for my girls was about to take place 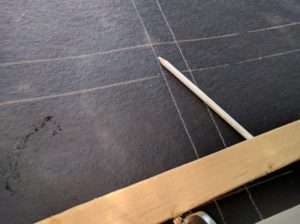 Felting comes pre-marked with helpful lines to keep you square. I have a tailor’s pencil which I use for book making projects, thqt came in handy to make extra lines. 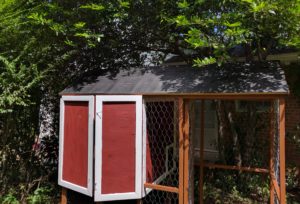 If you get the felting down square, it makes the rest of the job so much easier.

The judicious use of clamps made the fixing of the ply-wood to the framing for the roof eerily easy. I also managed to put the heavy-guage felting down with the lines square. That meant that the actual shingling began a lot faster than I had anticipated. Don’t get me wrong. There are dozens of YouTube videos to teach you how to shingle. I watched all of them. Some of them I watched several times! 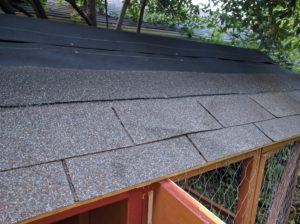 If you start out right, shingling is actually very easy. If you do not pay attention and shorten the shingle on your first row, then you have to pay close attention and make sure that it gets shortened on the next or you are going to have problems. The first side of the roof is a really good execution. I am pleased that people will not get to see the other side. Anyway, who’s complaining – the chickens? 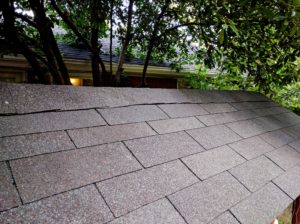 The last part of the job was the ridge cap. Three-tab shingls are cut down and nailed sideways to produce the final waterproofing element. Like the rest of the job, it turned out to be much easier than I expected!

Finally, the coop was completed and I was ready to bring the girls home! And that, as they say, is another story . . .

End of Part One. 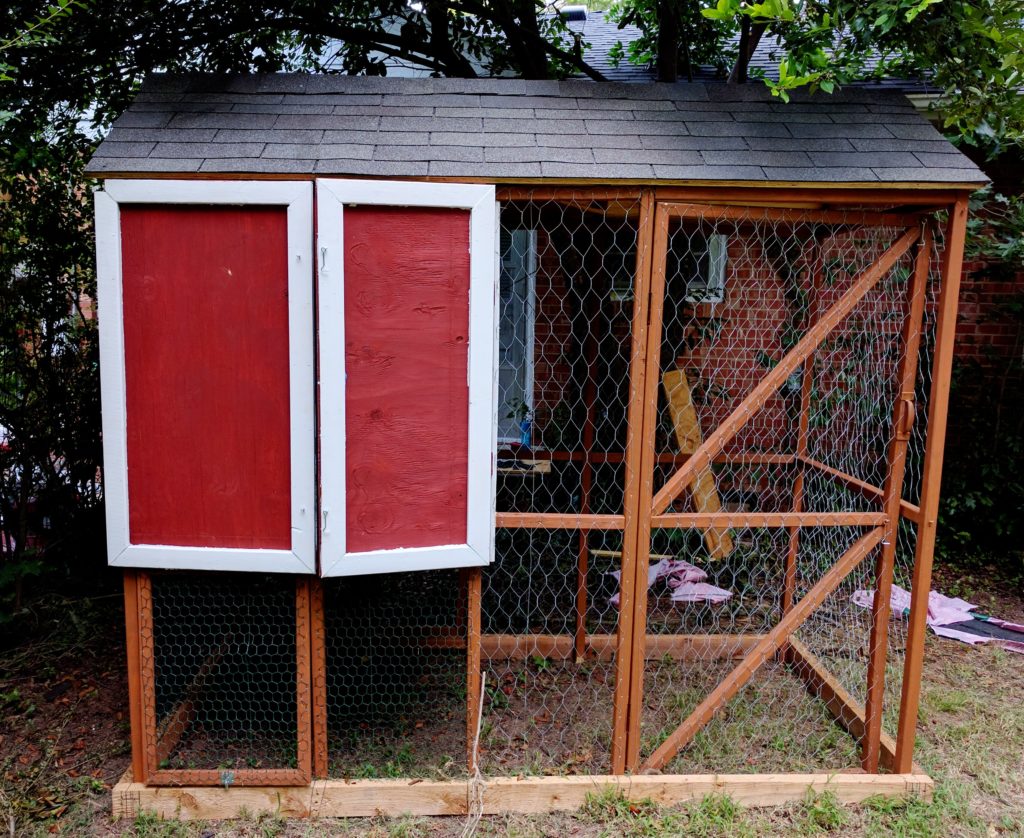