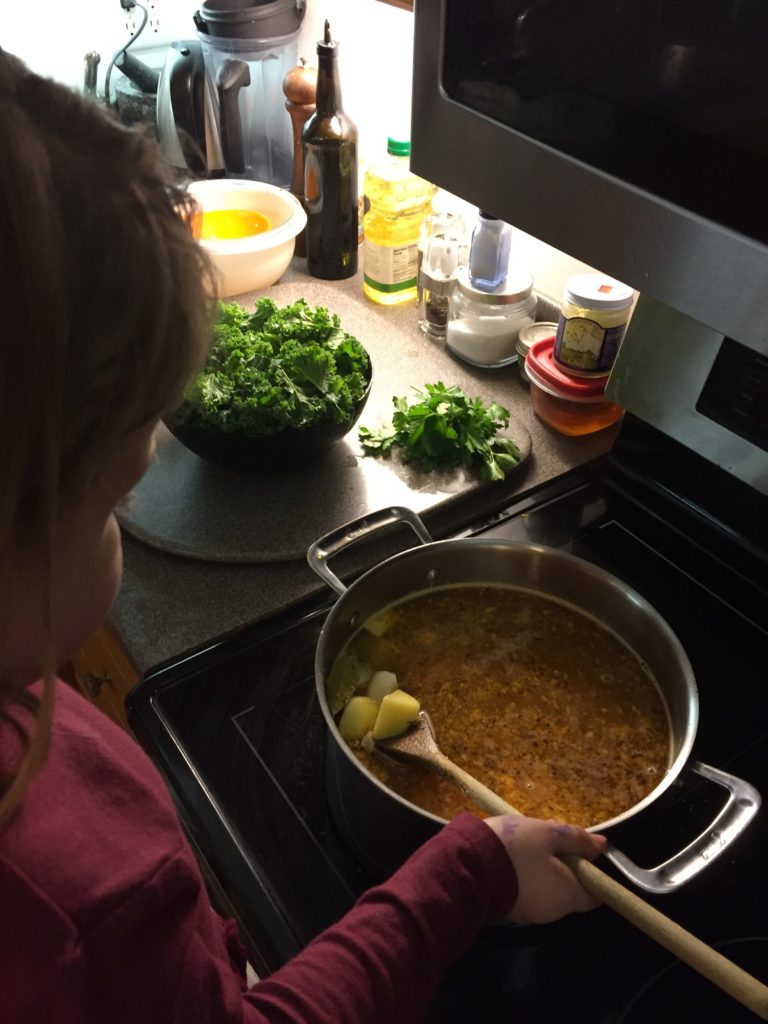 It’s cold outside. You need soup. But you do not want a broth-y, noodle-laden, sodium-filled soup from a can. It’s gotta be hearty and filling. You want your soup to fetch a blanket and wrap you up, maybe throw another log on the fire and dim the light. You want to be sated. There’s a soup for that.

Soup, as comfort food, often conjures images of cream-based soups, like broccoli cheese soup, or potato soup dressed up to look like a blended, loaded baked potato. These are delicious and will do the trick, but we’re four months into to the new year, and if you are anything like me, you haven’t quite shed the extra pounds from last year’s, gluttonous holiday binge-eating period and the two feet of snow outside has added to your inactivity—save for the endless shoveling of snow. This soup has to be a little healthy, and yes…there’s a soup for that.

Caldo verde is a Portuguese and Brazilian soup that combines the starchy goodness of potatoes, the power-packed, super-food punch of kale, and the meatiness of smoked sausage to make the perfect soup for this time of year. It’s also incredibly quick and simple to prepare, very affordable, and way better for you than those cream-based soups. you can easily adjust recipe to be vegetarian, low sodium, or reduced fat to suit dietary needs. The name translates to English as “green broth,” but that doesn’t fully capture the comforting quality that is caldo verde.

The method is simple:

Sauté the onion until soft.

Stir in the garlic and bay leaf.

Add the stock, water, and potatoes.

Boil gently until the Yukon Gold potatoes have almost cooked through.

After 20 minutes, the starchier russet starts to break down and the soup begins to thicken. Add the kale, and cook to desired tenderness. Then add the sausage, and cook to heat thoroughly.

Remove from the heat and stir in parsley.

Season with salt and pepper. 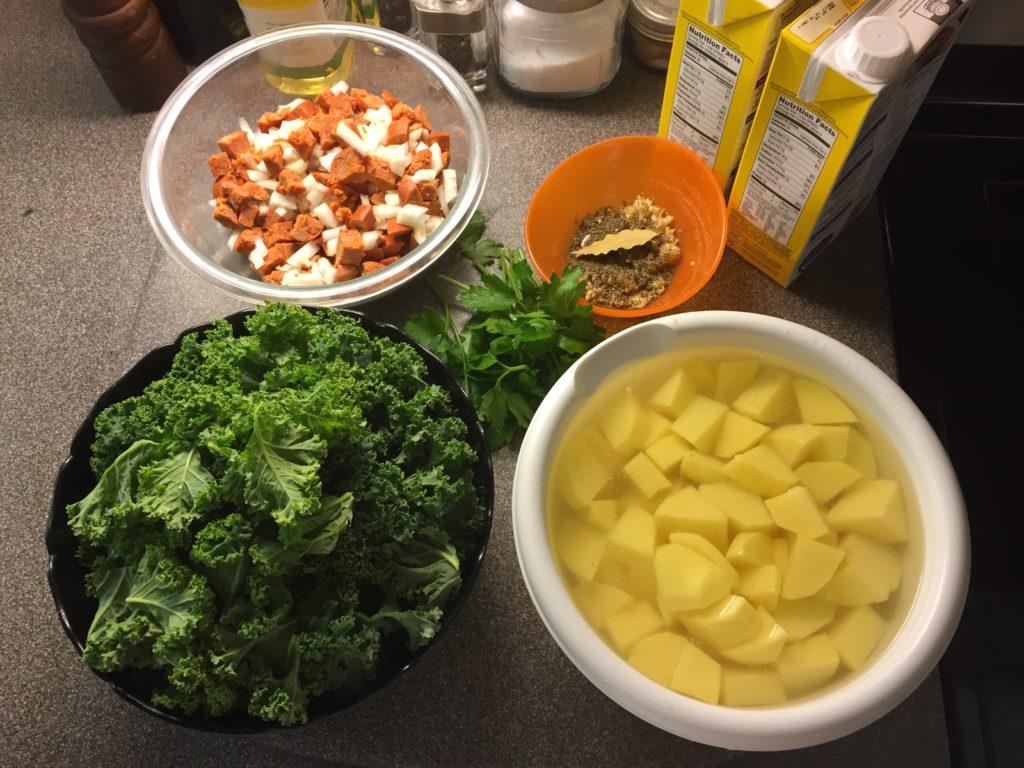 Linguiça and chouriço are found in Portuguese and Brazilian food. ( Common in Portuguese and Brazilian dishes, linquinça chouriço are coarsely ground, slightly fatty pork sausages and can found in a range of spice levels. They’re ubiquitous here in New England but may be difficult to locate in some other parts of the country. Sub sub with any smoked sausage or use turkey sausage for a lighter, less fatty alternative.) 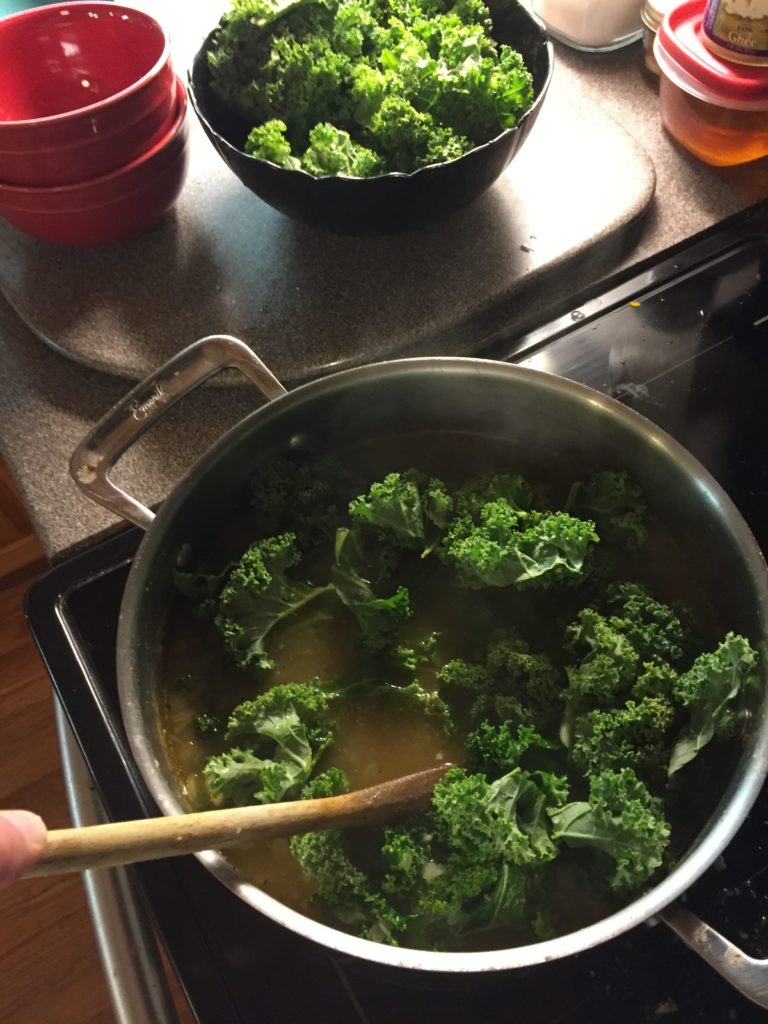 I added turkey linguiça at the beginning with the onions. The last time I made this soup my offspring pushed the large meat pieces around so much just to get to the velvety potatoes and the occasional piece of coerced kale. This prompted me to add the sausage at the beginning and cut it into smaller chunks yielding the homogeneous texture that my kids preferred. The longer cooking time softens and break up the sausage. Adding the sausage at the end will leave the pieces whole and meaty and likely avoided by most children. 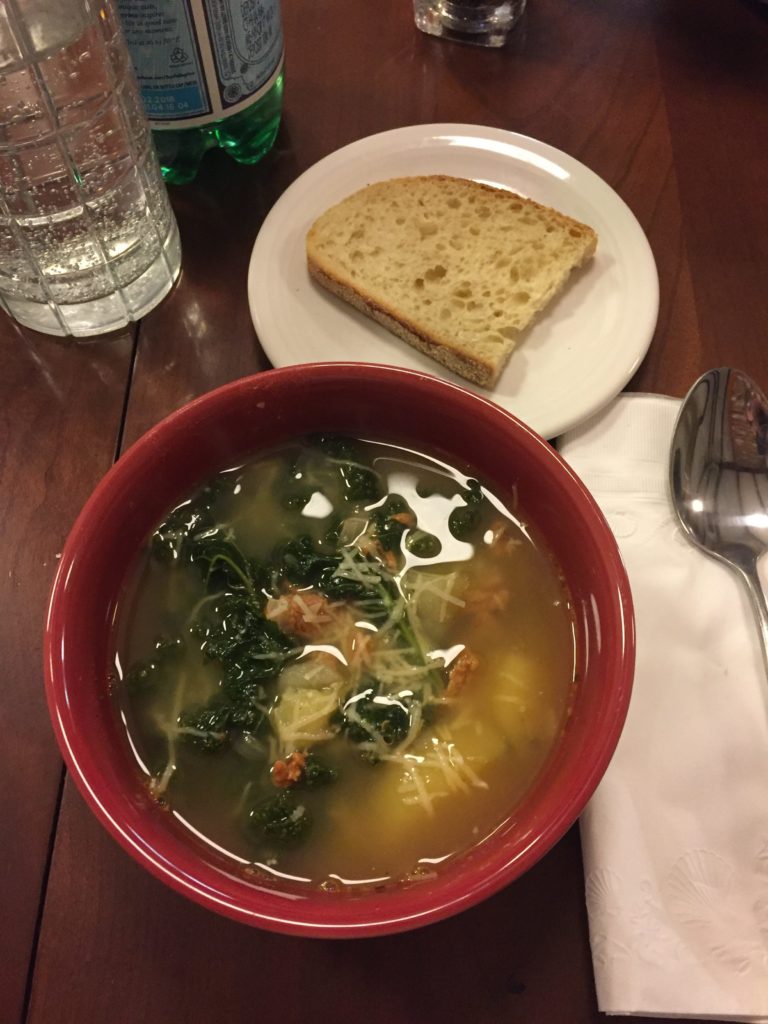