He’s right. And that set me thinking about a desert bar with lots of cinnamon, so I grabbed a couple of the ubiquitous recipes for “blondies” (hate that word, it’s creepy) and a crumb topping, altered them for my tastes and the result is what’s posted here.

The idea of cinnamon bars with a coffee-cake-style crumble topping may seem too over the top with sugar and cinnamon, but it actually needed MORE cinnamon than what I had originally added. The bars were good, but all who ate them agreed that more cinnamon would make them better. Please keep that in mind if you make these. And the crumble recipe is the perfect amount for the bars.

Here’s a note for after reading how to make these: if I were to make them again, I would first make and cook the crumble top. Then, mix a double batch of the bars and pour half in the baking dish, sprinkle on the crumble top, then add the rest of the batch and bake. When cooked and cooled, cover with cinnamon frosting. That seems like it would be delicious.

What you’ll need for the crumble:

Whisk the flour, cinnamon and two sugars in a medium bowl. Stir in the melted butter and mix until the four starts clumping up. Spread the crumbs/clumps into a rimmed baking sheet lined with parchment paper and back at 325 degrees (preheated) for about 20 minutes or until crisp. Let them cool while you’re making the bars.

In a medium bowl, whisk the melted butter into the sugar, then add the beaten egg and flavor extract, then whisk some more.

Whisk the flour, baking soda, baking powder, cinnamon, in a separate bowl, then add them to the other bowl and mix well. Add the toffee or whatever chips you chose and mix them in, too.

Pour into the pan and spread evenly. Bake for 10 minutes, then take out and sprinkle all of the cinnamon crumbles over the top and lightly press them into the batter. Continue cooking for another 20 minutes, then begin checking for doneness every 5 minutes (a toothpick inserted into the middle comes out clean) until done. The original cooking time for these bars is 25-30 minutes, but the crumbles added to the top really adds to the cooking time. Be patient.

When done, cool, cut and serve. 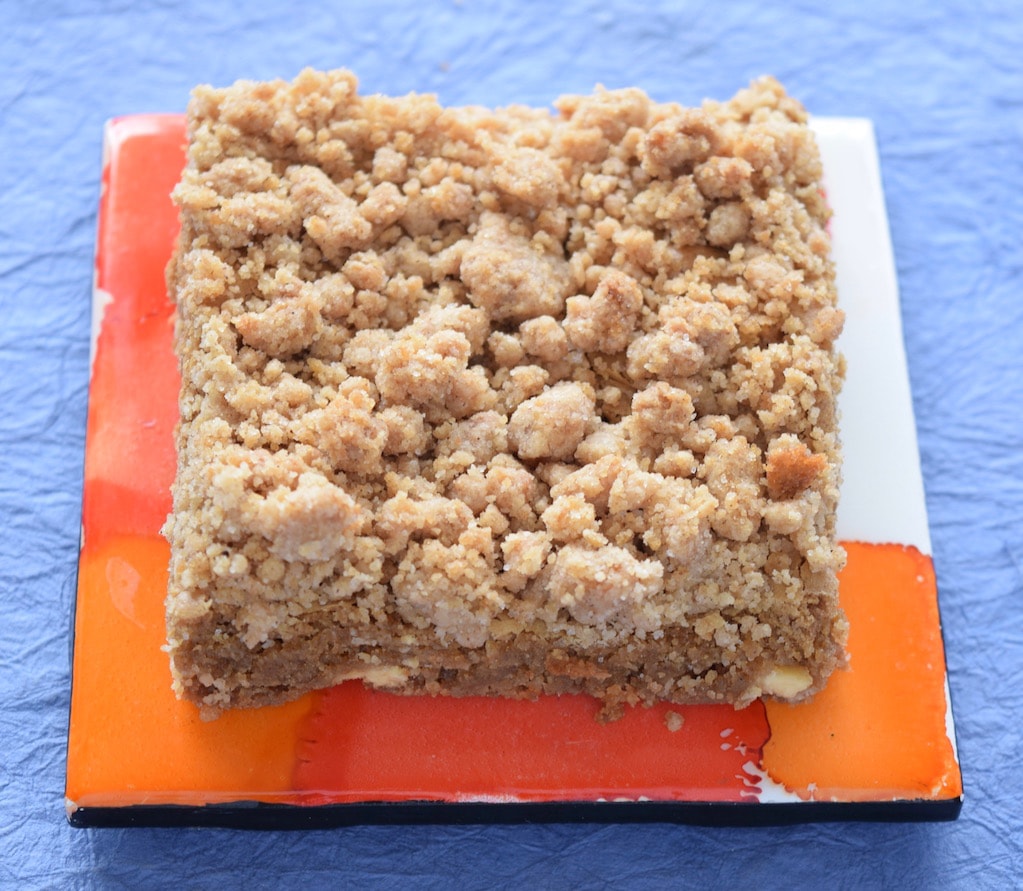