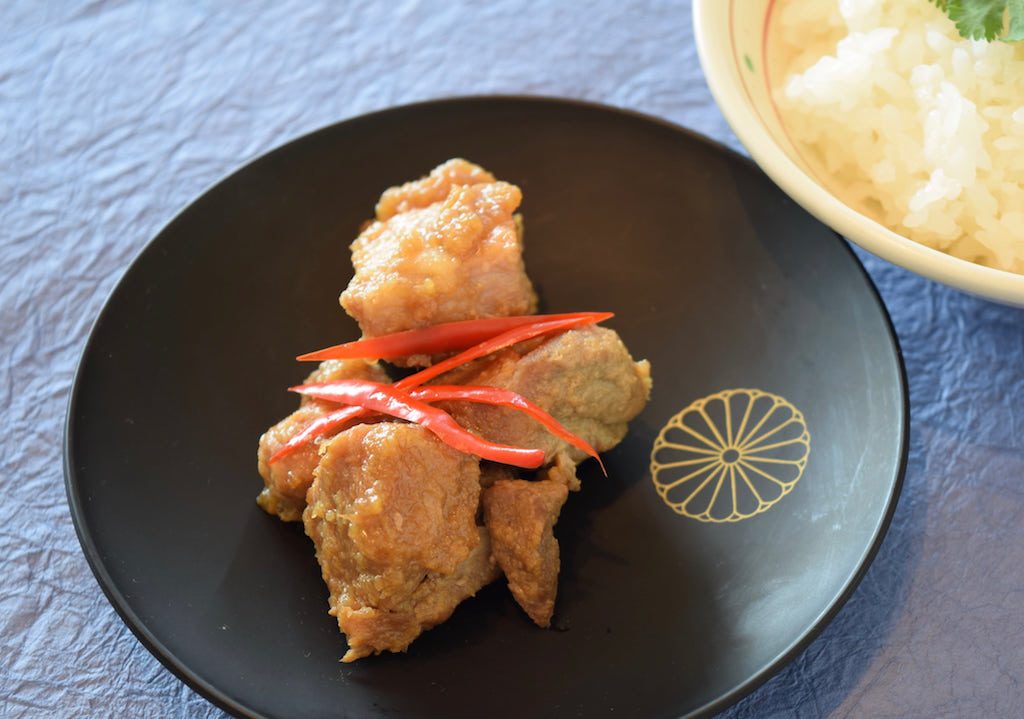 Yes, that’s a Japanese design on the dish. Mixing up cultures, I know.

In my cooking experience, it seems that slow-braising meat of any type leads to a tender dish that could be cut with a fork. If you take that, paired with the right kind of seasonings, you’ve got a winner recipe.

Many cultures have braised-meat dishes, but my favorites are usually from Asia, specifically from Japan and, you guessed it, Indonesia. Beef rendang and coconut chicken, which are basically braised in highly-flavored coconut milk, are two of the most delicious, tender dishes you can possibly make.

But what about our friend, the pig? Yeah, I’ve made this and this, but today’s braised pork dish beats them both. It’s cooked in a soy sauce- and shallot-based broth, which turns out very flavorful and super tender.

And, of course, this recipe is from my favorite cookbook, Cradle of Flavor, but it’s from Malaysia, though, not Indonesia.

*Galangal can be found either fresh or frozen in many Asian grocery stores. Unfortunately, there aren’t good substitutes for it. Don’t use ginger, because it has a very different flavor. Here’s a good article about galangal, along with some photos.

**Make sure to use a non-lean cut for this, such as shoulder. If the meat is too lean, it will be a little dry.

***I had only regular soy sauce available. The recipe still worked well, but it didn’t have the rich, dark color that double-black gives it.

Pulse the chopped shallots in a food processor until they are a smooth paste. If they stick to the sides of the processor, throw in a tablespoon or so of water. That will loosen things up.

Heat the oil in a 3- or 4-quart saucepan, Dutch oven, or similar vessel over medium heat. Add the galangal and cook, stirring often, until the edges turn golden and you can clearly smell its fragrance.

Add the shallot paste and cook until no longer raw-smelling, about 3-4 minutes. Be careful not to over-brown the shallot paste, or it will give the dish an odd taste. Remove the pan from the heat and add the cinnamon, cloves and star anise, then sauté until you can clearly smell each spice cooking.

Return the pan to the heat and add the pork cubes, browning them on all sides, about 5-10 minutes. Work in two batches if your pan is not large enough to properly brown them all at once. Add the water, vinegar, soy sauce and sugar, stirring well to combine. Bring the liquid to a bubbly boil, then immediately reduce the heat to low.

Partially cover the pan and continue cooking at a gentle simmer, stirring sometimes, until about 75% of the liquid has evaporated and the meat has a little resistance when poked with a fork. This may take two or so hours. Be careful not to overcook the pork until it gets mushy.

At this point, completely remove the lid and raise the heat to medium, stirring often and gently so as to not tear apart the meat cubes. Continue cooking until only a thick, chocolate brown reduction clings to the meat. This may take about 30 minutes, depending on how much liquid was in the pan. At this point, you can drain off any unwanted fat that rendered from the meat, but save it for cooking something else: it is very flavorful.

Transfer the pork to a serving dish and allow it to rest for 30 minutes, as the flavors intensify. If you plan ahead, this dish tastes even better if it is chilled overnight and reheated before serving.

It’s debatable if you can eat the galangal matchsticks. Depending on the root you used and how thin it was sliced, it may be edible. If the root was particularly tough and fibrous, it’s harder to chew. 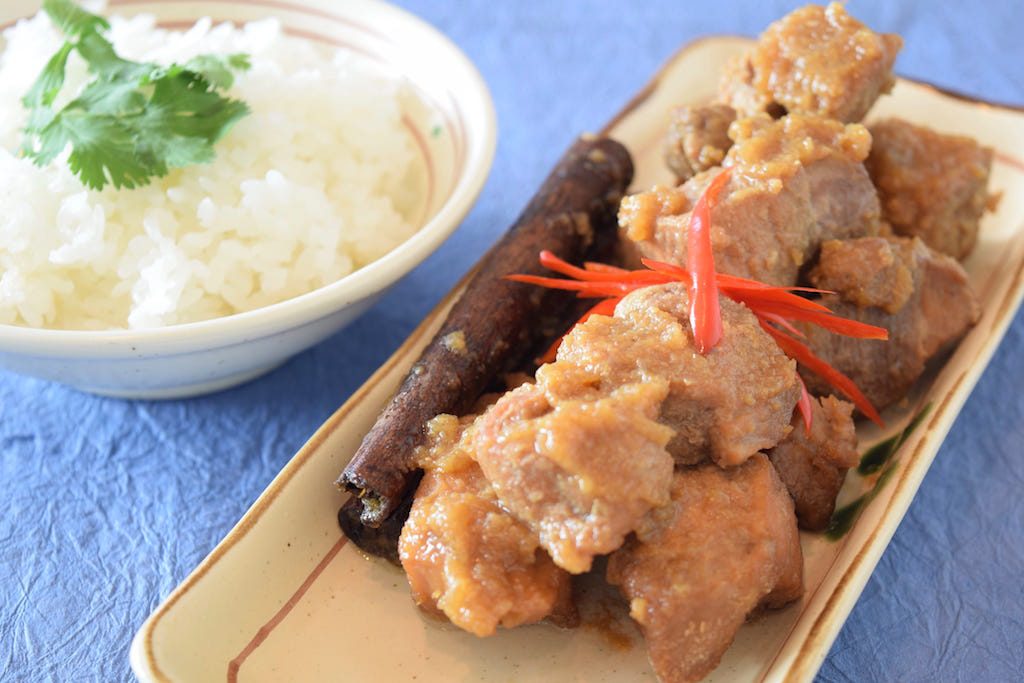