As a former reader of Salon magazine, I came to the conclusion that they were getting too strident, so I stopped visiting their site. They did, however, offer a good recipe or two on occasion, so I thought I’d give this ginger scallion sauce a try.

When reading the Salon (not a cooking magazine) article with the recipe, the author raved about the sauce and how my hero chef, David Chang from Momofuku fame, served his version of ginger-scallion sauce at his restaurants. If Chang is using it, what could go wrong? Well, not much, but the result was kind of a disappointment.

It was delicious, but I think calling it a “sauce” stretches use of that word to the breaking point. I think that calling it a type of chutney or hybrid salsa would be more appropriate. It is NOT saucy, in that you can’t spread it across a pizza crust or spread it on a burger bun. That said, you could use it with anything that calls for a chutney, or even add it to a mild-flavored chip or vegetable dip.

Sauce or not, I encourage you to try it. After all, it’s easy and cheap to make, so if you think it sucks, it’s not a big loss. And if you think of good uses for it, please post them in the comments section. By the way, I poured out a lot of the extra oil in it because it seemed unnecessary.

What you’ll need (I doubled this for a bigger batch):

Run the ginger in a food processor until finely minced, but not puréed. Put it in a wide, tall, heatproof bowl, several times bigger than you think you need. This is important because the bowl size potentially makes the difference between making a mess and not. When the hot oil hits the ginger and scallions, it will splatter and sizzle.

Run the scallions in the food processor until finely minced and add them to the ginger.

Salt the ginger and scallion. The recipe says to put more salt on it than you think you’ll need because the oil will dilute it. I kind of disagree and didn’t add that much salt. After all, we can all go without as much salt, and the scallions and ginger pack a lot of flavor.

Heat the oil in a pan until it just starts to smoke, then pour it into the ginger-scallion bowl. It will most likely sizzle and bubble because of the water in the ginger and scallions. Lightly stir it until it settles down.

Let it cool to room temperature, then refrigerate for whatever you want to use in. 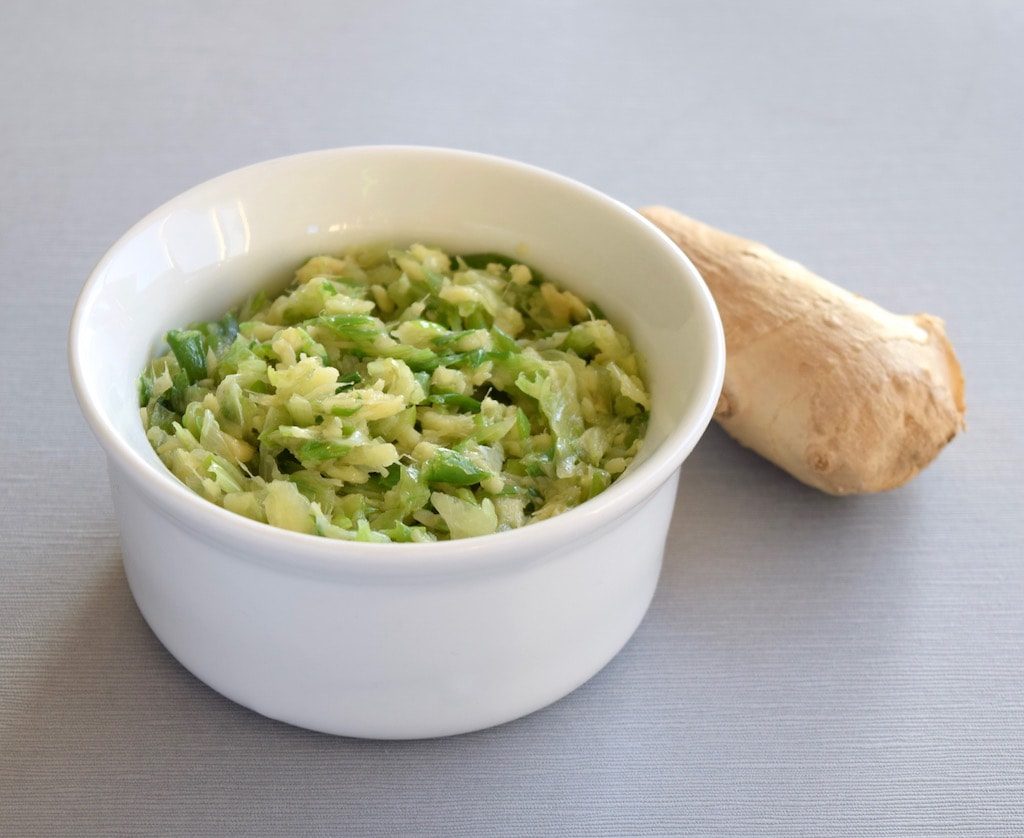