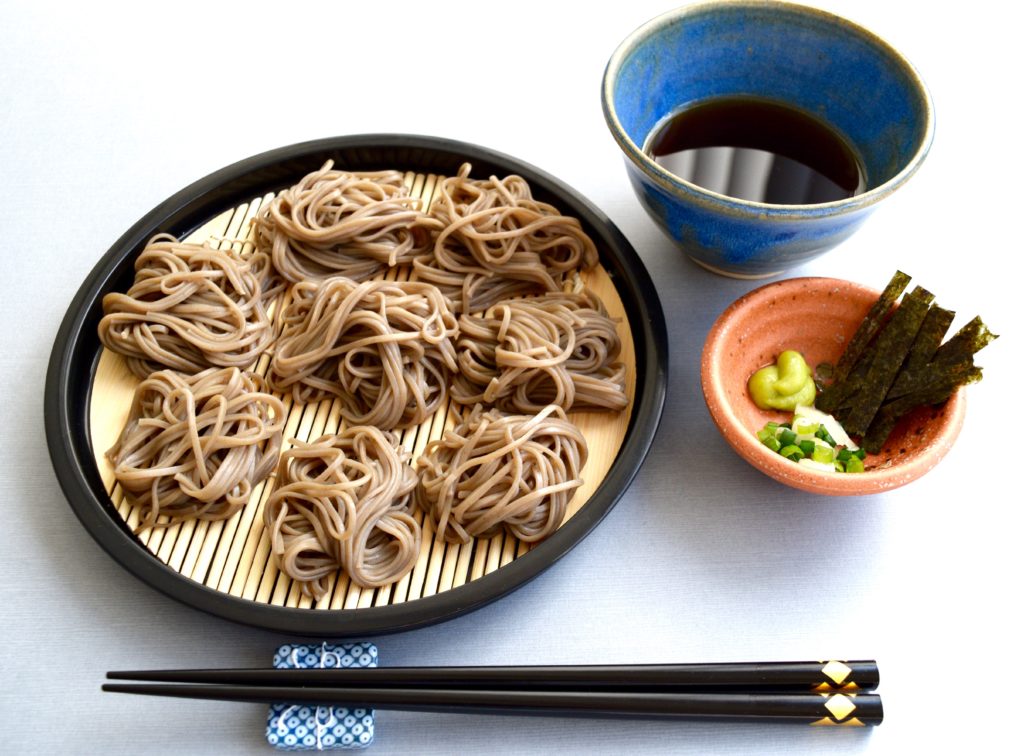 It’s getting warmer these days, so it seems time to start considering a meal or two that are cool and don’t turn your kitchen into a sauna this summer, even with the AC going. Now, I’m not sure if making cold soba noodles really counts as actually cooking or not, but boiling water and a little bit of preparation are involved, so I’ll leave that verdict to you.

Soba noodles are primarily made from buckwheat flour, which makes them much darker than ramen or udon noodles. They’re generally long and thin and come bound within the package in single- or dual-serving packets. Or, Philip shows you how to easily make your own soba noodles here. Keep in mind that these are NOT gluten free. Most soba noodles do have varying degrees of wheat.

By the way, this dish is also called “mori-soba,” depending on the cook or restaurant. A “zaru” is a woven bamboo mat that acts as a type of sieve to drain any of the water left over from cooking the noodles. Traditionally, zaru-soba has strips of nori (dried seaweed) on top, but if it doesn’t, it can be considered “mori-soba.”

What I can say for sure it that zaru-soba is super-easy to prepare, and it’s a great addition to your summer menu. Besides that, it is inexpensive and good for you, so long as you don’t drink the soy sauce-based dipping sauce, which is laden with sodium. 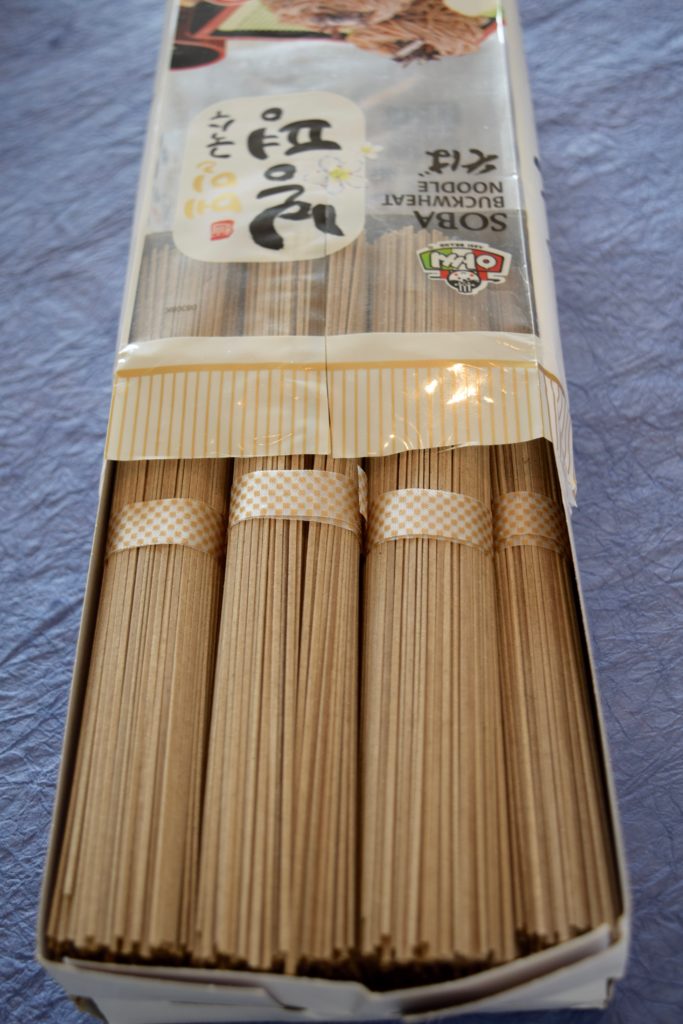 *Found in many Asian and mainstream markets. Almost all tsuyu (even in Japan) is very concentrated.

**Real wasabi is rare and very expensive in the U.S., and notoriously difficult to grow. The green tubes of “wasabi” you can buy are actually horseradish with flavoring and coloring. Real wasabi, which you can buy and have it shipped from this Oregon farm, has a more organic taste, and it doesn’t burn with hotness in your mouth.

While heating the water to boil the noodles, slice up the green onions and cut the nori (if you’re using it) into thin strips. Kitchen shears work well for this.

Put the soba in the boiling water and cook according to the package instructions (typically 3-4 minutes). While the soba’s cooking, dilute the tsuyu according to the bottle’s instructions and divide into a small bowl for each person. I usually add the wasabi at this point, so it dilutes into the broth. Make sure to whip the broth with chopsticks so you don’t get big chunks of wasabi at the bottom of the bowl.

When the noodles are done, pour them into a colander or sieve and rinse well with very cold water. Let them drain for several minutes. You want to get as much water off them as possible.

When they’re drained, you can portion them into small bunches, like in the photo, or just put them in a bowl for each person. If they’re in bunches, you can cover and refrigerate them for later. If they’re in a bowl, it’s best to serve them soon after cooking so they don’t stick together.

For serving, add the green onions to the cold broth and whip it up again, so the wasabi is fully incorporated into the broth. Sprinkle the nori on the noodles. Each bite gets dipped into the broth.

There’s also a recipe for hot soba noodles, but the Feral Cooks will wait until fall for that recipe. 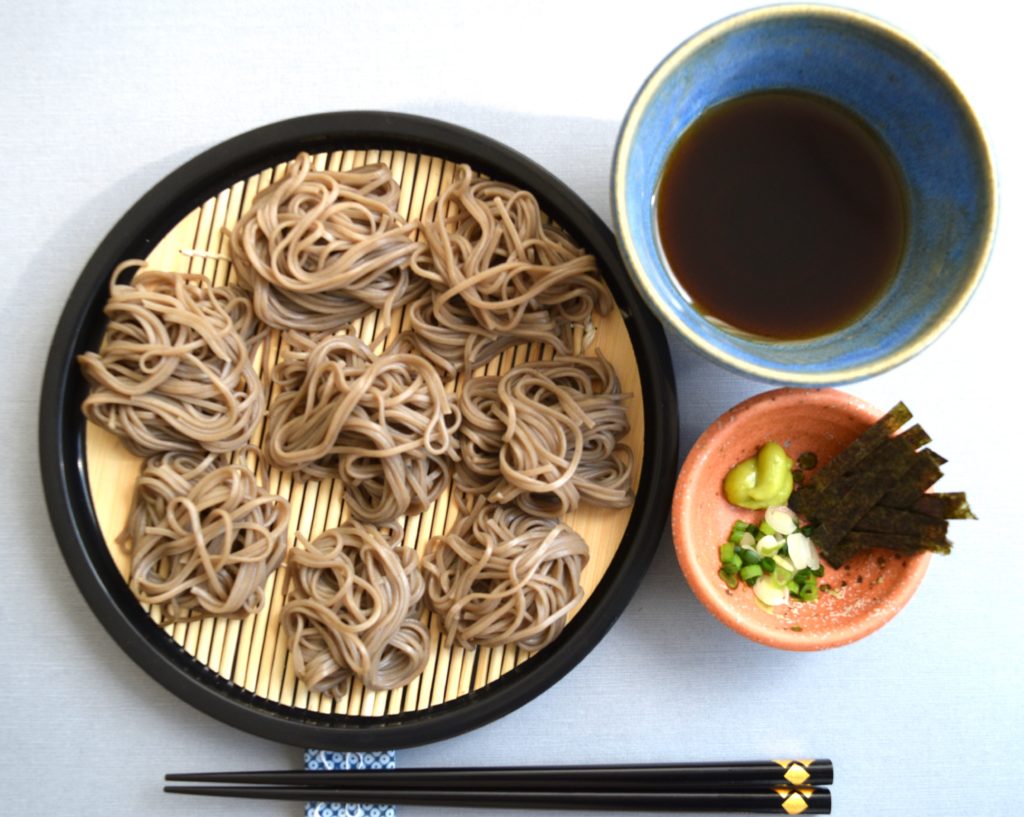